MXGP of France: The Preview! 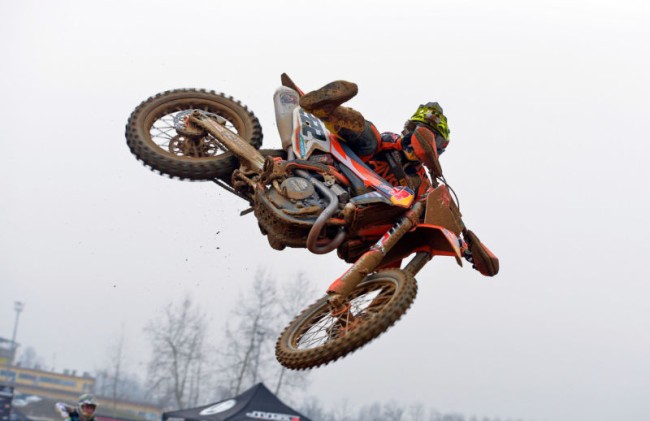 After a one year break MXGP is returning to Ernèe for the 9th round of the FIM Motocross World Championship and the 2017 FIAT Professional MXGP of France. Making a return to the calendar, the last race held at Ernèe was the 2015 Monster Energy FIM MXoN which ended epic fashion with France winning the chamberlain trophy ahead of team USA.

After only a few short days the MXGP paddock is getting ready to race again. Red Bull KTM Factory Racing’s Antonio Cairoli and Suzuki World MX2’s Jeremy Seewer arrive in France with momentum after both added to wins to their resume in Germany.

The circuit of Ernèe will also host the third round of WMX, EMX125 Presented by FMF Racing, and EMX250 in addition to MXGP and MX2.

Red Bull KTM Factory Racing’s Antonio Cairoli, who scored his 80th career win only days ago at the MXGP of Germany is continuing to grow his points lead. Cairoli won here in 2013, the last time the MXGP championship visited the Ernèe circuit. With momentum and history on his side Cairoli will be hard to beat this weekend.

Red Bull KTM Factory Racing’s Jeffrey Herlings continued to impress on the 450 in Teutschenthal as he came from 6th to win race one and took second overall. Herlings continues to say the championship is out of reach now halfway into the season but the #84 is only 84 points off of red plate holder, Cairoli. A favorite for the win Herlings also won here in 2013 but for him it was in the MX2 class.

Team HRC’s Tim Gajser is a champion, a fighter, and about as tough as it gets. Gajser came into Germany sore and beat up from a violent crash in Latvia however impressed as he jumped to the front of qualifying but crashed out of the race and further irritated his wounds. As Gajser raced Sunday it was clear he was doing so to salvage points. Now only one week later the young Slovenian will have to remain focused and put the pain aside if hopes to come back from his points deficit.

Rockstar Energy Husqvarna Factory Racing’s Gautier Paulin reached the podium last weekend and will use that momentum along with his home GP crowd to propel him onto it once again. Paulin finished second overall here in 2013, a result that will be hard to match with the competitiveness of the class but the Frenchman is undoubtedly up to the challenge.

Monster Energy Kawasaki Racing Team’s Clement Desalle finished 4th overall in Germany and 5th here in 2009, however in 2013 Desalle reached the Ernèe podium. Desalle is looking more and more competitive every week and is now 4th in the points.

Monster Energy Yamaha Factory Racing’s Jeremy Van Horebeek has made his way to 5th in the championship standings but is only 5 points ahead of Herlings. Van Horebeek placed 5th in MX2 during the last visit to Ernèe.

Monster Energy Yamaha Factory Racing’s Romain Febvre is coming off of an improved result in Teutschenthal and was part of the winning french team here in 2015. With fond memories nothing to loose, improving results, and it being his home GP Febvre is one rider keep an eye on.

One more rider to watch this weekend is Monster Energy Kawasaki Racing Team’s Jordi Tixier as it is his home GP we may see a career best finish. Tixier finished 6th here in 2013 while in the MX2 class.

Red Bull KTM Factory Racing’s Pauls Jonass lost valuable championship points in last weekend but still has a formidable points gap on the field. Jonass is focused on the championship and knows the easiest way claim it is to win races. With little history at the circuit Jonass will try to take his “holeshot machine” to the podium of Ernèe for his first time this weekend.

Team Suzuki World MX2’s Jeremy Seewer had a breakthrough performance in Germany where he avoided the mistakes that had cost him in the past and closed the points gap Jonass. Seewer will be looking to do the same this weekend.

Rockstar Energy Husqvarna Factory Racing’s Thomas Kjer Olsen had an up and down weekend in Germany where he was 3rd in race one but fell in race 2. Olsen is third in the championship heading to Ernee.

When you have been battling for podium finishes and then get 8th overall your left wanting more, thats where LRT KTM’s Julien Lieber is right now. Lieber made a few mistakes in Germany and will hope to eliminate them this weekend, his now 4th in the points.

Kemea Yamaha Official MX2 Team’s Benoit Paturel finally found the recipe for a good start in Germany and what a difference it made. Paturel won qualifying and was battling for the lead in race one. France is home to #6 and if the starts go well for Paturel we may see a new winner in MX2 this weekend.

Monster Energy Kawasaki Racing Team’s Stephen Rubini is another french rider who hasn’t had the season he’d hoped for. The #118 has only scored 15 championship points this season and he is looking for a breakout performance at home this weekend.