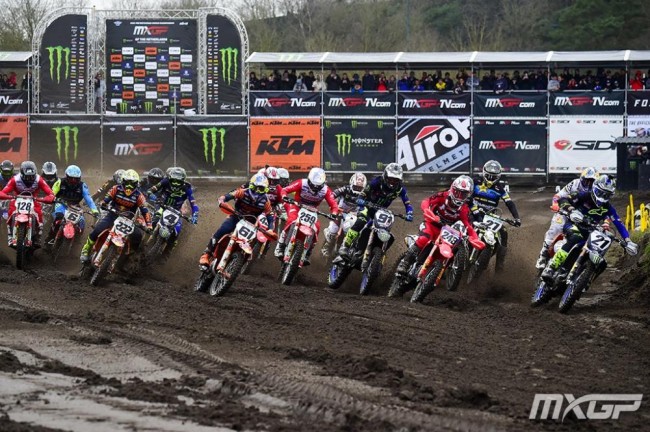 2020 MXGP shuffled back to an August start date with the displacement of the Grand Prix of Russia last week but promoters Infront Motor Racing are contemplating other measures to ensure the best possible state of the current FIM World Championship that has so far logged two of the scheduled twenty dates. The organisers are aiming to discuss the schemes with the FIM and have apparently informed the OATs already.

The first is to run MXGP action on Sundays with EMX European Championship and WMX FIM Women’s World Championship taking place on Saturdays. MXGP would negotiate a Free/Timed Practice and removed the polemic (if occasionally entertaining) Qualification Heat. The timetable has been envisaged as a cost-cutting tool solely for 2020 and would not apply to the flyaways, with trips to China, Indonesia and Argentina still on the list.

“As we will have back to back racing – and in this very special year, we want to reduce the cost and help the teams to face this situation – we will concentrate the European Class and WMX on Saturday and keep Sunday only for MX2 and MXGP,” commented Infront Motor Racing’s CEO David Luongo exclusively. “This change will be valid only for 2020 season and 2021 will come back to normal.”

Perhaps a more radical proposal is allow the 74th Motocross of Nations (set to take place at the Ernee circuit in France on September 27th and in the midst of the reworked agenda of GPs) to carry world championship points. The top-ranked riders in the MXGP and MX2 standings that are not selected by their countries (or their Federations do not enter a team) could compete at Ernee as wild-cards. The reasoning behind the idea gives even more credence to the MXoN as a race event and potentially extends the scope of the MXGP and MX2 classes with Infront still hopeful of as many Grands Prix as possible. “Regarding the MXoN, we have some ideas for the wild cards but we are still in a process to establish the system and we will discuss about all those aspects with FIM first,” David Luongo said. “But I can assure you that the best riders will be present.”

IMR have poured cool water on the possibility of behind-closed-door fixtures (due to spectator-ticketing being a key financial element of a Grand Prix) and back-to-back races at the same venue. They hope to have a solid direction of the 2020 schedule in June, when many other international sports are expected to resume and championships like the 2020 AMA Supercross series will have been completed.