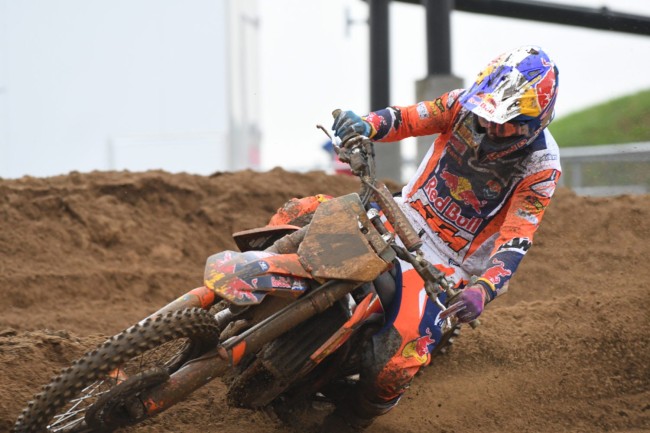 When the gate dropped for the first moto, there was plenty of drama on the first lap. Antonio Cairoli and Ken Roczen both hit the deck around the first corner. MX2 World Champion held the early lead after Jeffrey Herlings himself crashed on the first lap.

Prado held the early lead on his MX2 machine from Gautier Paulin, Herlings was sat in third and looked to take his time to hit the front. The Dutch rider eventually took over the lead and ended up coming home 25 seconds ahead of Gautier Paulin. Herlings commented the track was pretty flat after the race! Jorge Prado was sensational on his Factory KTM as he came home in third.

There was a three way Kawasaki battle going on for fourth with Tommy Searle holding off Eli Tomac and Clement Desalle. Unfortunately, Searle’s bike expired with two laps to go so he had to DNF the race.

Cairoli came from the back of the pack to a sixth so with a better start he’d have been right at the front.

Plessinger suffered from a crash early in the moto to come home in eighteenth. Vlaanderen also had a bike expiry meaning he DNF’d the race.

Martin Barr put in a superb ride for sixteenth and the seventh best MX2 rider beating the AMA National champ.

As of right now France have the early lead in the Nations classification with Paulin finishing second and Ferrandis coming home in seventh.