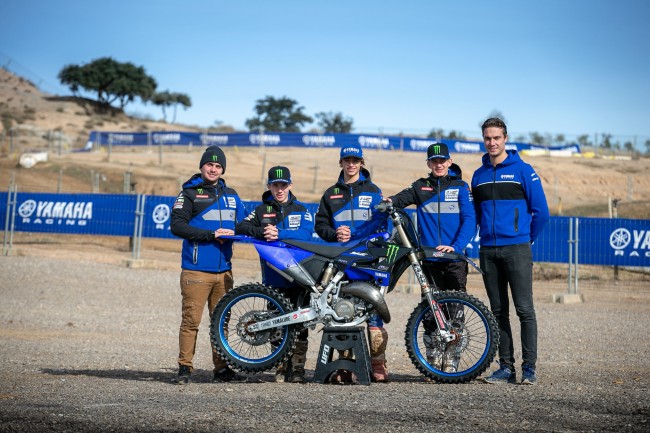 15-year-old Dutch prodigy Kay Karssemakers is already a household name. The talented youngster has an array of World Championship accolades. He was the 65cc Junior Motocross World Champion in 2015, he then went on to claim two bronze medals at the 2017 and 2018 editions of the FIM Junior Motocross World Championship on a 85cc. In 2019, the talented Dutchman stepped up to the 125cc and made his EMX125 debut where he completed a positive first term in the class with three top-10 race finishes during the latter stages of the championship.

After showing solid progress and finishing 16th overall in the 2019 EMX125 Championship where he was one of the best placed rookies, Karssemakers has been named as a title threat as he enters his second full EMX125 season where he will line up on GYTR kitted YZ125 alongside the new rookies van Erp and Pumpurs.

As the 2017 65cc Junior Motocross World Champion, 14-year-old Dutchman Ivano van Erp looks forward to stepping up to the hotly contested EMX125 series with the support of Yamaha’s Official EMX125 team. As does 16-year-old Latvian Mairus Pumpurs who won his place on the team after showcasing his potential on various occasions in the YZ125 bLU cRU FIM Europe Cup program, which included an emphatic victory at the YZ125 bLU cRU FIM Europe Cup SuperFinale that took place at the biggest and most watched event of the year, the Monster Energy FIM Motocross of Nations in Assen, The Netherlands.

All three riders will line-up in 2020 on GYTR kitted YZ125 machinery. They will race the full EMX125 championship, an eight-round series that coincides with the prestigious FIM MXGP World Championship rounds in the UK, The Netherlands, Spain, Portugal, Belgium, Sweden, Finland and Italy.