Mike Kras on going 1-1 at Desertmartin! 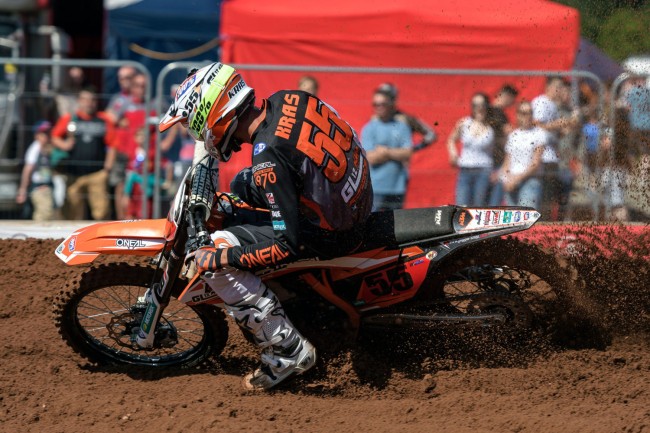 British Two-stroke Championship leader Mike Kras dominated his two races at Desertmartin on Sunday but it was a day of highs and lows for his GL12 Racing KTM team.

While the Dutchman, who’s the defending champion, was racing clear of the opposition his team-mate James Dunn was struggling to find his form and after finishing ninth in the first moto he exited race two with a blown motor.

James had won the last three motos and taken two overalls in a row but he wasn’t on-song in Northern Ireland.

The team now has some rare down-time until the MXGP of Czech Republic on July 22.

“Mike was in a different class this weekend and destroyed the opposition. He gave a masterclass in sand riding that the Irish crowd really got behind.

“James has been a little off since a great display at Matterley which continued in the first race here and our bike let him down in the second which is disappointing for both of us.

“We have a break now and have to look at the best way of seeing the season out.”

“Today was one of those better days. It’s a really nice place to ride and after taking pole in timed practice I really looked forward to racing.

“After taking both holeshots I could push for good lap times and pull away from the rest to run 1-1 and open up a 21-point lead going into the last race at Hawkstone Park.”

“Firstly, well done to Mike today, he rode two solid races. I have been struggling a bit the last few weeks with things and this weekend to have a ninth and a DNF just topped things off!

“We now have a few weeks off from racing so there’s some time for myself and the team to put the work in that we need to so we can finish off the second half of the season as strongly as we know we can.”