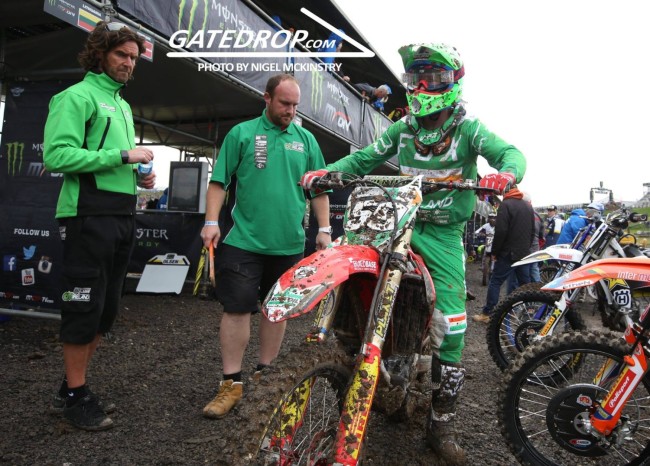 Unfortunately, during the MX Nationals series at the weekend, Martin Barr took a big crash which meant he was out of action for the day.

Irish Motocross Des Nations team manager, Philip McCullough has provided us with an update on his injury.

“Martin had a nasty crash on Sunday in the mainland, resulting in him breaking his collarbone in two places and requiring surgery, the fact that he needs to undergo an operation on it is a good thing, as it will speed the recovery process up!  He is scheduled to go under the knife for his op early next week with a top shoulder specialists in Belfast so all is looking good”, commented McCullough.

The good news is that McCullough has confirmed that Barr will be back to represent his country at the Motocross Des Nations next month.

“Yeah, for sure Martin will 100% be back for the MXON. With the event still over 4 weeks away he will be doing everything to ensure he is back to full fitness for Assen”, stated the Irish team manager.

With regards to making his return to racing, we will just have to wait and see but Barr is eager to get back behind the gate.

“I’ve spoke to Martin regularly over the past few days and his attitude and determination to get back behind the gate is very evident.  He is obviously disappointed that his chance of winning the MX Nationals championship is gone and possibly the Bridgestone Masters title looks like it also will elude him this year, but that’s racing, you have to take the highs with the lows. After his surgery he will see how the shoulder feels, after all Martin has been in this game long enough now to know when he’s going to be ready again”, stated McCullough.

If there’s complications with Barr’s return for the Motocross Des Nations, McCullough has made it clear that Glenn McCormick is the MX2 reserve rider.

“I made it very clear quite a few months back that Martin was my automatic first choice to ride for Team Ireland yet again, nevertheless if there is any slight complications or doubts leading up to the MXON, Glenn McCormick will be drafted straight into the MX2 slot to replace him. As Team Manager it is vital to have not just the strongest 3 riders named, but also to have the best possible reserve riders on standby if anyone picks up an injury”.

“This was very evident last year, with both Stuart Edmonds getting injured, a month before the event in Red Bud, and also Graeme Irwin sustaining a career ending injury just 3 days before we were scheduled to fly out to the states. Richard Bird and Gary Gibson, who I had named as my reserve riders in 2018, filled the 2 vacant positions and turned in some tremendous performances to help Team Ireland achieve a 13th overall position”, added McCullough.