Max Engelen on being forced to stop racing 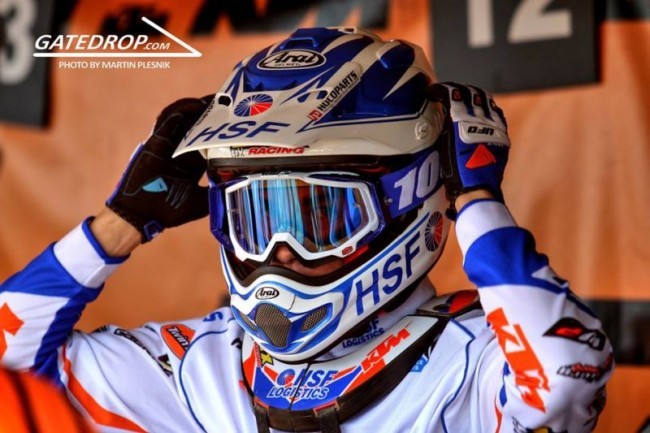 Young Dutch talent, Max Engelen had a promising future in the sport. He had an EMX125 podium to his name and was starting to find his feet on the 250cc before injury forcing him to stop his riding career. Engelen had a good ride in the paddock at the time in the HSF-Logistics KTM team and was tipped by many to have a bright future.

Unfortunately, a huge crash at Lelystad practice track resulted in a serious injury which meant he needed to stop racing – a real shame.

“I think everybody already did see the crash video. It was my second time back on the bike after I got surgery on both arms for the compartment syndrome. I went on Saturday morning to the motocross track in Lelystad together with my brother. The track was in perfect condition and I went for some warm-up laps. There was a new leap which I already had jumped multiple times. I think it was the third lap that I jumped the leap again that day, because of a little rain the new jump got a bit softer. I got a kicker but managed to stay on the bike. The fourth lap I went for it again but chose a different rut, big mistake! I got a big kicker again and landed head first with the bike in my back. The result: two shattered vertebrae’s and a ruptured bowel. I had to get surgery on my back, they fixed 7 vertebrae’s together to keep it in all in place, this fixation will last a lifetime”, Engelen told GateDrop.com.

You can see the crash here:

Here is the crash video. I’m lucky to say I’m alive. I bruised several organs and have small cuts on my face due the faceplant. I am still in a lot of pain but I have some good medication. Hope to see everybody quick back on track.

At first Engelen thought he’d be able to race again at a high level but as times passed reality hit him that his Motocross racing career was over.

“Of course I felt very disappointed and devastated. All the blood, sweat and tears seemed for nothing. Actually, in the beginning I really thought that I would get back on track. But after the weeks passed it became clear to me that it would no longer be possible”, concluded Engelen.

We have more coming from Engelen so stay tuned as he discusses his career and more.