Marcus Schiffer on winning the MXoN with Germany – A dream 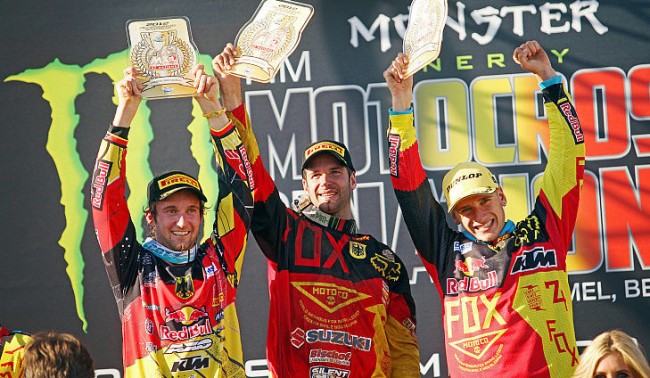 The 2012 Motocross Des Nations was held at the rough sand track of Lommel in Belgium. The German’s came in with a team of Ken Roczen, Max Nagl and Marcus Schiffer. A solid team on paper and they certainly went into the event as underdogs but they ended up surprising everyone and did the unthinkable – won the event.

Marcus Schiffer had a crash just three weeks before the event and wasn’t sure if he’d even race in the build up to the event but he ended up impressing and excelled at the rough and gnarly sand track.

“This was a really tough weekend with tough races in front of us. Lommel is a very difficult track but actually we all felt comfortable at it, but you never know what happens here as the track conditions change every lap. As everyone knows I love to ride sandy tracks, so I was happy that the MXoN was in Lommel, this is kind of a home track for me. Three weeks before the event I had a really bad crash at the MXGP in Faenza, Italy. But if you are nominated to race the Motocross of Nations you don’t think about the past, you just try your best for the Team and push as hard as possible. The Saturday was actually already pretty good for us, so we had a good starting position for the Sunday”, Schiffer told GateDrop.com.

Being in the open class, Schiffer had two races back to back and faced the track in its worst conditions of the weekend. He ended up 7-14 in the moto’s which was very solid and it allowed Germany to take the win.

“My first heat was awesome, I wanted to save some power at the beginning but during the race I felt great so I start pushing really hard and was 7th place in the end. If I knew that I have power till the end I would have pushed from the beginning. The 7th place was a great effort in the end but I could have ended also on the 6th place, but we were all happy with this achievement. I didn’t have so much time between my races, we needed to get the bike ready and I had to relax a bit to find as much strength as possible for the second race. Meanwhile Ken and Max rode a great race as well, everything went well. My second race was not so good like my first one, as I couldn’t push like in the first race. But this was no problem we could cross out my 14th place from the results. So, in the end we made the impossible possible for us and for Germany this time”, Schiffer added.

Schiffer admits he couldn’t believe the German’s had won and it felt like a dream. To make it even more impressive, Schiffer wasn’t even a full time GP rider at the time, he’d only done selected rounds of the series that year so wasn’t used to racing at that level every week but it certainly didn’t show on the day.

“It was just incredible. You can’t believe it and you feel like you’re in a dream. After we were standing on the top of the podium, I felt so happy and all the pressure was gone and I was so proud of what we had achieved. It was simply an amazing feeling to celebrate together with the crowd on that sunny weekend. Definitely one of the best moments in my Motocross Career and I am happy that I was a part of this success”, concluded Schiffer.

The German’s have some fast young guns in the paddock at the moment such as Henry Jacobi and Simon Längenfelder who will want to taste the same success as Schiffer in future and with hard work, who knows what can happen in the future.