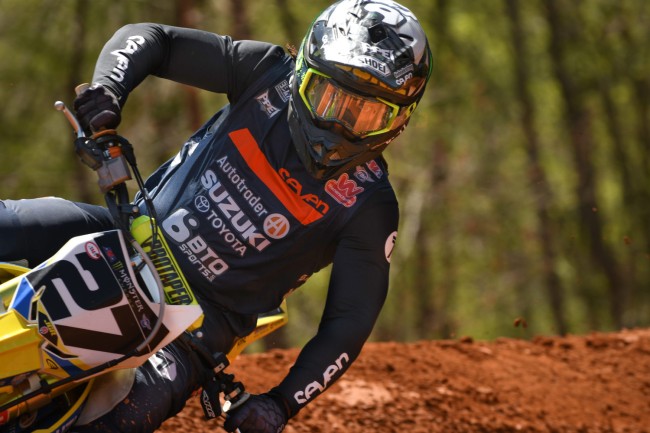 Doug Turney caught up with the always entertaining and naturally talented Malcolm Stewart at the JGR facility to discuss his season, riding outdoors, James and even his fitness!

Stewart has again showed flashes of speed this year with his best result a sixth place at Indy to underline his talent on a big bike.

Stewart, as always, was cheerful, relaxed and honest with his answers and you can see why he fits in well with the relaxed but competitive JGR environment.

You see to be one of the most relaxed riders out there, every time I see you in the pits you are always having a good time?

Coming up here for JGR I have been staying here in my motorhome since Atlanta. They are good people, man. I remember by brother here back in like 2012 and always had a great time at that.

I have known J-Bone and some of the guys as far as I can think back because they were at Kawi and J-Bone used to be my brothers mechanic back in the day as well as Dean our motor guy. it’s one big happy family and the fact they all saw me grow up, it’s like their second child! (laughs).

But so far it’s been going well, we have had some ups and downs during the season but we still make the best of it. The team is always real positive, I couldn’t be in a better or happier spot. Yeah it was a fill-in ride but  have turned it into a full season supercross ride but I have been enjoying it as it goes.

Talk about the outdoors for you..

I am not sure, Bogle will be coming back at some  point and there area  couple of other guys on the list as well as me so you never know exactly what is going to happen. At the end of the day my job is to do supercross and I will focus on that until I hear anything else.

I do want to race outdoors but I cant do it on my own, I might do a couple of rounds, maybe the closest ones like Red Bud and  Budds Creek. The good news is I might try to do the Des Nations since it’s at Red Bud. But my job is to focus on these last couple of supercross and we will worry about the rest when it comes.

Outdoors is coming up soon, there are already a lot of riders testing so I guess I better get my butt in gear and figure out what I am going to do.

Everybody knows my speed is there, we just have to have a legit programme. Obviously now the  programme with JGR has stepped up and the results are coming but starting off the year, you need to get your months before Anaheim. It’s tough being a privateer when you don’t have your ducks in a row. Each and every race I learn more and more,  am happy with position I am at.

There was an article in another publication that took you to task on your fitness, did you see it, was it a fair assessment?

Everybody knows I am not the fittest guy out there, when I was in the Lites class it was different but when you go from winning to nothing it’s hard. We are getting there and getting better, my best finish was a sixth at Indy but I should have had a podium if I had the fitness, I won’t lie about that. That was my best career finish so how mad can you be at the end of the year. If I had a legit shot for full year deal, Buddy Antunez is helping me out tremendously with working on my program and stuff like that so he has definitely got me more in shape.

Talk a wee bit about Seattle, what went through your mind when you went out for first practice?

I was actually glad it was so muddy so nobody could jump anything. When it gets to the point when people can kind of jump stuff – that’s when it gets dangerous . It was fun for practice then in the race it was terrible!

Everybody had to ride through it in the main event we were going good then we had a bit of an issue. You can’t expect anything less in mud race but I wasn’t even mad I was kind of laughing because we knew where we would have finished if we would have finished but you have to keep moving forward, it’s just one race, you can’t give up.

Tell us something no-one knows about you or the team…

I’m friends with some of the football (NFL) players, if I didn’t race I would be a football player or professional fisherman or a drag racer. As soon as I finish Salt Lake I am going to the drag race in Charlotte!

What’s the one question you get asked all the time?

Everyone always wants to know where my brother is, for the last two years! But he’s good I talk to him every day. He’s hanging out and having fun just like anybody else. It’s unfortunate some people don’t agree with what he has done but it’s his decision, he has won everything, when a guy goes 24-0 it kind of shuts everybody up! (laughs)

Stewart on the gas at Foxborough. Pic: Doug Turney

What does Uncle Malcolm do to spoil the nephews?!

I’m going to teach him all the bad stuff that’s why he going to love me! I’m going to be his best friend for sure!