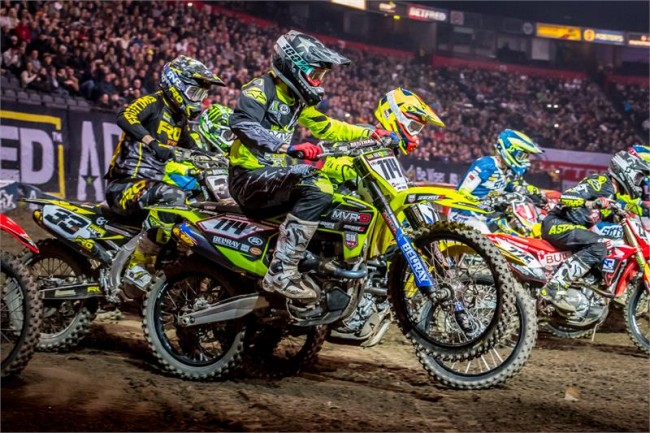 ASL, the organising team behind The Arenacross Tour has unveiled its plans for a major shakeup to the AX championship format for 2019.

The completely-new race-night set-up will see 12 riders, of the highest calibre, contest each of the Pro and Pro Lites Main Events, with the top six from each group automatically seeded through to the evening’s climax; The Super Final Main Event.

On the Pro class front, 12 of the best indoor Pro motocross riders from around the world will compete in two-rider teams, with a substantial pot of cash up for grabs for both individual riders and the team itself. The Pro Lites category receives a radical transformation for 2019 in that, not only will the class be restricted to the very fastest riders of 18-years-plus, but the overall top six from each round will be guaranteed a pass through to the Super Final and get to mix it with the Pros at every round.

Each Pro and Pro Lites class will race two championship points-scoring qualifying races; Main Event 1 and 2, on each night of Arenacross. The top six overall scorers from each Main Event will transfer to the one combined Super Final and, to make it even more interesting, the top six Pro Lites qualifiers will get priority start-gate pick.

Adding to the tension and, prior to the climax of the evening, the four Pro and Pro Lites placed seventh to 10th in each class, will filter through to an eight-rider Head-to-Head eliminator. The winner will go through to the Super Final. All non-seeded riders will race in a ‘Last Chance Qualifer’ aka LCQ, in a bid to claim the all-important 14th start position in the Super Final Main Event.

Arenacross Tour tickets are on sale now, with prices from just £12 for a child visitor on Friday evenings and substantial discounts for two-night tickets. Arena doors will open at 6pm at each round, with the opening ceremony getting underway at 7.30pm.

Advance tickets and further Tour information is available at www.arenacrossuk.com