Looking back at great race memories for Steve Dixon 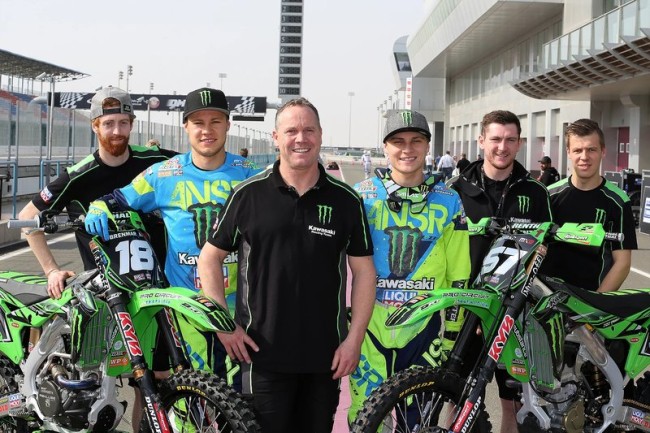 Steve Dixon has been in the Motocross paddock for a number of years and today (8th April) he turns 56 years old – Happy Birthday Steve. Not only does he run a professional Motocross team but without him there probably wouldn’t be a British GP either!

We take a look at some of the best race memories for Dixon throughout his time in the GP paddock.

Paul Malin: The Brit is now the voice of MXGP as he does the commentary for the World Championship but what a career he had himself in the Motocross world and especially under the watchful eye of Steve Dixon. In 1994, Malin was part of the GB team that won the Motocross Des Nations. In 1995, he rode superb to win the British GP as well as becoming British Champion. However, 1996 topped all that as he finished second in the 125cc World Championship behind the talented Sebastien Tortelli. Dixon played a key role in Malin’s career and can look back to those years with very fund memories.

Billy Mackenzie: Steve Dixon and Billy Mackenzie worked together for a number of years and the 2006 season was a real turning point. Mackenzie went 3-1 to win the Japanese GP that year in what’s a great memory for both.

“The team are delighted for Billy. We have worked together for seven years now and this season has seen a turning point in his career with a race win in Spain and a podium in Portugal followed by his best result in Japan. To do it in front of all the senior Yamaha management is great for Bike it Dixon Yamaha and can only help to increase the credibility of the team”, Dixon stated on the victory.

Matterley Basin 2006 Motocross Des Nations: Dixon was the main behind running the 2006 Motocross Des Nations and what an event it was – one of the best MXoN events ever. America won the event from Belgium but Stefan Everts was the real star of the show going 1-1 and passing Bubba Stewart around “Everts corner” – what a memory. The atmosphere was absolutely electric that day and will always be remembered.

Zach Osborne: Steve Dixon often looks to the American or Aussie paddock for riders which can often be risky but midway through the 2008 season, Dixon drafted in Zach Osborne who went on to repay the trust he was given. The first GP for the American was in Belgium and a a solid eighth in the first moto was a promising start. The American then won his first moto in Ireland three rounds, Fairyhouse – good memories.

Osborne’s first full year in the MX2 World Championship was in 2009 and he won the Turkish GP going 3-1 on the day beating top riders such as Musquin and Paulin who joined him on the podium that day. That would end up being his only GP win but nine podiums wasn’t exactly bad and he had his best year in 2010 finishing fourth in the championship up against the likes of Musquin, Roczen, Frossard, Herlings and Tonus to name a few. Dixon can be happy he drafted in Osborne as they both had plenty of success and there’s no doubt the American improved as a rider.

Dean Ferris: In 2013, Dixon turned to Aussie rider Dean Ferris and he went onto have a strong season. At the Belgian GP at Bastogne, Ferris went 1-1 to win his first and only GP overall. The Aussie did have four GP podiums though and ended up sixth in the championship standings. The Aussie says his bike at the time was the fastest 250cc in the world that year – that’s possibly the best compliment he could give Steve Dixon.

Max Anstie: For the 2014 MX2 World Championship, Dixon signed up young British talent, Max Anstie who had spent a number of years in America but was entering his fourth year in the MX2 World Championship after stints with Factory CLS Kawasaki, Gariboldi Honda and Factory Suzuki. Dixon saw enough potential in Anstie to give him a ride and the Brit would stay under Dixon’s awning for two seasons. In 2014, Anstie was on a Yamaha but then Dixon switched to Kawasaki for the 2015 season so even though Max was staying with the same team he needed to switch brands – again!

The first GP win for Dixon and Anstie came in Belgium, 2014 as the likeable Brit won the GP of Lommel. 2015 brought the most success for Anstie under the awning as he won three GP’s that year and he finished third in the MX2 World Championship behind Gajser and Jonass. Dixon and Anstie still have a good relationship today as Anstie very nearly signed for his team this year before opting for America. Don’t be surprised if the pair cross paths in the future.

Courtney Duncan: Despite being such a successful team in the paddock, it’s not easy competing against the full factory teams but Courtney Duncan give Dixon A world championship last year by winning the 2019 Women’s Motocross World Championship. The Kiwi will be back under Dixon’s awning in 2020 to hopefully do the same again!

Dixon has enjoyed plenty more good memories with the likes of Carl Nunn, Arnaud Tonus, Gordon Crockard and Andrew McFarlane just to name a few and he’ll be hoping Wilson Todd can give him plenty more when we go back to racing.