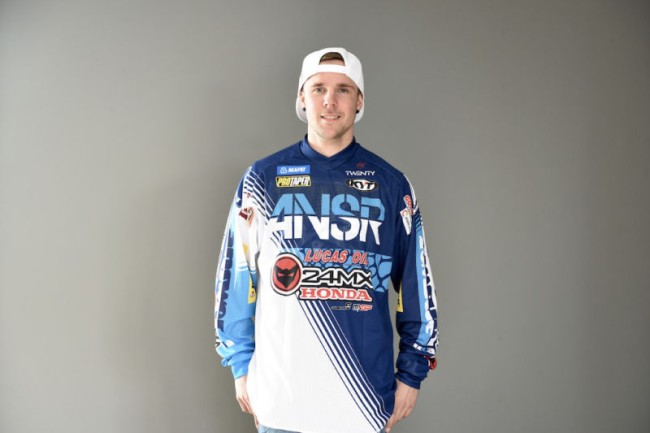 Tuesday, March 22, 2016 — The newly formed 24MX Lucas Oil Honda team will make its MXGP debut at Valkenswaard with Steven Lenoir. The British MX2 champion was drafted in after the injuries of their permanent riders Ken De Dycker and Matiss Karro.

In a freak coincidence 24MX Lucas Oil Honda lost both riders just one week ahead of the MXGP season opener in Qatar. With back-to-back overseas events, the time was too short to bring in suitable replacements for Ken and Matiss on such short notice.

Frenchman Steven Lenoir will be making his MXGP debut in Holland. The 24-year old former EMX250 champion has been focusing on racing the British scene lately. After four seasons in the UK Steven has amassed Britsh MX2 and MX2 Nationals titles and a string of podiums. Lenoir made a successful transition to the 450 bike this winter, he underlined his potential with podiums in French international races earlier this season. Furthermore Lenoir is known for his ability to provide valuable technical feedback, as such he’s also test rider for Bos suspension.

Steven Lenoir: “This is a pretty cool opportunity to return to GP racing! I feel strong for the moment and racing on the 450 bike is something that fits my style. As far as racing the world championship goes it’s been a while but I think that all those years racing in England have helped me to become the rider I am today. I have definitely improved, matured and I’m more rounded I would say. First of all I want to enjoy this experience and make the best of the occasion without any kind of pressure. I have to say thanks to my team boss Paul Hobbs (Team Dyer and Butler) for allowing me to race in GPs and to 24MX Lucas Oil Honda for their kind invitation!”

Marc Boone: “We’re looking forward to go racing now. The last couple of weeks have been very difficult but we’re pleased to get behind the gate with Steven (Lenoir). With Steven we have an exciting young rider on our bike and although he doesn’t have a lot of experience on the 450 we immediately noticed his professionalism and his hunger. However all of this would not have been possible without the understanding of his team boss. Therefore I’d like to thank Mr. Hobbs. We also talked to Tanel Leok. Unfortunately a deal with him fell apart at the very last minute. It’s a shame but it’s one of those things that come with the territory.”