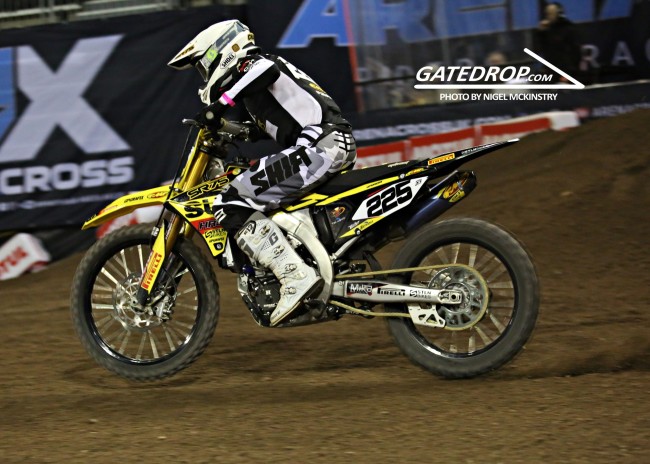 Going in to the Wembley AXUK Finale in a close battle for the AXUK Pro 450 Championship is not unusual for the team and the slender 8 point advantage Charles had in the title chase going into the two 450 finals, and one double points paying Superfinal made this a very tight race for the championship and all the pressure that brings to the table for Charles and for the team.

Both Charles and Nico were determined to give 110% at the grand finale and they would both show a new level during the Wembley event with Nico ready to give it everything on his RM-Z250SR machine on his final ride in the AX Lites Pro Class.

Both riders knew how important a good time would be and Charles looked in control as he shook off some early nerves as he got back into the groove of AXUK to make a solid 3rd overall in times behind Dan Reardon and title rival Thomas Ramette.

Nico had his best session of the series in first qualifying with 3rd best time just a fraction off the two big guns of the lines class Brian Hsu and Cedric Souberas and he would end up 4th overall going into the night show.

With every final weighing heavily on the Championship chase it was important for both guys to get to the sharp end all night and fight for every point and the tension was off the scale going into the first of the 3 finals as we knew one small mistake and the title could be gone.

Nico got his night off to an average start with a battling 6th place after colliding with another rider and twisting his bike up while he was trying to come through the pack on the most intense track of the series. This would mean his second Lites main event would have to be an absolute blinder to make a direct transfer into the superfinal.

Charles was up next for his first Pro 450 Main Event and the guy had no intension of showing any nerves as he blasted to yet another fantastic holeshot on his RM-Z450SR machine…. Charles took control of the race and put on a show of strength as he raced with total focus to take win number one of the night and extend his championship lead to 9 points over Thomas Ramette.

AX Pro Lites Final number 2 got underway with our guy Nico Dercourt in no mood for anything but a ten lap battle. Nico blasted his RM-Z250SR bike to a brilliant holeshot and took the lead for the first half of the final. A couple of mistakes late in the race seen Nico drop to third position at the flag but this was a show of what he and his race bike were capable of after the disappointment of Birmingham.A direct transfer in 4th overall after the lines finals was reward for his efforts.

AX Pro 450 Main event two was ready to get underway with a very focussed Charles Lefrancois on the gate. Charles exploded to another incredible holeshot and he set about finding his rhythm on the technical track as the conditions and lines changed. After getting some line choices dialled in Charles controlled the final to take another insane victory to extend his championship lead to 12 points over his title rivals.

The tension was high all event but as the superfinal lined up with Nico going to the line 4th and Charles 6th the tension was off the scale both behind the scenes and in the packed Wembley Arena….

Charles knew he had to get another great start and he did not disappoints he took the final holeshot of the 2020 AXUK Series… Nico was buried in the pack but this guy would battle to the end for every position. Charles showed his class and determination to become Champion running up front as his closest rival Thomas Ramette had a first lap crash which would effectively end his title challenge. The 225 RM-Z450 was out front and Charles soon understood the title would be his as long as he stayed cool and out of trouble. Charles put on a masterclass of clear, championship thinking as he reeled off the laps at a safe pace, steering clear of the battles to bring his Championship winning ride to the chequered flag in 4th position in the most solid and professional of races while Nico battled in the group to bring it home in a brilliant 7th place.

The emotion was overwhelming for Charles as this was his first Pro racing Title in his career and the genuine show of total emotion was clear for all in the Arena to see…. In this world it is amazing to witness this level passion from an athlete and the appreciation from the fans inside the Arena was brilliant.

“My emotion is clear, I wanted this title so bad and I wanted to show what I can do with my progress in this amazing team. I have worked so hard with one big focus since my disappointing Birmingham second night and I knew I have big pressure coming into this race tonight. I don’t know if everyone think I can win but I proved myself to myself and I am loving this amazing feeling. I am so happy for my team and my family and it is amazing to make this show for all the people. This is my first pro title and I thank everyone in the team and every supporter and my family who never let me stop working for this feeling. Thank you everyone”

I am very happy tonight with my progress on the awesome RM-Z250SR bike. I love riding this bike and I have big fun tonight when I holeshot and lead the second final. I am a big guy and it has been great fun to race this Championship with SR75 in my new position in 2020. I am so happy for Charles as he is a fantastic team mate in this amazing team and he deserve this Championship.He was amazing out there all day and night.I want to thank the team and all the team sponsors and supporters here at Arenacross Uk and I hope have made a good show for everyone”

This is an unreal feeling to take another title here at Wembley Arena. We love it here! The guys and everyone around us have been amazing and the focus coming into tonight was on one goal and that was the AX Pro 450 Title. Charles has tonight taken himself to a new level with the determination and passion he has shown to rise above the pressure and nerves to go out there and not defend, but absolutely crush his title rivals in a way that few would have believed. The series has been amazing and both Charles and Nico had had their ‘experiences’ thought but we work to overcome every situation and tonight we showed what we are all about. To have Charles take his first Pro Racing Title as an SR75 athlete is a big emotion and it was clear to see how much this meant to him and to the crew and team as a whole as we work every day to make the positives happen. I want to thank Charles and Nico for their work and I want to thank Paul and Tony for their work in the pits to help keep the bikes running perfectly throughout the series. We are a team who appreciate every one of our team partners and supporters and we hope everyone connected with SR75 HRS SUZUKI can enjoy this title with us and look forward to everything the future holds”.