Lawrence: This isn’t where I want to be! 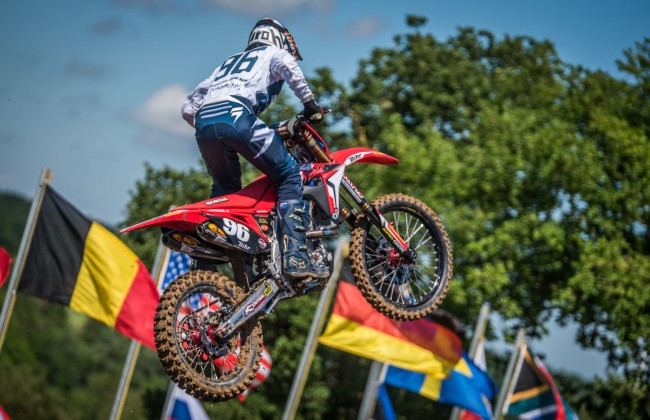 The hilly St Jean d’Angely track had a real mix of weather over the course of the weekend, track was tough but we have seen some good racing in front of the French Crowd.
Hunter Lawrence suffered at the hands of the track as he battled his way to a 10th place overall. It wasn’t an easy track to ride as the hot temperatures and Saturday night thunderstorm combined to leave the track a mix of hard pack and ruts, but Team Honda 114 Motorsports’ Lawrence showed good speed as he fought through the pack in both races. He was rewarded with a sixth in race one, but was unable to match it in race two, however he now heads to Italy with a bit more race fitness and a bit more of a feeling of the pace he needs to ride if he is to challenge for the podium spots once again.
Bas had an hard week end as well, coming back after few weeks off, he was feeling good and almost 100%. Unfortunately he had too many crashes during the week end. He decided to not race the 2nd moto due to a strong headache. he is now focused on the next Round where he scored his best carrer result last year in Mx2.

After two hot weekends in a row, the next round for all three of these series is at the Italian sand track of Ottobiano where brutal temperatures greeted the riders last year around. With more of the same forecast next weekend, this season of the world motocross championships is really testing both man and machine.

Livia Lancelot: “It was my first Home GP as Team Manager and I enjoyed it quite a lot! Of course we expected better results but still it was good to have both Bas and Hunter back under the tent. Hunter isn’t 100% yet but his speed was good and we are going on the good direction. Bas unfortunately had too many crashes during the week end, which doesn’t help him to improve and come back on the highest Level. I really believe that better days are coming”

Hunter Lawrence: “The first moto wasn’t great off the start as I crashed because another rider was doing crazy stuff, so I had to regroup from last place after that incident. I was coming through the pack well though, showing good speed and I got back to sixth. Unfortunately I hit a bit of a wall with about 10 minutes to go, so I had to settle for sixth, which wasn’t too bad given the start I had. In the second race I was perhaps a bit too impatient and I clashed with another rider on the opening lap again. I fought back to around 10th place and was making a move on the red plate holder Pauls Jonass when I picked a rut that had caved in, and I lost my front wheel and fell over. I tried my best to salvage whatever I could get and that ended up being 13th place for 10th overall. I think this weekend was just about positive because I got some more bike fitness but this isn’t where I want to be, so I need to keep fighting hard to improve.”

Bas Vaessen: “The week end was exciting, I was so happy to be back racing, I didn’t expect any result, just wanted to get back on the bike and racing ! Saturday I had some rear brake issue due to the big ruts which was nobody’s fault but I was happy about my speed. Due to the Storm Sunday the track was really muddy, I had a lot of fun during the warm up as I like this kind of conditions but I made a small crash during the warm up and hit my leg again, I tried to ride the first moto , but I didn’t feel comfortable  and finished 17th. So we decided to not race the 2nd moto to be more safe and more ready for the next GP.”