Laia Sanz on her top twenty result at Dakar Rally 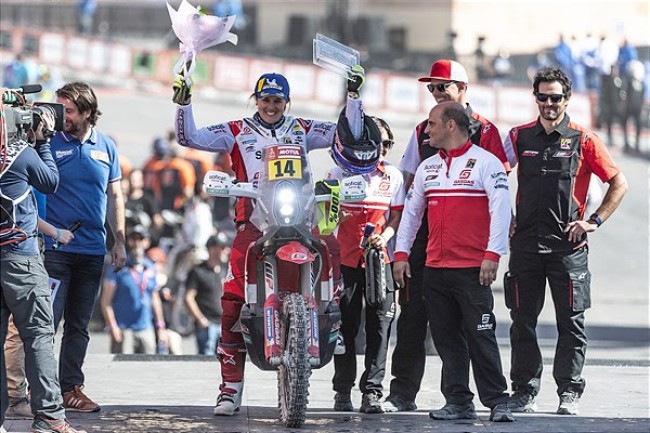 Continuing her incredible Dakar Rally finishing record, GasGas Factory Racing’s Laia Sanz has once again reached the end of the world’s toughest rally. Bringing her GasGas RC 450F home in 25th position on today’s 12th and final stage from Haradh to Qiddiya, the Spanish motorcycle star has once more rolled onto the Dakar finishing podium with a highly impressive 18th place overall result.

Laia Sanz: “I will remember a lot about this Dakar. Of course, I will remember Paulo, a true Dakar warrior. So, I have mixed emotions. I will also remember it because it is the race that I managed to start and finish my 10th consecutive Dakar, this is something I am very proud of. I think I’m the first Spanish rider to do that. Dakar is never easy, but when you have a crash it becomes so much harder. So, I’m pleased that I managed to overcome everything and finish the race, and also to have been the first rider to represent GasGas Motorcycles. It’s not been the best for me in terms of my overall result – after my crash on stage two I was riding in a lot of dust and the average speed was a little too high for me during the second week. I’m proud of what I’ve achieved and want to thank all the GasGas Factory Racing team for their support.”

Successfully completing the event’s marathon stage, today Laia was faced with a 447-kilometre stage and a 374-kilometre special. Thankfully, the closing day of the 42nd running of the Dakar Rally passed without problems for the Spaniard, allowing her to bring to a close what has been a mentally and physically tough two weeks of racing in Saudi Arabia.

Hopeful of a top-15 motorcycle class result in 2020, Laia made a cautious start to her Dakar campaign before an unfortunate fall on the first day of the super marathon stage hampered her progress. Damaging her navigational equipment, and with her team not allowed to assist her, she was forced to ride on, often spending large amounts of time caught in dust from riders ahead of her. Proceeding with caution, Laia battled on to reach the mid-race rest day.

The start of the second half of the Dakar Rally proved to be hugely difficult for Laia and the entire Dakar family as Paulo Goncalves – a rider Laia knew well – tragically lost his life. Cancelling stage 8 as a tribute to Paulo, competition resumed on stage nine with Laia successfully completing the 886-kilometre day. Taking no risks, Laia then completed the event’s marathon stages to move within touching distance of the finish.

In completing the 12th and final stage Laia not only cemented her position as the world’s #1 female motorcycle racer but in reaching the finish of a 10th consecutive Dakar Rally she becomes a true Dakar legend.