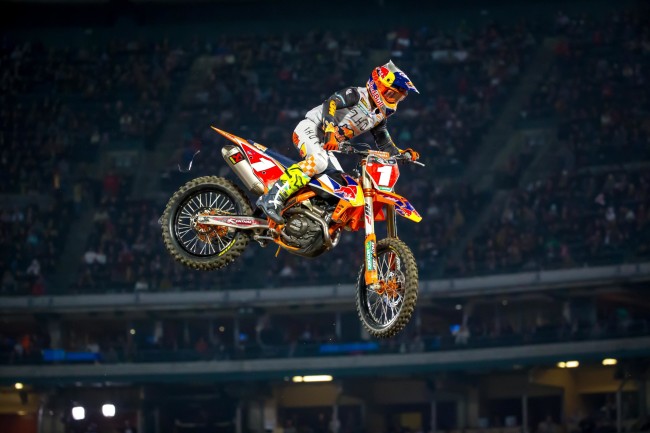 The Red Bull KTM Factory Racing Team has confirmed that Cooper Webb plans to line up this Saturday, February 29 for the ninth round of the AMA Supercross Championship in Atlanta following a nasty crash last Saturday in Arlington, Texas.

The reigning 450SX Champion suffered the crash during the second Main Event of the Triple Crown when he lost drive going up the ‘dragon’s back’ section and landed on the front wheel, flipping into the cement. After being transported to a local hospital in Texas, doctors assessed Webb’s injuries and reported a severe bone bruise on his left pelvis/hip and a hematoma on his sacrum/tailbone.

Team Manager, Ian Harrison: “Cooper is extremely lucky to have only sustained minor injuries from his crash on Saturday and he will be taking it easy this week to allow the swelling to subside. As we all know, Cooper is a very tough and determined rider so we know that he will do everything in his power to line up this Saturday in Atlanta.”

Webb and the Red Bull KTM Factory Racing Team are set to head to Atlanta, Georgia this weekend for the ninth round of the AMA Supercross Championship at Mercedes Benz Stadium.