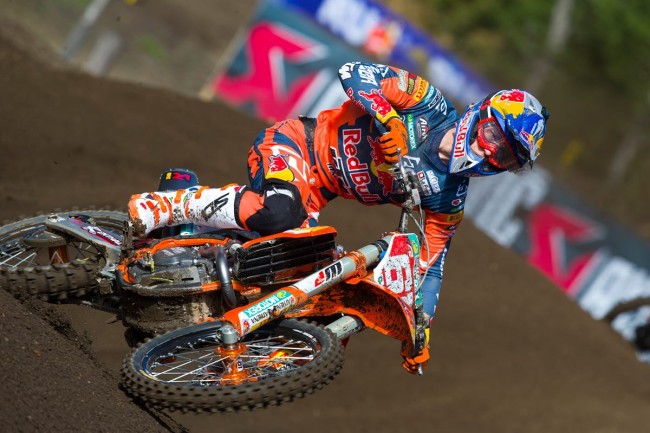 If the eighteen year old renews his MX2 title this year – and looks in ominous form at the Grand Prix of Argentina where he went 1-1 – then, according to FIM rules, he is obliged to move into the premier class and make his debut for the 2020 season on a KTM 450 SX-F. The Spaniard has blended with Claudio De Carli’s section of the Red Bull KTM team to devastating effect and moving into MXGP is the only route for continuing that relationship and remaining in Grand Prix. Prado has publicly stated his fondness for supercross and spent a winter riding and training in the United States ahead of his 2016 EMX250 campaign so a transfer to the Troy Lee Designs KTM crew in the AMA would be another option to stay on 250cc machinery.

The title defence regulation initially came into play during the 2012 campaign and to further shape the MX2 class as a breeding ground for talent to enter the MXGP division. The 23 year age ceiling, established in 2010, was also part of this sculpting of the category. The rulebook was tweaked in response to Jeffrey Herlings’ success and the prospect of a late teenager being forced onto the bigger motorcycle five years ago. It was subsequently reinstated to ensure that Herlings did not overstay his welcome and extend his dominance on the 250.

Pauls Jonass, the 2017 world champion who is still legible for MX2 competition, was in the same situation last summer while tussling with Prado for the crown. Prado, who could not complete Grands Prix in Italy and Portugal in his debut season in 2017 due to exhaustion, would be two years younger than the Latvian however and could face the scenario of 2020 pre-season races on a 450SX-F before his 19th birthday.

KTM VP of offroad Robert Jonas stated on the company’s official Blog that he believes Prado is more than capable of handling the MXGP contest and the bigger motorcycle. The sentiment has been echoed by the Austrian’s boss: Pit Beirer. “Jorge is an outstanding rider,” the German says. “You get great riders on the gate but then you get special ones and he is one of them. We can name him as part of the same Herlings-Roczen story where they hit a high level so young. Jorge is on the same path.”

Beirer seemed to hint that the FIM could be forced to examine the regulations once more to prevent Prado from being forced into a racing a series that he might not feel ready for. If there is no adjustment then Red Bull KTM could be looking at the startling line-up of Tony Cairoli, Jeffrey Herlings and Prado on the MXGP gate for the 2020 season. “I don’t think the rule is ‘done’ but I think this boy can handle it because he moves the bike with a lot of style and power through his technique,” he says. ‘If the boy would need a 450 bike then he will get one from KTM; I promise you.”