Kras and Dunn on Matterley Basin! 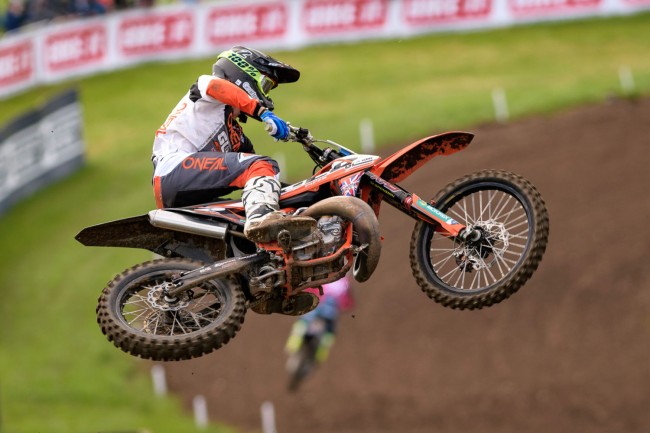 The highs and lows of motocross racing couldn’t be better illustrated than the contrasting fortunes of GL12 Racing KTM’s Mike Kras and James Dunn at the weekend’s MXGP of Great Britain at Matterley Basin.

Mike, who had an eight-point lead in the EMX300 championship after the first three rounds, suffered two mechanical DNFs while fighting for the lead.
As a result he’s dropped to fourth in the standings, 39 points behind defending champion Brad Anderson with three rounds to go.
Competing in the EMX250 class on the sole two-stroke in the field, James ran 8-9 for a solid 10th overall and ended the weekend just seven points away from a podium finish.

Bob Buchanan – Team Principal
“Mike was strong and rode hard and we let him down.
“He could easily have come away from there with a 1-1, however our bike failed him. It is hard for us all to take, especially when we put everything we had into going to Russia to save losing 50 points only to give them away an hour from home.
“James had two solid top-10 finishes and was in touch with the leaders, demonstrating again the relevance of the two-stroke against the four-stroke in that class. He was good to watch and I’m sure we will see him running at the front soon.”

Mike Kras – DNS (DNF-DNF)
“I’d been looking forward to racing at Matterley for the last four weeks but it ended in a nightmare. After taking pole position I was racing for the win in both motos but didn’t make it to the finish line.
“It’s part of this sport but not the good part but we will keep working and show everyone what we can do.”

James Dunn – 8th (6-13)
“I always look forward to the British GP every year and for sure this year did not disappoint.
“The track was amazing – one of the best I’ve ridden in a long time – and qualifying on Saturday morning went well which gave me a decent gate-pick so I could line up on the inside for the main races.
“I had a bad jump in moto one put pushed hard around the first turn and for the opening lap which put me into the top 10. A small crash at half-distance dropped me back to 11th but I felt strong at the end and pulled back through to eighth.
“My start in race two was better – although it still needs working on – and I rode a solid moto to finish ninth for 10th overall.
“It was a super-fun weekend and I can’t thank Bob and Ade enough for making it all possible.”