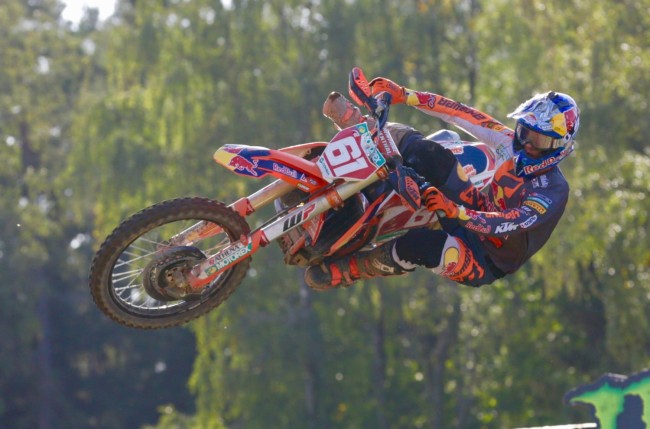 “Think about the gate, nothing else matters.”

The words Jeremy McGrath’s long-time mechanic Skip Norfolk says he told the king of supercross on the line before the gate dropped in order to ensure McGrath maximised his starting potential.

They both knew that with a total focus on executing that one key technique would ultimately build the platform for the best opportunity to win the race. It was a philosophy and execution that gave McGrath more supercross titles (7) and race wins (72) than anyone else in history.

McGrath was the complete package in supercross. A great starter, amazing technique and a calm head under pressure. His basic philosophy on a supercross track was to get the start sprint early to get a lead and then cruise the last few lap controlling the gap – remind you of anyone?

He is a great starter, he has amazing technique on track and is always calm under pressure. Plus, one of his greatest strengths is his early sprint lap speed to pull away from the majority of the pack before they get a chance to get into their rhythm – even if they get away with him.

Like McGrath, Prado is a unique talent who can consistently execute a race better than his rivals. Back in the 90s a guy like Mike Larocco would often have the speed in supercross but not the starts, he was always coming through the field but regularly ran out of time to catch McGrath or he didn’t have the sprint laps when he did get a good start. And while he could beat Jeremy at times, the chances of him doing so were greatly reduced due to poor starts.

A rider like Jago Geerts was in a similar position this season, he has the speed of Prado at times but Prado puts himself in position to win races week after week with less risk than his rivals, riding perhaps a percentage or two off his maximum risk thanks to his superb technique but is still able to run the pace of his rivals or faster. It’s exactly like how Jeremy McGrath did it in supercross.

At 18 Prado has a racing maturity beyond his years, he isn’t intimated and believes in himself. Ricky Carmichael ultimately beat an ageing McGrath with intensity poured onto the speed, and that’s something Jeffrey Herlings, the Carmichael of the current era, perhaps has the edge on Prado too as the Spaniard moves up to the big bike class next year. But Herlings has to stay healthy and get the starts to put himself in position to push the Spaniard who will no doubt get the starts again in the premier class in 2020.

Jeremy McGrath was the dominant rider when he won two 250, supercross titles, he then took it to another level when he moved to the premier class, but can Prado do the same against some of the greatest and toughest world champions of the sport in Cairoli, Herlings and Gajser?