Jorge Prado: The next motocross superstar 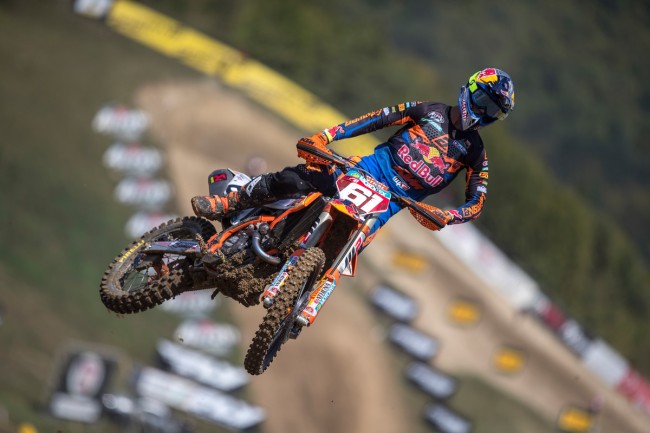 After winning the MX2 world title and the MX2 class at Red Bud that saw him beat both US National champions and lead the MXGP world champ for nearly 20 minutes in moto one, it somehow feels like Jorge Prado hasn’t quite got the adulation he deserves.

If this was a 17 year-old American sensation the media would be all over it but being Spanish, a country that isn’t big on motocross, and winning MX2 not the 250 Nationals seems to have hurt Prado outside the MXGP aficionados. But make no mistake about it, this kid is sensational.

Prado showed why he was world champ at Red Bud. Pic: Doug Turney

Prado is on track to be the next big star after Cairoli, Roczen and Herlings of MXGP, and his poise and intelligence on track highlight the reason why he coped with his first successful world title challenge this year.

After a a stellar youth career, that saw him picked up by factory KTM on 85s at just 13, Prado served notice of his potential in the pro ranks when he went bar-to-bar with Jeffrey Herlings at Assen two years ago at just 15 years old. Herlings wasn’t happy with Prado but the Spaniard showed there and then that he wouldn’t be intimidated by anyone.

Two years later, after smartly joining the Italian based De Carli factory Red Bull KTM team and working with Cairoli, the additional strength he gained, the GP experience and improving his weaknesses in heat, hard pack and mud, Prado became the complete rider. After moving from Spain to Belgium with his family to achieve his world championship dream, the dedicated Spaniard’s move to Italy over the winter, clearly paid off.

With his flawless technique on the bike, there now appears to be very little weakness, and he is, big injuries withstanding, only going to get faster and stronger. Like Roczen and Cairoli before him, Prado stays light on the bike and carries his speed, making smart decisions on lines and when and when not to take risks. Prado doesn’t risk his health to win every battle and focuses on the war, he is content to take a third or even a top five on a day he isn’t feeling great but always wins when he can.

He is different to Herlings’ aggressive mentality but no less effective. He again showed no intimidation against Herlings, fighting him as best he could at Red Bud despite being 200cc less, and Herlings will know that after Cairoli, Prado will be the next De Carli Red Bull KTM rider trying to take his number one plate.

Aaron Plessinger gave it all the big talk before the Des Nations. But Prado saw what he said, kept quiet and did his talking on track and humbled the American who simply wasn’t close to the level of the world champ on Sunday. With Prado saying to the US media after that mud wasn’t his best conditions.

Prado told us, “I came to this weekend and I didn’t even say a word because I didn’t know what to expect. I couldn’t say I would beat them, I was expecting them to go faster. I was coming here thinking I will try to learn from those guys because I thought they would be faster but they were slower. It’s cool to see the Europeans we have a good level and that’s pretty important for the future.”

The question now is where does Prado go from here, the overwhelming favourite, according to UK’s online betting sites to defend his title next season, Prado would be forced up to the MXGP class if he wins at 19, but would the diminutive Spaniard be ready for a big bike then or will he be forced to the USA to chase his supercross dream until he feels is ready to challenge Herlings in the premier class in motocross?

Prado has some big decisions to make in a year or two, but whether he goes MXGP, goes to the USA or does both during his career, Jorge Prado is your best bet for the next global superstar of this great sport!