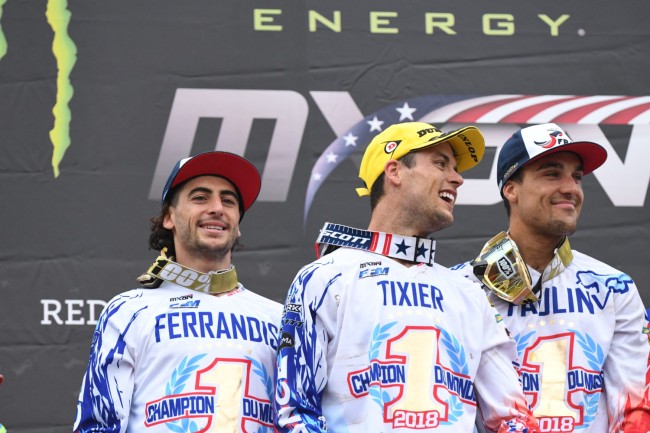 Jordi Tixier was the big question mark coming into the MX of Nations after a tough injury-riddled GP season,  but the 2014 MX2 world champ showed he could get the job done with two good motos- even if his bike quit on him in the first moto while he ran 12th!

It meant big pressure for Tixier in the final moto, who was forced to run a standard moto borrowed for Mexico, and they only just go the engine switched in time as the bike came flying past us in the paddock just in time for the crucial third moto!

But Tixier did what he had to do and followed behind Barcia, Van Horebeek and Searle to ensure France got the points they needed to secure a remarkable fifth Nations win on the bounce!

A brilliant day for you all, especially you after such a tough season, then the misfortune of a mechanical in the first moto, but you stayed strong to get a crucial 15th place in that high pressure final moto. How much do you feel vindicated as the choice to replace Febvre?

Yeah it was big pressure. They called and said they wanted to take me for the race after the injury and some difficult moments for the team. I signed with a good team for next year, VHR KTM, and we decided to work together for this race. In two weeks we had to make a good engine, good suspension and put everything in a crate for the USA!

It was good but in that first moto when I was 12th or something the bike broke, so it’s been a tough time but we kept the head up and the motivation for the third moto and it worked. Dylan did a great job, Gautier and awesome job and I just did what I had to do and it worked and we won for the fifth time in a row and sixth time overall, it’s something special, lets enjoy it, it’s a really special moment. A special thanks to the French team, my tea, my parents, girlfriend, brother all the fans around here who believed in me.

You were going good in that last moto despite the pressure, you weren’t far behind Barcia, but were you nervous about the bike or were you just concentrating on your riding?

You know the start was quite good with a full stock bike. I managed to come back to 14th, I was faster than Barcia, Van Horebeek and Searle in front but I didn’t want to upset the bike, so I just kept my lines and not make any mistakes and J just needed to finish in my place, so that’s what I did, I could have done better but I just did what I needed too for the team.

I think a lot of people expected you to have a very good 450 career with your style, but injuries have kind of wrecked that so far. Are you looking forward to next season now and getting a full winter and showing what you can do?

Actually when I won the title on the 250 everybody said, I was going to be fast on the 450, and actually in the winter I have had good speed, enough to run top five but some little injuries have wrecked me for the last three years. I think it will work because I have found again how I want to feel in the team and just having fun, it worked for this weekend so let’s enjoy it and work for next season.