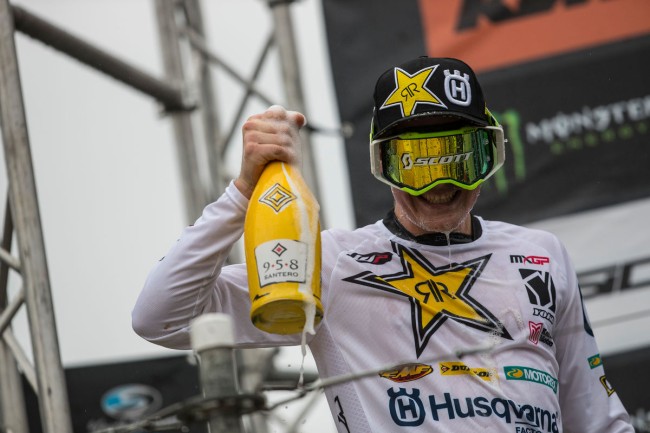 Battling against challenging, muddy and changeable track conditions in both motos at the fifth stop of the FIM Motocross World Championship, Rockstar Energy Husqvarna Factory Racing’s Pauls Jonass has claimed his first MXGP class podium with a well-deserved second place overall result. Runner-up in the opening moto before placing third in the day’s final race, Jonass delivered one of two podium results for Rockstar Energy Husqvarna at Mantova as Thomas Kjer Olsen secured second in the MX2 class to maintain his world championship lead.

Dry during Saturday’s qualifying races, race day at the GP of Lombardia was an altogether different story. Heavy overnight rain ensured unpredictable track conditions at the start of the Grand Prix with continued rainfall throughout the day further challenging all MXGP and MX2 racers.

Working hard during the weeks leading up to the GP of Lombardia, Pauls Jonass claimed two strong starts and made light work of the heavily rutted Mantova circuit. Keeping mistakes to a minimum during the opening race, Jonass held fourth during the opening seven laps before moving into third and then, five laps later, into the runner-up spot. Holding position for the final three laps of the moto he secured his best result of the year to date.

Again fourth early in the race, Jonass quickly moved into third in the second moto before going on to complete 14 of the 15 laps just a handful of bike lengths behind the second placed rider. Almost stepping off his FC 450 during the closing stages of the race while trying to make a pass for second, Jonass decided to settle for third. Crossing the finish line in third, he secured a career first MXGP podium with second overall.

The GP of Lombardia was a mixed one for Jonass’ team-mate Arminas Jasikonis. A double-digit points scorer at each of the four previous GPs, Jasikonis delivered an impressive and controlled opening moto performance to claim a strong third, close behind second-placed Jonass. Frustratingly, things didn’t go as planned in the second moto. Colliding with another rider halfway down the start straight, the tall FC 450 rider had to shut-off momentarily, which saw him immediately drop to the back of the pack heading into the first corner. Falling later in the opening lap, Jasikonis would eventually place 15th for eighth overall.

In MX2 Thomas Kjer Olsen completed a successful GP, maintaining his position as red plate championship leader despite a challenging opening moto. Running into trouble at the start of the first MX2 race, Kjer Olsen rounded the first full lap down in 17th place – a hugely disadvantaged position due to the muddy conditions. Not rushing things, he steadily worked his way forward to hold eighth mid-race. Pushing forward a further two positions, TKO secured a deserved sixth place result.

Pleased with his speed during the first race, the second moto saw TKO avoid first corner trouble, circulating in a strong fourth at the end of lap one. Quickly up to third, which he held until lap seven, he moved into the runner-up position on lap eight. Managing the difficult track conditions well he held on to the runner-up result and with it claimed enough points to finish second overall.

The GP of Lombardia was bittersweet for Jed Beaton. Securing his best moto finish of the season to date with a confidence-boosting third in the opening moto, Jed then sat comfortably inside the top 10 for much of the second MX2 race. Holding sixth from lap two to lap 11 a crash while landing from a jump knocked the wind out of his sails and damaged his bike. Finishing the race in an eventual 17th, Jed placed seventh overall for the day.

The Rockstar Energy Husqvarna Factory Racing team now head to round six of the FIM Motocross World Championship, the MXGP of Portugal, on May 19.

Pauls Jonass:“This weekend has been really great. I think the qualification race, even if I didn’t get the result I hoped for, was really important for me. Getting a good start and running close to the front really gave me a lot of confidence, which I took into today’s racing. Of course, the track was muddy, but I like the mud, so I felt good. I didn’t get perfect starts, but I managed to make some quick passes and avoid making any big mistakes. Getting the runner-up result in the first moto felt so, so good. The track was a little more one-lined in the second moto but again I felt good. I felt like I was a little quicker than Bogers but I got sideways a few times trying to pass him, so I decided not to take any more chances and just settle down. Getting a good overall result is much more important. To finish second overall, to get my first MXGP podium, to be stood on the box with Cairoli, it’s a very special moment for me. I feel like something has clicked in a positive way now with racing a 450. I’m not at 100% yet but I’m feeling a lot more confident and this result gives me a lot of motivation to keep working hard.”

Arminas Jasikonis:“This has definitely been a special GP, but it’s not gone like I hoped it would with my result in the second moto. I had one positive race and one where I just focused on survival, if I’m honest. The first race went well, but I was a little too steady possibly. I had a good rhythm going and didn’t make any bad mistakes – it was good to get two Rockstar Energy Husqvarnas inside the top three. Race two was tough. I had to shut off down the start straight and from there things were difficult. I also fell and, well, it was a tough moto. I finished the race, I didn’t pick up any injuries and I’m still fourth in the championship, so things weren’t too bad. My speed in the opening race was good, so I’ll take that into the next GP, in Portugal.”

Thomas Kjer-Olsen:“That was a tough GP, especially the first moto. Considering I got caught up in the first corner, as well as needing to make a goggle change, I’m pleased that I was able to work my way back to sixth. It’s never ideal to have so much work to do in a race, but I kept my cool and worked my way forward. I’m pleased with the way I rode. The track was tough, but I kind of enjoyed it. It was tricky in places but not too difficult, having some sand in the terrain meant it wasn’t full-on mud. I felt good in the second moto. A good start helped me a lot. I moved forward a few places and ran second for most of the moto, which I’m pleased with. It’s been a positive weekend and I’m looking forward to Portugal now.”