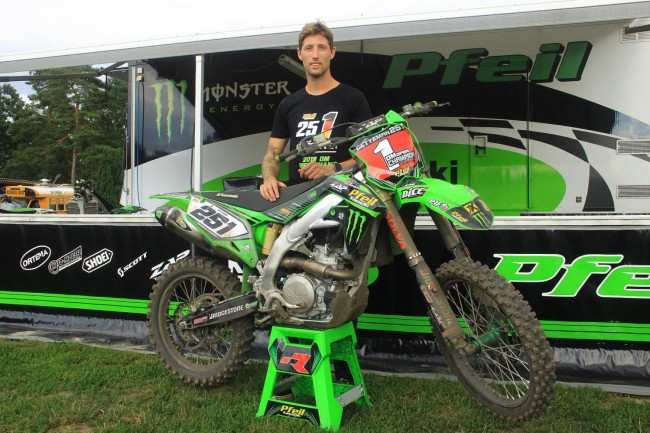 Mission completed. Jens Getteman has successfully defended his title in the Open category of the German Motocross Championship. The 25-year-old finished the job last Sunday at the final round in Jüterbog with a moto win. It´s his third title in two years and also his third riding for Monster Energy Kawasaki Elf Team Pfeil.

Getteman arrived at the series finale 41 points ahead of second place. A crash in the first moto made things a little more thrilling than anticipated, but the nervousness soon made way for team celebrations, as “JG251” crushed his opponents in the second race with a dominating performance. Ultimately, the old and new champion won six of the eight series rounds aboard his KX450F, claiming 11 moto wins in total.

“Any other outcome would have been hard to accept,” stated team owner Harald Pfeil. “We showed early in the season that we have the fastest rider and the best package. Jens was a little nervous before the first moto. The crash could have ended far worse. He made amends with the attitude of a true champion in the second moto, and in the end it was a highly convincing statement. Now our concentration shifts to the closing rounds of the ADAC MX Masters series, where Jens is also leading.”