James Stewart on Eli Tomac – the guy that everybody fears 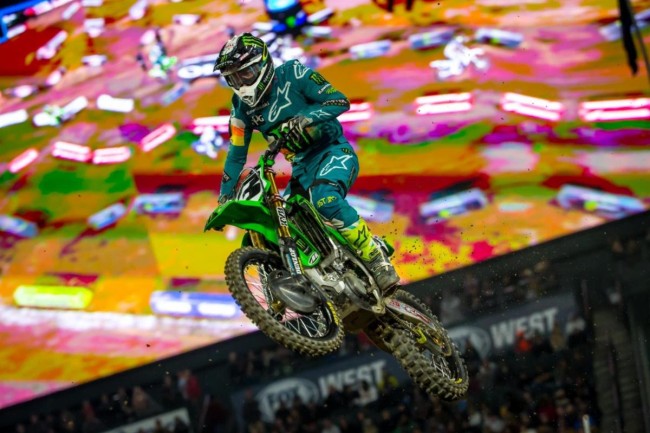 James Stewart had some very interesting things to say on Eli Tomac after the Kawasaki rider won his first main event of the year at A2. Stewart is analysing each race for Feld  and is doing a brilliant job providing his expert insight and providing a glimpse into the mindset of the racer.

“He was on another level,” said Stewart of Tomac at A2 but confessed bewilderment at Eli’s inconsistency. “That’s what’s crazy about this guy, it’s unbelievable how fast he goes and unbelievable how different he rides between week to week. I would go to the mirror if I was Eli Tomac and start singing, “you can’t touch this,” seriously! Because they couldn’t touch this (at A2) if I had that speed, and sometimes I did, I wouldn’t even be that worried.

“With Eli the one thing he has that other guys fear is speed. This guy is the guy that everybody fears and if he brings this (A2 speed) every weekend it’s over, I tell you right now it’s over. I felt like he couldn’t just ride around in fourth place and just be solid and win the championship, I felt that those guys wouldn’t fear that Tomac. they fear this guy, I don’t know who else in the world wouldn’t fear him. When he got up front he was going two seconds faster, which is insane on a supercross track, I don’t think you guys understand how fast that really is. He got out front and pulled away about four or five seconds and just kind of cruised which is different than Eli in the past. If he can have that speed where he is a second/second and half faster than those guys and then manage the lead, that is dangerous. This track was really open in the sense there wasn’t no stop and go, when the tracks are like that Eli is pretty dominant.

“I don’t think there is a person riding in the world right now that when he is on could beat him. You think about all the greats that’s came through the sport, myself, Ricky Carmichael, Jeremy McGrath, we would all have hard time beating that guy still. The guy is good. We all had different things that maybe we did better or he does better than us, but pure speed he is one of the top three of the fastest guys I have ever seen. I would have to be on my game if he was on his game, it would be a great race! Luckily I’m sitting right here so I ain’t got to worry about it, I’ll just say I can beat him – he can’t prove it!”