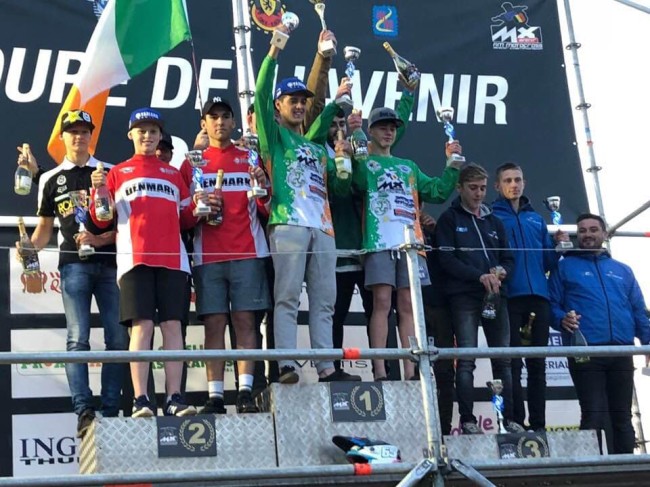 Ireland have sensationally won the under 21 (open) class at the Coupe de l’Avenir in Belgium. James Mackrel (MX1), Jake Sheridan (MX2) and Jack Galvin (125cc) were the three riders that led Ireland to victory.

Competing against plenty of EMX250 and EMX125 talent, it’s a huge achievement for Ireland to win the overall in the open class.

James Mackrel was the star man as he got the weekend of to a superb start finishing third in the first moto, he was only sixteen seconds behind Mikkel Haarup which shows just how fast he was riding. Mackrel backed that up by going 5-9 in the remaining moto’s to secure fourth overall in the class.

Sheridan put in three consistent riders to finish 7-8-8 in the three moto’s which meant he was fifth overall just behind Mackrel. Both showed they can run with EMX talent if given the opportunity.

As for Jack Galvin, he possibly had the hardest job on the team as he was on the 125cc but he ended up 29-29-25. There’s no doubt that he’d have learnt a lot taking part in the event and it’ll help his development as a rider.

In terms of the overall results when the 65cc and 85cc results also get counted, it was Latvia who came out on top.