Interview: Tom Grimshaw – stepping up to the MX2 World Championship 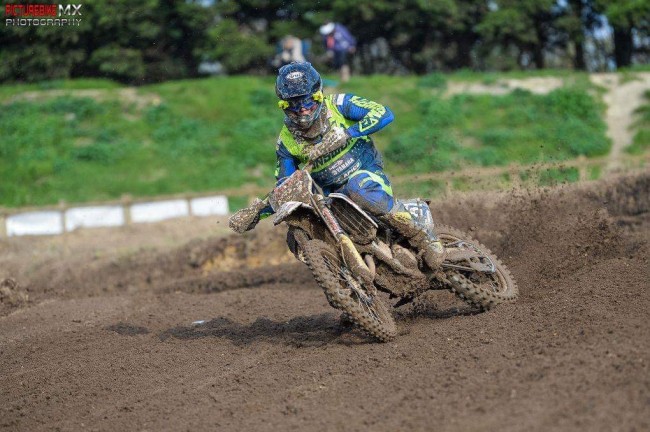 The 2020 is set to be a massive year for young Brit, Tom Grimshaw after it was announced he’s inked a deal with the Chambers Husqvarna team to contest the European rounds of the MX2 World Championship.

It’s a massive opportunity but Grimshaw will learn lots from the best 250cc riders in the world.

We caught up with Grimshaw to discuss 2020 and much more.

Gatedrop: It’s been official for a while now but you’ve signed with Chambers Husqvarna for 2020. How did the deal come around?

Tom Grimshaw: Towards the end of the season me and my dad were looking around for possible deals and we both really felt we needed to be on a Husqvarna or a KTM as we were struggling in some areas with the Yamaha. Tim Chambers heard we were looking around and boom! Tim hit us with a mega deal to do the MX2 GP’s and the British championship on a Chambers Husqvarna which me and my dad were over the moon with.

Gatedrop: You’ll contest the European rounds of the MX2 World Championship, this must be a dream come true and did you expect to get a ride like this for 2020?

Tom Grimshaw: Yes, I will be competing in the European MX2 rounds at the world championships, this is what I have been training and working hard for all my racing career so for it to come this quickly, I was a little shocked but I grabbed the opportunity with both hands. Not many riders get an opportunity like this so I will give it my very best to get some good results but most of all create some awesome memories.

Gatedrop: You improved a lot this year, looking back how would you reflect on your season?

Tom Grimshaw: We started very slow. I am still trying to get over breaking my humorous in 2018, also catching up on the bike time lost I really did struggle. I had to kick myself into gear and I upped the intensity of my riding and training, slowly every week we were getting better, I kept improving as the season went on and started to get some real solid results, but also I was having fun riding which really did help, myself and my family were very happy with my results and we are hoping to build of this season going into 2020.

Gatedrop: You’ve spent a number of years on Yamaha machinery but how are you finding the Husqvarna and what where your first impressions when you first did a few laps on the bike?

Tom Grimshaw: I really loved my Yamaha however we were just struggling in some areas, when I jumped on the husky I came in after 1 lap and my first word was “FAST!” I really like the new bike and we are currently just getting it set up with Mitch from Technical Solutions to my liking, no lap times at the moment just doing laps, laps and more laps to get used to it.

Gatedrop: You had the opportunity to do some MX2 World Championship rounds with JK Yamaha this year, how was it being part of that team and racing the MX2 World series?

Tom Grimshaw: With the JK Yamaha ride it honestly was a blur, everything happened so quickly, one minute I was searching around for parts to fix my bike that I broke out in Belgium 2 days before the EMX250 at Lommel to being under a full GP team awning, my own mechanic, Semi-factory bike and an awesome team all there to help me in my first ever MX2 race.

I really can not thank the team and my friend Claudio for giving me that opportunity. I competed in the Belgium and Italian GP for them and it really did help with my riding, my speed and intensity went up immediately however I was just not in the right shape to hold that pace for a 35 min moto which is understandable with just a few days to prepare. However, going through that I know what to do for next year.

Gatedrop: In terms of the British Championship, what are your goals for 2020?

Tom Grimshaw: In the British Championship I got some real good results this year, for 2020 I will be aiming for solid top 10’s and push as much as I can for that top 7, however it’s going to be tough and especially with everyone returning from injury as our class was hit hard with injuries this year. The tracks have just been announced and there are a few in there I really like so very excited to get things kicked off.

Gatedrop: Also in the MX2 World Championship, is the goal just to learn from the best riders in the world and improve as a rider as oppose to setting any specific goals?

Tom Grimshaw: Exactly that! For the world championships it’s all about the word “LEARN” –  learning the new speed, the higher intensity, the track’s, the format, etc. This is everyone’s dream and especially my dream so I am going to live it and rip it! The goals are to walk away from the each weekend with a smile on face knowing I gave that 100% and what I need to do to get better for the next one.

Gatedrop: I’m sure some people think the EMX250 class would be a better fit for you, what’s the reason for doing MX2 instead?

Tom Grimshaw: The plan was EMX250 again for this year however, no one was going to turn down an MX2 ride, you get more track time, more coverage and less stress as you know all you have to do is focus on the races.

With the EMX250 you spend all week stressing how your weekend could be over by 11am if you don’t qualify, so with MX2 all I need to do is focus on myself and what I need to do to try and get the best possible position in the races. Also, to be honest the pace is not much different, just with MX2 it’s your fastest possible lap every lap for 35 mins.

Gatedrop: In terms of winter prep, where will you be putting in the laps and do you know what pre season races you’ll contest?

Tom Grimshaw: I will be spending most of the winter just doing laps so that I can get adjusted to the Husky, I will be over in Belgium a lot with my teammates getting some sand riding in and also hopefully a cheeky trip to Spain to just get a little break from the cold and the wet tracks where I can put my long motos in.

Hawkstone International will be my first race of the 2020 season along with some Dutch Internationals, then shortly after that we have Matterley Basin which kicks things off.

Gatedrop: Looking at the MXGP calendar for 2020, what tracks are you looking forward to the most and why?

Tom Grimshaw: The 2020 calendar looks great however I am obviously looking forward to the British GP along with the French GP, but my face lit up when I saw Maggoria in Italy was back on the calendar, I love the old school tracks and can not wait to go there.

Tom Grimshaw: I really want to thank all my sponsors for giving me the support they do making things like this possible. Big thanks to Tim for giving us this opportunity and also my family who have always got my back.