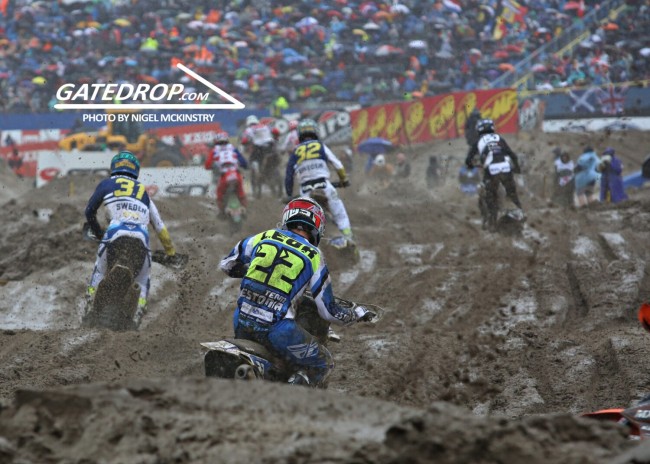 Tanel Leok contested the Motocross Des Nations at Assen which was his nineteenth time contesting the event – that’s one heck of an achievement.

Leok might not be getting any younger but he’s still motivated to do the best job he can out on track. The Estonian picked up a knee injury before the Swedish GP and could have easily just ended the season but he wanted that top fifteen in the MXGP World Championship and to contest the MXoN for Estonia.

Next year if Leok can head to France for the event it’ll be his twentieth time contested the event which will be very special.

We caught up with Leok after Assen to discuss the race, his A1M Husqvarna team and much more.

Gatedrop: Tanel, the Motocross Des Nations is a special event and you hold the record for contesting it the most. Is this a special race for you or because you’ve contested it so much does it just feel like any other race?

Tanel Leok: It’s a team effort and it brings the country together. For sure there’s a lot of people looking at this event and it brings the nations together. People really get into it so that makes it a bit special. Somehow, I’ve managed to do 19 straight years and 19 times in the final. Many times, close to the podium even like today.

Gatedrop: Nations wise it was fantastic for Estonia finishing fourth overall but individually were you happy with how things went?

Tanel Leok: No, I didn’t say before the race but I’ve a big problem. On the 9th of October (today) I’ve an operation, I’ve a broken ACL and broken outside ligament. The cartridge is damaged so I need to fix, I will have quite a big operation on the 9th. I am happy that I was able to finish top fifteen in the World Championship, the injury happened before the Swedish GP. I’ve been riding okay but I’ve not been like myself and that makes me a little bit bummed and not happy. It’s a great result for Estonia but I feel like if I was on my A game that the podium would have been quite close.

Gatedrop: Just on the injury, how much is it affecting you out there, would you be 80% fit and are you in any pain?

Tanel Leok: I actually hate that it was raining like this because with the long ruts and stepping my foot on the ground many times, it was actually quite painful. It sticks in my head a little bit, especially left hand corners, I was being careful not to touch the ground. I don’t know percentage wise how I could put this but I’m not riding like myself.

It hasn’t been fun for me the last couple of months now, but I wanted to do this (MXoN). I wanted to bring team Estonia a good result and in the end we were fourth, it’s not bad. In the end everybody had bad luck, it’s motocross so I can’t really complain. I had my goal to be top 15 in the world championship and I managed that, that’s why I didn’t have the operation earlier. Then I said, let’s do the Motocross Des Nations. It’s been coming better for me already in Turkey and Indonesia, it was going better. Before this event they took liquid out of my knee I think 7 times. It was a little bit messy.

Gatedrop: I can tell you’re a little bit frustrated that Estonia finished fourth and missed that podium but on the other hand, Estonia is a small country and to beat some top nations, it’s a great achievement!

Tanel Leok: For sure, I am pleased. I mean team Estonia, this is now the third time we’ve finished fourth place and many times in the top ten. For a small nation, it’s huge. Every time I get frustrated a little bit because everyone counts Estonia out before the race but in the end, we are there all the time.

Gatedrop: Just on the A1M Husqvarna team, running your own team and racing MXGP at the same time. It must be pretty tricky; how do you find it all and where do you find the motivation from?

Tanel Leok: Next year will be my twentieth year in GP’s and if I do good results I’ll get to represent Estonia at the Motocross Des Nations again. Hopefully I am fit and healthy, that’s my next focus. I am running my own team, it is tricky but it’s good (laughs). We manage it and we have fun, that’s what it’s all about and I enjoy riding. Now the pressure is off because I don’t have to win or be on the podium. I’ve had factory bikes but now I’m testing and developing the bikes. I give my best and I don’t need to prove anything to anybody. I do it because of why I started motocross in the first place, I was a small kid and didn’t dream about winning anything. I was just dreaming about riding and now I’m riding and having the same dream as I was a small kid.

Tanel Leok: I mean I would like to have the team, it would be nice to have it. First of all I need to really find a promising rider who can get the support, which the team needs. It’s still a little bit difficult for me to find this kind of person. Roland Edelbacher is confirmed, myself and Edelbacher will be with the team next year. For sure, I want to give a chance to a young Estonian kid but I can’t just rely on an Estonian rider. I need to continue and give a chance to a great rider if I can find them. We will see.

Gatedrop: I thought Talviku had a good season, how would you rate his season?

Tanel Leok: I was impressed also. But you have to notice, he was a little bit older than the rest of the field. Guadagnini and Guyon were older but I mean they were right at the top and dominated. They were the top two and no one else could really touch them. The rest of the field, Kay de Wolf, Simon Längenfelder and Liam Everts, they were 14 at the start of the season so that’s quite young. But anyway, I am happy with Talviku’s season, it’s good that Estonia has something to build on. Hopefully he can improve because for us and for him also, he’s not been so much in Europe riding like the others. He learnt the tracks and things like that, maybe he can be on a better level again.

Gatedrop: How many years do you think is left in you yet before you hang up the boots?

Tanel Leok: I don’t know. I take it year by year right now and I’ve got good opportunities and contacts for the future so why not? I enjoy it, I just need to be myself and be fit. If I can be focused and enjoy it, I will still keep going.