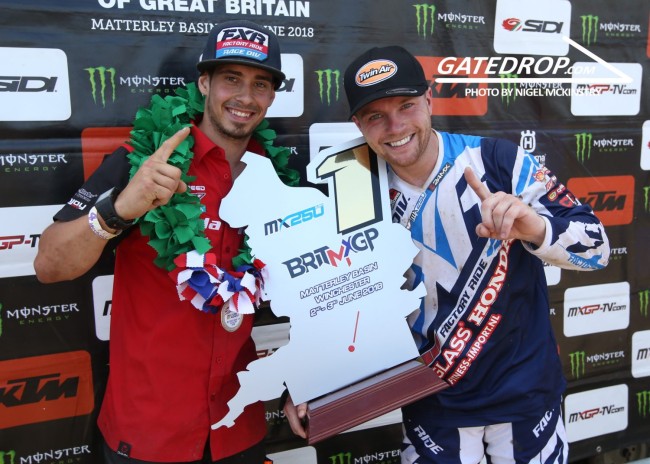 Matterley Basin hosted the fifth round of the EMX250 Championship and there was always a decent chance of seeing a Brit stand on the top step of the podium with the likes of Martin Barr, Mel Pocock and Steven Clarke just a few of the Brits who’ve been competitive in the series coming into Matterley Basin.

It was Steven Clarke who had a superb weekend on his Carglass Honda. In the first moto with less than half a lap to go, it looked like he’d have to settle for second but the determined Brit made the move to take the first moto win.

Clarke was leading the second moto and looking good before the very talented Mikkel Haarup found his way past, it meant Clarke had to settle for second but he still won the overall on the day and climbs up to fourth in the championship standings.

We caught up with Clarke after his win at the weekend.

Gatedrop: Steven, superb weekend for you here in Matterley Basin, you must be over the moon to stand on the box of the box in front of your home crowd?

Steven Clarke: Yeah, it was sick. I love this place and I was keen for a win when I was on the way here. I came here, did the work and did the business. I’m happy, I wanted a double moto victory but Haarup was just on another mission at the end of that race. He caught me off guard and once he passed me I just thought second was good enough for the overall and that’s what I was going for.

I clawed back a lot of points in the championship so I’m up to fourth now which is ideal. We have plenty of races left, I’m just happy to go out there get the win and put on a good show for the English crowd.

Gatedrop: In the first moto you were behind Tom Vialle with less than half a lap to go. I saw the pass and it didn’t look like there was any room for you to get it done! Can you talk me through the pass?

Steven Clarke: Yeah, basically there’s a rut around the sweeper, it’s about six feet into the track and there was a little bit of a gap down the inside. I just thought I’d poke my front wheel in there and see if there was any room. It kind of startled him and he went out of the rut and I just went passed him. He kind of handed it to me really but I don’t think he was expecting me to dive down such a tight gap as well but it was good. Luckily being only ten corners from the finish he didn’t have enough time to come back at me.

Gatedrop: The start of the EMX250 Championship has been a bit up and down for you but with this win behind you now it should give you confidence heading into the rest of the series?

Steven Clarke: I was struggling a little bit at the deep tracks at the beginning of the season in the sand. I’ve got France next week which is Saint Jean d’Angely and its hard pack. Then we’ve got deep sand at Ottobiano but I’m looking for a good race next weekend, to score some more points and have a bit more confidence heading into the sand races.

Gatedrop: Just going back to last year, you were racing in America doing some AMA Nationals as a privateer. How was all that for you and what made you decide to come back and have a go at the EMX250 Championship which you’ve previously won!

Steven Clarke:  To be honest, being a privateer over there cost us a fortune. Any money I saved up the last ten years in racing I spent last year trying to make a name for myself in America. Unfortunately, I didn’t get any deals or offers from anybody, I beat most of their team riders anyway on my own bike but it is what it is.

I had a pretty good deal to come back over here in Europe and race for Carglass Honda. It was a good offer and I couldn’t really say no. I like being at home now I’m a bit older, I’ll be 28 next month and it’s nice to spend time with my family, being at my own house, driving my own car and stuff. It was just a decision I couldn’t say no too but I would love to go back to America as well for next year, we’ll see what happens.

Gatedrop: After seeing you on a KTM or Husqvarna for a number of years it’s taking a while to getting used to seeing you on the Honda. How’s the bike compare to those two bikes and are you enjoying it?

Steven Clarke: Ah mate, I love it. I’ve got my suspension dialled in perfect and it handles like a dream. Now I’ve finally got some speed out of the engine, it’s all coming together and it shows in my results. We are getting stronger and stronger – I’m happy with the Honda.

Gatedrop: You rode the last round of the British Championship, was it nice to race at home again and have you any plans to do anymore? I’d love to see you at Desertmartin!

Steven Clarke:  I would, I would love to come to Desertmartin because you know I love that track, it’s a bit of a man’s track which is what I’m into. It’ll depend on my schedule, I’m unsure at the moment. I can’t commit to anything until the week before, it’s just one of those. I have to get permission to Honda and all this nonsense. I’m pretty sure Foxhill is after my EMX250 championship is over so I’ll be there at that one. If I’m coming to Desertmartin you’ll be the first to know, don’t worry about that.

Gatedrop: You rode the MXGP of Germany, I don’t think that’s the first round of it you’ve done but how did it go for you? As you’re too old for MX2, would you see yourself in that class in the future?

Steven Clarke:  Yeah, definitely. I just wanted to go and see where I was at and dip my feet in. I wasn’t prepared, I got there after only getting my bikes on the Wednesday or Thursday before. I rode one day on a flat track so my suspension wasn’t quite good enough for GP level. I didn’t realise that until I got there but standing on the pegs and cruising around I managed to get twenty-second so I know that on a good bike and some training I could be inside the points. That’s what I wanted to see. It was a good experience and good training. I hadn’t done an MXGP since 2010 so 8 years later I did my next one. It went a lot better than the first one, let’s just leave it at that.