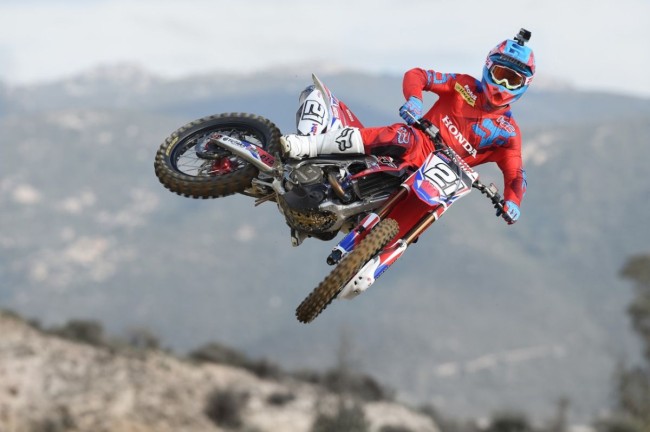 Former GP racer Roger Harvey is the general manager of the mighty HRC Honda MXGP team and has one of the biggest seasons in Honda’s recent history to oversee! New signing Gautier Paulin is many people’s favorite to win the title beyond the obvious Villopoto and Cairoli options in what might just be the most anticipated MXGP season in history.

We caught up with the popular  and amiable Harvey to discuss the up-coming season, the signing of Paulin, his expectations of Ryan Villopoto and the young rising star of Tim Gajser.

Gatedrop: Honda seemed to have stepped  it up again this year with their support and also the signing of Paulin.

Paulin tested the base bike and he was pretty happy with that, he made some small changes. So he did that and then everything goes back to Japan for the winter for development, so HRC work on that throughout the winter, constantly on different things. They made a plan for us to test in Sardinia a couple of weeks ago and Paulin, Bobby, and Gajser were all there.

We went through a schedule of different items we have to test and report back on and the Japanese engineers that came over go back to Japan and work on the data we gave them. We went through the whole program and confirmed everything. They( the Japanese) know what is going on, they know what will work, so it has been very positive.

Gatedrop: Was it difficult to get Paulin to sign for Honda?

Roger Harvey:  To be honest, he was very, very interested. He had other very good offers, not just from Kawasaki from other teams. But he knows the timing is right with HRC involved and he knows that is going to give him his best chance, so that’s why he opted to come across.

Gatedrop: Have you been surprised how quickly adapted to the bike?

Roger Harvey:  He rode a Honda all those year ago, so he still has that passion for a Honda. He got on it and almost immediately said, ‘ that’s my bike.’ He just likes the characteristics of it, if I’m honest because the Honda is quite a small bike I thought he might look a bit Ken De Dycker on it! But he doesn’t at all.

Gatedrop: Bobby has been up and down a bit but is he fit and healthy?

Roger Harvey: He is probably as fit as he has ever been at this point in the season, but the objective with Bobby is to stay away from injury, that’s what he needs to do.  We need to get a full solid year out of him. It’s possible, he has the raw speed and he has the bike dialed how he wants it and is very, very happy with that.  It’s just a matter of putting it together.

Roger Harvey: Yeah, well with his history, people will say he won’t do it. But we know he has the raw speed and we just have to bring that back out of him. He has had some hard times and ridden with injuries. So that’s the plan this year, to keep him free of injuries and let his confidence build and come back into it where he should be – which is a top five guy.

Gatedrop: Regarding JMB, he has come into the team, how did that come about and has it been working well so far?

Roger Harvey:  When we were talking to Gautier, the subject of JMB came up.  I had spoken to JMB last year in Maggiora about the possibility, but he has a lot of promotional work with Honda France on and off road and he is an ambassador for Motul oils so he has a lot going on and it was whether he could dedicated the time to it. So he went away and had a look at it and came back and said he would have the time to do it and to sort out a deal.

Gautier was very interested to have him on because JMB is a thinker, and brought a lot to the team and hopefully that will benefit Gautier and Bobby.

Gatedrop: Will he be at every GP or just the European rounds?

Roger Harvey:  He will be at every GP, he is the team’s sporting manager, he will be looking at the riders’ lines, mentality, physical preparation and what they are doing on the bike.

Gatedrop: Outside of Paulin, that is a very big signing to get Bayle on board for Honda.

Roger Harvey:  Yeah, it is something we haven’t really had in the past. JMB is a good name and he knows how it’s going to happen. It works well, he goes to all the official tests and of course every GP.

Gatedrop: What are your thoughts on Ryan Villopoto and how he will adapt to the World Championship?

Roger Harvey:  Doing what he has done, he is no mug at all! He will be right up there that’s for certain, that’s where is used to racing at, at the sharp end. But I wouldn’t say he is going to win every race, a lot of guys, I certainly know Paulin feels he can run with him.

I think Villopoto could be good at the first round, the second  and third round will be new for everybody. It’s when you come back to tracks like Arco and Loket. Although he knows what he’s getting into, he has been  to most of the tracks we have tested at in Italy, he is doing his homework.

Gatedrop: Your goal is obviously to win the World title with Paulin, is it realistic to expect it from his this season?

Roger Harvey: I don’t think it’s an unrealistic expectation of him or to think he is in with a chance, that’s why we signed him. It’s a long series and Paulin has been known to jump off it so that’s another thing that JMB and everybody is working on with him. So we have to look and see how it develops but absolutely he is a potential winner or that championship – along with a lot of other riders!

Gatedrop: Paulin was coming in as a dark horse to win the championship but if AC or RV don’t win people seem to think he can do it.

Roger Harvey: Yeah, he is riding nice, he has been out of the limelight with it a bit, and rightly so, Villopoto and Cairoli are the two champions, so that has taken the limelight and pressure off him really, so lets see how it turns out.

Gatedrop: Just moving to MX2 and Tim Gajser, it was a pretty shrewd signing to get him last season, he got quicker and quicker and was winning races at the end of the year. How is he looking?

Roger Harvey: He is looking good, the thing that will help him is that we have made a very reasonable step with the bike, so that will help him because is quite a big lad and he is not the lightest jockey out there. But he has done his plans over the winter, training has went good, he has worked hard. He has done what was asked in the pre-season races, we didn’t want him to do what he did last year on several occasions and think, ‘Well I should be beating him,’ And then ending uo jumping off it and hurting himself a bit. He has done that and been steady this pre-season, hopefully he will be ok in Mantova this weekend and he can be a very dark horse for first round in Qatar.

Gatedrop: Talent wise, other that Herlings he might be the most talented guy in the class, what are Honda’s goals for him this year?

Roger Harvey: I want to see him in the top three ideally!

Gatedrop: He doesn’t seem to be intimidated by Herlings and the other more established guys?

Roger Harvey: No, he isn’t intimidated at all! Last year, ok, he wasn’t close to Herlings for a lot the time but if you look at how close he stayed for how long that increased and increased all year. That’s how we measured it all year. And over the winter he has stepped up, he has matured, the kid has grown up over the winter. I think we will see a different Tim Gajser this year.

Gatedrop: Honda’s program seems to be going for the young riders now  like Zaragoza and Gajser and trying to nuture them like KTM have done?

Roger Harvey: Yeah we look for riders with talent, with Zaragoza, we know he has the talent and we know he can jump off it – but they stop that eventually because it hurts too much! Then they mature and stop that, I’ve seen it happen so many times over the years. Zaragoza might be back for Arco but there is no pressure on him, we want him back only when he is fit and healthy, that is the most important thing for Honda.