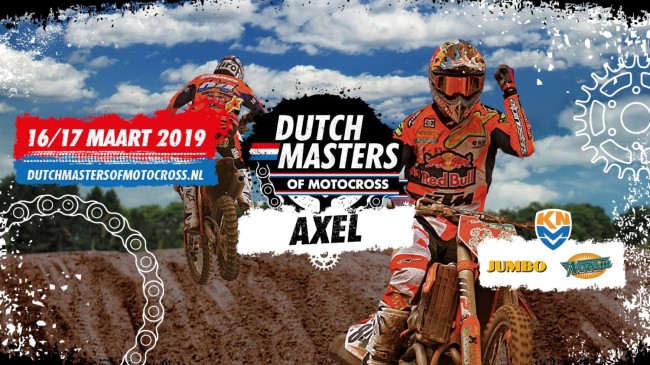 The Dutch Motocross of Masters gets underway on the 16th and 17th of Match at the RES Axel circuit.

Lots of MXGP and EMX riders contest the Dutch Masters as preparation for the season and keep their sand riding on point.

With the first round of the Dutch Masters fast approaching, MXActive caught up with a representative from the RES Axel track to talk about the series and was kind enough to send us the interview.

What do you think of organizing the opening of the Dutch Masters of Motocross as in 2016?

Of course we feel very honoured to be able to organize the opening round again. You can testify to the great confidence that exists in our RES Axel organization. It’s a sign that we have done well running the previous races.

What do you think of the developments of the new Dutch Masters Of Motocross?

The growth that the Dutch Masters has made over the past three years is fantastic! The championship is just there. Even the “big” men and Grand Prix teams like to compete at the Dutch Masters.
Here, the KNMV and the organizing Dutch Masters clubs have also been busy for years to make it a worthy championship. This does mean, however, that the bar is constantly being raised as an organization. Partly due to the sponsorship of both large and small sponsors it has been possible to make a nice prize fund and especially a nice prize fund for the top 5 riders in the final standings. This also makes it so interesting for the drivers to participate.

How did the design of a 2-day event come about?

What has it brought with it in terms of preparation and organization, circular requirements, safety?

A two-day event is actually working twice as hard in terms of organization. The volunteers are now needed for two full days from early in the morning until late at night. You also have to find the people who want to / can work for two days, think of the flaggers, medical service, people in the parking lot, Welcome Office etc. In terms of the rules and safety standards, the normal standards that apply to a Dutch Masters count. Just a matter of everything to go through and plan well in advance.
Newly starting for this year is to start behind 40 gates from the starting grids (the steel plates they also use at the MXGP). This required a bit of renovation of the starting area for us. We started here early, so this was not a problem. We have also been able to cover the Parc Fermé and make a safe crossing in the area by means of a tunnel. Those are things that we have realized before the Dutch Masters, which otherwise might only be realized in a few years.

What changes have been made since the previous Dutch Masters in Axel?

Looking back at the previous ONK’s in Axel. What is most important to you?

Most of all, it stayed with us since 2016. The opening race and also the very first Dutch Masters that was previously called ONK. What a great turnout of riders, many famous names, even more Grand Prix riders than before. It is great to be able to see the audience that has appeared in large numbers.
We have the idea that despite everyone Axel far driving, the people and riders find it worthwhile to travel.

What is the ultimate reason for the public to travel to Axel?

It’s a nice clear circuit where you as a visitor can make the choice to see the whole circuit from a distance, or on the track in the midfield. Of course it will be worthwhile to follow the races again. There will be plenty of good racing in every class.

Which top riders will start at Axel?

What are your ambitions for the next 5 years?

We have grown tremendously over the past 5 to 10 years. Everything is done with volunteers and throughout the year we are open for training sessions two afternoons a week, weather permitting. Then our RES clubcross competition and other competitions will be added. If you have a Dutch Masters in a year, everyone wants to recover afterwards. More than this we can not expect from our volunteers. We have a super group of volunteers. Also an enthusiastic group of flaggers who are present twice a week for the training flags. Nothing is too much, but there are limits to the commitment. Everyone still has his family and work there.

Who would like to thank in advance prior to the event?

Thanks to all volunteers and sponsors. They’re indispensable. Without them RES can’t run a Dutch Masters. Also thanks to the municipality of Terneuzen and the province of Zeeland for the support and cooperation in all respects.

How will the event be a success for the organization in Axel?

It is a success if we can watch beautiful races with a lot of public, everything runs as planned, preferably without disturbances or accidents.
In any case, it will be a great event. We are going to enjoy it.

See also the information HERE for an overview of the calendar 2019, including the latest information about the Dutch Masters.