Interview: Rene Hofer on being an MX2 rookie and a Factory KTM rider 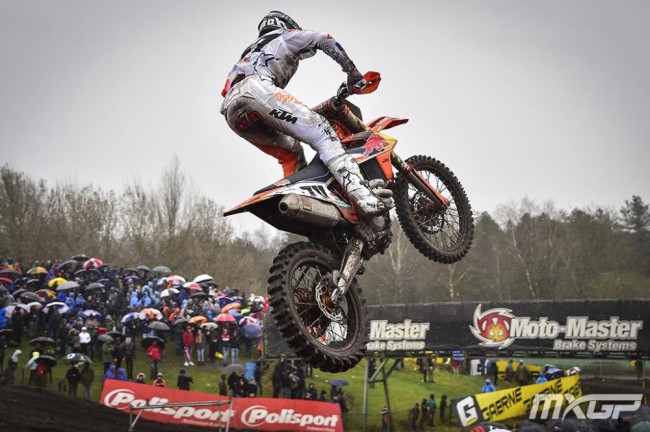 We might only be two rounds into the MX2 World Championship but rookie, Rene Hofer is really impressing already. The Austrian was signed up by the full factory KTM team after Hofer has show cased his talents the past few years whether it be on a 125cc or a 250cc.

Being a factory KTM rider brings a lot of pressure but so far, Hofer is showing no signs of that and is looking really comfortable being an MX2 World Championship rider. As the season goes on and he gains more experience he should only get better. At the first round at Matterley Basin he was only two laps away from a moto win so it’s even possible we will see him win this year.

The fact Hofer even showed good speed at a rough Valkenswaard should only give him confidence, he should be even stronger at the hard pack tracks.

We caught up with Hofer to discuss the level of the MX2 World Championship, being a factory KTM rider and more.

Gatedrop: Rene, you might be a rookie in the MX2 World Championship but pfft you’re a fast rookie! You must be pleased with how the first two GP’s have gone for you?

Hofer: Sure, we didn’t expect it at all. We are more than happy, this weekend was again a good weekend for me. Even though I had the start crash and had some problems with the bike, all in all, it was a good weekend. If we can improve during the year and hope for the same kind of results.

Hofer: (laughs) We just had the goal to be in the top ten consistently. I mean my starts have definitely helped but I think I’m in good shape now. Over the winter together with Tom and Jeffrey, it helped me be in a really good shape now.

Gatedrop: How has it been working with Joel Smets as well?

Hofer: I’m working more with Didi Lacher actually, Joel is more with Tom than he is with me but all in all we help each other and do things together.

Gatedrop: How was in putting in the laps with Jeffrey and Tom over the winter? You must have been able to pick up a lot from them?

Hofer: I think the most important thing is the intensity every day. It was definitely a great help to have them at the pre-season training and riding with them has pushed my speed up for sure.

Gatedrop: One thing I’d say about you in the past is that your starts have been a weak point but this year they’ve been much better. Would you put that down to having the Factory KTM?

Hofer: We have worked a lot on the starts coming into the season and this year. I’ve worked on my start technique and having Tom in the team for sure helps because he is a great starter. Of course the bike is great and I think it makes the last difference. We really worked hard on the starts and I’m more than happy they’ve been going good.

Gatedrop: Even though you had your bike under the Factory KTM awning last year you didn’t have a full factory bike. Is there much of a difference between the bike you have now compared to last years bike?

Hofer: Well the engine is different and the suspension is even more different. Everything feels a little bit stiffer but when you go fast you need that but at the beginning it did feel a little uncomfortable but I got faster and faster. I’ve got used to it and it’s a pretty good setup.

Gatedrop: Seeing Tom Vialle perform the way he did last year as an MX2 rookie and first year as a factory rider. Where you thinking if he can do it then why can’t I?

Hofer: Of course, Tom had an amazing season last year and of course you think you can do the same but I mean Tom’s rookie season was amazing so that’s not the level I would say. I think we are on a good way and if I can keep on going like this it will be perfect.

Gatedrop: You’ve always been a bit better in the hard pack than the sand but this weekend the speed was good in the sand, that must give you some confidence?

Hofer: Yes, we were weeks and months putting in the work in the sand and that definitely helped. Sand riding is a different thing for me especially coming from Austria but now we are going back to hard pack and I am really looking forward to that.

Gatedrop: For the rest of the season what are your expectations now after such a good start to the season?

Hofer: We will go race by race. To be in the top ten consistently then it’s good for us, I’m a rookie, we will take it a little bit easy and then we will see.

Gatedrop: You know seeing how fast you are now, with the rest of this year and a good off season, you might not be far away!

Gatedrop: Being from Austria how is it being a full factory KTM team rider?

Hofer: It is great to have the same nationality as the brand. I live in half in Austria and half the year in the camper in Belgium. It’s a lot of travelling but I have my home back there and I have the Red Bull training facility which means I am in good hands there. Also, for hard pack training it doesn’t matter if you are in Austria or Belgium because there’s not so many hard pack tracks there. Obviously, I enjoy being home and some off time is pretty good for me, we have a really good year planned.

Gatedrop: Just on the level in MX2 compared to EMX250, how would you describe it?

Hofer: The intensity is much higher in MX2. Last year in EMX250 everything was a bit more calm but now especially during the first few laps it’s very intense. Now I have to get used to it and then I think in a few races I’ll be more experienced.