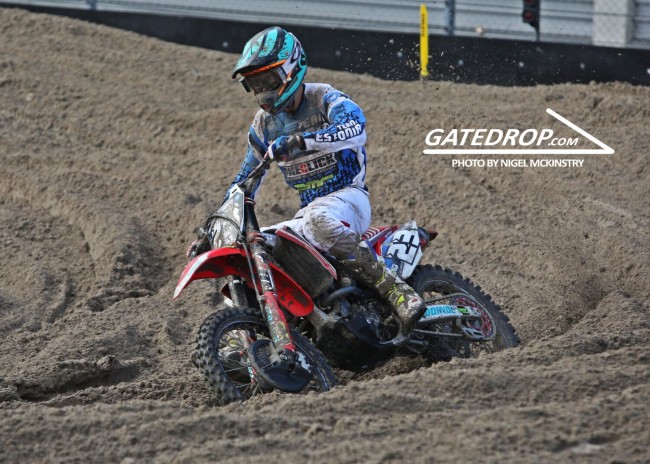 When it comes to the Motocross Des Nations, Estonia are really under rated as they always seem to pull a good result out of the bag. At Assen, Estonia finished fourth overall and just missed out on a podium.

Estonia have been close to the podium a few times but always just miss out. For such a small country, it’s a remarkable achievement for Estonia to do so well at the event.

We caught up with Priit Ratsep after Assen to get his thoughts on the event and more.

Gatedrop: Priit, a few years ago you announced you’d decided to retire from the sport but here you are racing the Motocross Des Nations!

Priit Ratsep: At the beginning of the year, I didn’t see this one coming. For sure, I still keep myself fit, I go running and stuff but I don’t get so much bike time. My season basically started in May in Estonia as I only rode the Estonian championship and Latvian championships.  I did some races in Finland also but I still stayed local. The first pick here I think would have been Hardi Roosiorg but he crashed in Lommel. I was the second choice.

Last year I only rode the 450cc but this year I switched back to the 250cc because without training, it’s way easier to ride. I get so much pleasure from riding it, you know and that’s why I still do it. The first races I did with a 250cc this year and I already knew it was so much fun and I was pushing much more than usual. I still go to work and have my own life this way. Basically I do all the trainings and stuff during my free time. I’m still quite good at it and it shows, we finished fourth today with the team. Harri and Tanel, they made really good results. In the first race I think I had a really good one. In the second race, I didn’t find such a good rhythm but hey the track was so rough out there. Overall, I think it’s been a really good day so I think to finish off the season like this, I would say it’s been one of the best years so far.

Gatedrop:  In the past when you were in the GP paddock, you probably had a lot of pressure to perform as it was a job. Now you’re racing for fun and have another job, does that help take the pressure off?

Priit Ratsep: Of course but it mostly takes the pressure off when I ride at home. I can say hey, I’m a hobby rider or something (laughs). When I am here (at the MXoN), the pressure is still there you know. If you are picked for the team you need to perform. Over the years I think this has been one of the strong points for me because I can ride as fast as home when I come out and ride a difficult track like this. For sure, we have good riders in Estonia but to ride in these conditions, I think this is a different game. I’m 28 years old so I’ve raced quite a lot here in European and World Championships. This is where I think the experience comes to play, I’m super happy about the day.

Gatedrop: Back to work next week for you, that’s pretty crazy after finishing fourth with your country at the MXoN!

Priit Ratsep: What can I say, these are all the choices we make and I am happy with the way I made my decisions. Yeah, on Wednesday I go to work (laughs).