Interview: Prado on 2019 and his future 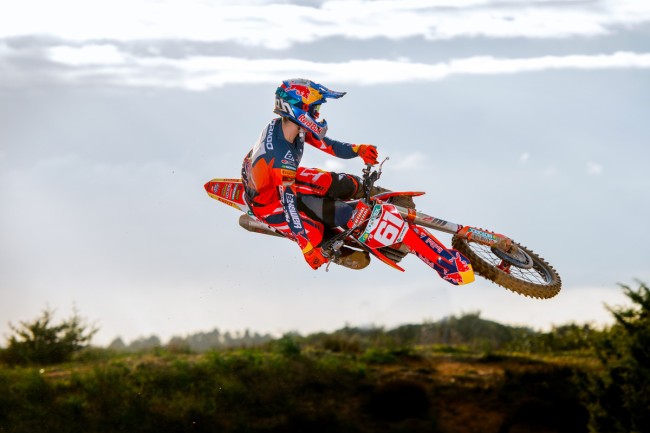 -Shortly after his 18th birthday, an even stronger version of the Galician sets off as the favorite in his class.

– “It’s going to be a tough year, but we’ve worked very efficiently during the winter.”

As the plane landed on the Barajas airstrip, the pilot welcomed the passengers to Madrid and called for a round of applause for the brand new Motocross World Champion, who was accompanying them on that flight from Bologna. In seat 17B, a Galician boy blushed under a Red Bull cap. Shortly after disconnecting “airplane mode” on his smartphone, the messages started cascading through, the first of them made him shout out in amazement: “Shit, it’s the King!” Jorge Prado was being embraced by all his fellow Spaniards, starting with the Head of State himself, and was ready to start celebrating his long-dreamed goal of becoming motocross World Champion.

This was the last flight of the 2019 World Championship season. Next Monday Jorge and his team will board a plane for Buenos Aires on their first trip of the season. The start of a tour with twenty stops and with the novelty of being the first season for the young Galician as a defender of the title. In the circuit of Neuquen, host of the first race, Prado will already own the coveted red plate: “When you come back as a champion you know that everyone else wants to beat you but my mentality will not change for the championship, I have to try to win but without making mistakes. At the moment I’m calm because I think I’m well prepared for it.”

In 2018 Jorge had a difficult start to the season with an elbow injury in winter that prevented him from taking on Argentina in good shape. This year his preseason has not had any incidents: “We have worked very hard and are at a much better place than last year, we have taken a step forward, focusing on improving physical preparation, on being stronger in order to gain speed and endurance. “The result has been proven in the three races of Internazionali Motocross, the Italian Open that has served as a strength comparison between the favorites for the World Championship: “They turned out to be very good races, I won all three and I was able to challenge myself in the superfinals against the 450 cc bikes which forced me to push. Not all the riders were there and it’s only a pre-season series, but it has helped us to see that the bike is working well and that my preparation has been good.”

NUMBER ONE WILL HAVE TO WAIT

Prado will ride with number sixty one on his KTM (they call him SixT1), after making a query with his fans on social networks. The result was a draw and in the end it was the rider himself who made the decision to honor the MXGP Champion who is in his opinion the true number one. Facing the champion will be several of his rivals from last year and a good batch of young newcomers to the category: “I think it will be a tough championship. Jonass, who was the most dangerous is gone, but the rest of last year’s Top 5 will stay I’m sure everyone has improved, and there are also new riders who are looking to get into the top ten.”

– What about your new teammate Tom Vialle?

– “He is a good rider and will have good races, but it is his first year in the World Championship and it has to be a learning season for him”.

Like any champion and despite his age, Jorge shows the necessary maturity to know that his greatest rival can be himself: “You are the source of the mistakes that can cost you a championship, it is very difficult to always be in the lead and stay focused to avoid making any mistakes.”

– Do you feel any pressure from the people, especially now that you are considered the favorite?

– “I try not to think about it, I do not feel the pressure, I focus on my work and the results will arrive.”

In that sense, the Lugo native is very pragmatic and tries not to “get in his own head” with external factors. The same thing goes for the calendar: “I almost never look at it, it is what it is and I have to adapt and get the best out of each terrain and each track, but I do not like that Spain does not have a Grand Prix despite having a world champion, it’s a shame!

At least Jorge will feel at home amongst the Argentinian fans at the first race of the season next Sunday March 3rd: “It’s a very special GP for me, with a lot of supporters, a big crowd, a spectacular circuit and a very special terrain, different from what we will find in the rest of the countries. I like it as an inaugural race.” He will also race in Lommel, his second home, and several times in Italy, where his team is based and where he currently lives: “I miss my country, but I have become accustomed to living where my profession requires me to. It is where I have to be right now and I enjoy it, of course I would like to be with my mother and my sister, but for now this is the most appropriate situation.”

Jorge’s future is also starting to become a talking point. At the moment he still has a contract with KTM Factory Racing, but there are always questions about the future; there is no doubt that his focus is completely set on MXGP and even more after his exceptional performance in the mixed super finals of the Internazionali: “It is true that I was able to fight with them and hold off many of the leading riders of the MXGP World Championship, but still It’s early to talk, I was riding a 250 and that means having less power and speed, but it’s also true that a 450 requires more strength and endurance, and I do not think I am ready yet.”

-The eternal question seems to be about the USA, isn’t it?

– “Yes of course, after the Motocross of the Nations result I have spoken with many important people there who insist that I go. I am not ruling out any possibility, but I try not to think about it either, I am now focused on the MX2 World Championship and the time will come to study, negotiate and those things. We will keep going step by step.”

On Saturday 2nd, in Patagonia, the engines will start. The world’s best riders in search of the 2019 title. Everyone wants the Prado’s red plate, but the Galician has learned his lesson and owns a clear road book towards one only objective: his second World title.