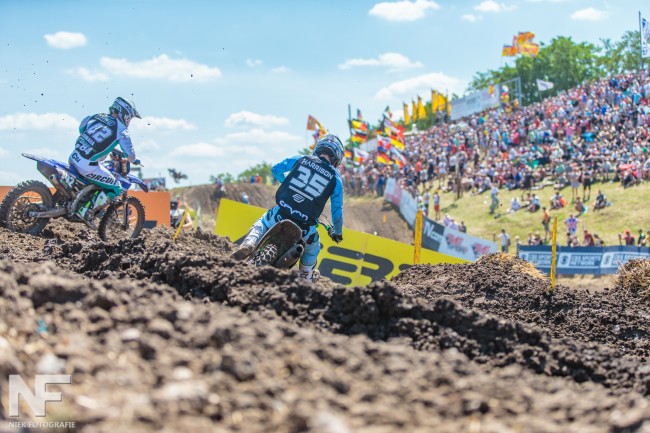 This was despite coming into the season late and unprepared after a last minute call by Bud Kawasaki before the Trentino Grand Prix in Italy, round four of the 2019 world championship.

But Harrison kept an open mind, showing enough speed and potential to stay with Bud Kawasaki next season and, as Tom Jacobs discovered when catching up with Harrison at the Red Bull Straight Rhythm, he has much bigger goals for 2020 now that he knows the way around the world championship tour and tracks.

How is it to be back in the US?

It feels good, I love the US, I was born and raised here, so it’s nice.

Are you going to stay here in the winter to prepare for the new season or what’s the idea?

Yeah I’m going to go down to Florida, it’s real sandy it’s kinda like the Netherlands. I’ve ridden gnarlier tracks than Lommel in Florida, the sand is kind of exactly the same. you also have that darker sand there, where it’s kind of hard underneath which I saw a lot in the Netherlands and then you have the really, really deep sand. I would rather stay over here until February  before I go over there because I know it’s going to be cold and rainy!

How was it to come into the season in May?

It was weird, it was a last minute thing, I jumped on the bike at the last minute and did that Trentino race last minute. I just had to adjust everything, adjust to the tracks, adjust to where I’m at, it took a while but I feel pretty comfy over there.

What did you think of the bike?

What is the goal next season now you know the format and the different terrains?

A lot of guys are leaving the class…

Yeah, there are a lot of guys leaving the class that makes it better but you still have young guys coming up and they are all fast over there!

What GPs have you marked on the calendar next year that you feel you can shine at?

Germany, I was really fast there, that could be a good GP to try and win. I need to work out Lommel! (laughs) The Euro guys are so fast in sand and then Indonesia, I didn’t do bad the first round, Loket I was really gopd too but had some bad luck there (bike issues), but I feel like all of them should be good.

Is it a little bit in the back of your mind to make the Nations?

I mean yeah I would love to make Nations, to represent America against the Euros, that’s really my dream, but I’ll have to work my ass off to make it happen.

Who do you see as the top five guys next year in MX2?

TKO for sure, Geerts, Vialle is fast – I think that KTM helps him a lot! The Yamaha guy, Watson and Renaux – he is good he always up there. They always get starts, I’ve never got a start to prove myself up front. I don’t know, I believe I can beat them, so…

What’s the difference in bike between the factory Husqvarna and the Bud Kawasaki?

I know they put so much R&D into the KTM’s they are kind of running three years in the future, we are running 2020, we are not straight out of the factory so there are a few big differences there. but you can definitely outride them, if I can out just outride the KTMs I will be fine.

Is there a bigger advantage in Europe because there is no production rule?

It’s definitely more fair in the US because all the bikes are pretty similar and all the factory teams are pretty good and then over in Europe it’s a little different, you get factory supported teams and it seems Husqvarna and KTM are the only factory bikes and then Yamaha. It’s good because you have more teams over there so that’s nice.

Is next year your last year in the class (MX2) or do you have two years?

I have two years, we will see if I do the third year, I wouldn’t mind it.

What has been the biggest adaption coming to Europe?

I guess just really the tracks and how much travelling there is, you travel vast distances so it’s hard sometimes.

But you do in the US as well?

Not as much, I mean you can get a two-hour flight to most places and sometimes you can drive to the races but when you have to fly to Indonesia, Asia, it’s tough on the body.

Is that something you’ve learnt how to deal with better for next year?

Yeah I had to take a lot more recovery days rather than just grind myself into the ground, it is all learning.