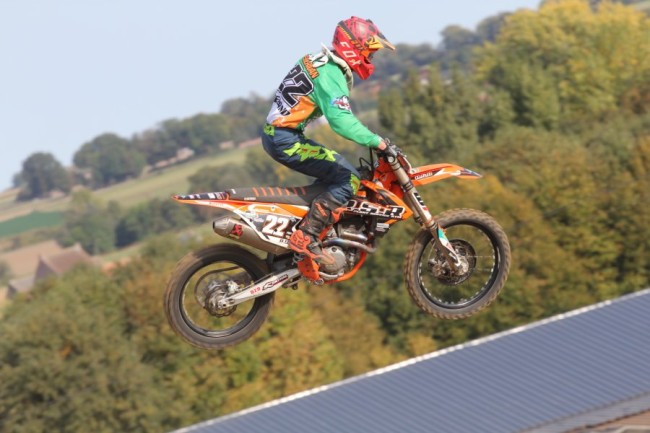 On the prestigious event..

The Coupe de l’Avenir is the most prestigious and historic event in World Youth Motocross. Held annually since 1967, the top riders in youth motocross compete with the best in Europe over a weekend in a three person national team. Past multiple winners are France, Great Britain, Belgium, Germany and this year, Ireland won for the first time. Fourteen countries competed for the title. The Irish team is Jake Sheridan (KTM 250f) from Dublin, James Mackrel (Yamaha 250f) from Belfast and Jack Galvin (KTM 125-2T) from Cork. These riders are selected by the all Ireland Motorcycling body MCUI who provide support and financial aid to send the riders abroad. This is the only team event in youth motocross, the adult equivalent was held in Michigan USA over the same weekend where the adults came 14th. The riders race all year round against each other in both Ireland and in Great Britain and this is the only time motocross riders get together from North and South to represent the island of Ireland.

Racing at this event is ultra competitive with the riders learning their trade here in the European heartland of motocross. It is a proving ground for professional motocross and riders excelling here will be high on the radar for GP teams on the lookout for the next big star.

The track is fast with hard packed clay. It is on grassland which has a ravine zigzagging through to create jumps with huge drop offs and steep launch ramps. The jumps are almost impossible to climb on foot. Ireland qualified in 4th position ensuring good gate selection. Mackrel and Sheridan opted for 250f bikes as the new 450fs are just too powerful to realize their full potential in this track. Jack Galvin’s class the under 17s are restricted to lesser powered 125 two strokes and he was inevitably locked in a battle at the rear of the pack with his international counterparts. During the first race Mackrel came out of the gate in 16th and worked his way back to second place and got held up by a back marker to finish third. Jake Sheridan rounded the first corner in tenth and battled with Michael Ellis from GB to finish sixth place. In the second race Mackrel and Sheridan came out of the gates in tenth and eleventh and battled through to fifth and sixth respectively. James Mackrel put in this result with a puncture in his rear wheel from a third of the way through the race!

Coming in to the final race Ireland were in second place overall with two finishing positions between them and Great Britain in first and Denmark one position behind in third. It was up to the two older boys to put in two more good results and Jack Galvin had to beat his British 125 rider Adam Collins. Adam had beat Jack every other race over the weekend. Galvin promised he would and he did- by five places! Jake Sheridan put his usual smooth professional performance and finished eighth after a massive battle with Sweden’s Gerhardson and Belgium’s Natale. James Mackrel got t-boned by a Swedish rider at the start of the race injuring his left calf and smashing his rear brake lever in to the side casing causing a leak of oil. All through the race the bike was smoking dangerously and though in agony with his leg James Mackrel’s never say die attitude and grit got him back in to ninth place.

With the best seven out of nine total results counting it took a few minutes for timing control to announce the winner – Ireland 63 points, Denmark 66 points France 69 points and Great Britain on 80 points.

Ireland brought two other teams of junior riders: 65cc, Jake Farrelly (Husquavarna-Navan), Markuss Kalnins (KTM – Drogheda), Gabi Golturenko ( Husquavarna – Rush, Co Dublin) 85cc: Drew McCreanor (KTM-Armagh), Reece Ross (KTM- Belfast) Ross Simpson (KTM- Craigavon) There was some misfortune with these teams which impacted on their results; Jake Farrelly’s bikes were stolen from the track and he struggled on a loaned bike which he fell off from as it was not set up for him. Drew Mc Creanor tumbled up one of the launch ramps and broke his collar bone. Although the other boys tried their hardest the results for the 65s were 12th and the 85s 13th.