Interview: Maxime Renaux on the level of MX2 and his Valkenswaard podium 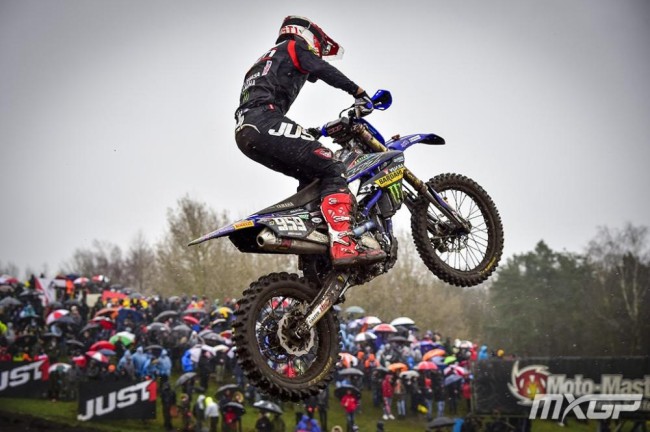 Coming into the 2020 MX2 World Championship with no real clear favourite the class is wide open and Maxime Renaux comes into the season as one of the underdogs. The French talent has stayed with the SM-Action Yamaha team for this year but he’s now got his hands on factory engines which will make a difference.

We’ve only had two rounds of the MX2 World Championship and Renaux got on the podium at the last round in Valkenswaard going 3-3 looking mighty impressive in the sand.

If Renaux continues to improve and stays consistent he has the potential to surprise this year and so far so good as he sits fourth in the MX2 World Championship after the first two rounds.

We caught up with Renaux to discuss the level of the MX2 World Championship that looks wide open and his impressive podium at Valkenswaard.

Gatedrop: Maxime, that’s your second ever podium in the MX2 World Championship. How does this one compare to the first one you had at Imola?

Gatedrop: Coming into the season what where your expectations – to be consistent, battle for podiums or go for wins?

Renaux: Just to take the races one by one and try to focus on myself with no mistakes. I don’t want to go too much up and down with the results, I want to be consistent but consistent at the top places. For sure I would like to be on the podium at the end of the year so we will try to do our best. We will work and see what we’ve got.

Gatedrop: A lot of riders moved out of MX2 last year but what’s the level like this year in the class? There’s always new riders stepping up.

Renaux: Yeah, new riders always step up and there’s even a new brand with GasGas and they are official bikes. There’s a lot of riders that can fight for the top steps, there’s between five and ten riders that can fight at the front. It’s good that not at every race it’s the same winner, it’s good for the championship. I think we will have a lot of winners this year.

Gatedrop: The past few years Prado dominated and before that we had Jonass, this year is more open and knowing a lot of riders can win, what’s that do for your mindset?

Renaux: You do think about it and your open to the idea that you can win the championship, nothing is impossible now and I don’t say that when Prado was in the class it was impossible but he was one or two steps faster than us. Now the championship is open and there’s more motivation.

Gatedrop: I know you’re with the same team as last year (SM-Action Yamaha) but I believe the team is running factory engines this year. Just how much better is the bike this year?

Gatedrop: On the first round at Matterley Basin, what’s your thoughts on it? You rode well in the second moto but a bad start in the first moto made it difficult.

Renaux: Yeah, I crashed two times on the first lap so it made it difficult because I started way back, the riding was good in the first race. I didn’t feel so good at the beginning of the second race but overall I wasn’t so happy with how it went. It was the beginning of the championship, the first race so I didn’t want to get too excited and make mistakes. If I could have done the podium there I’d take it but I just need to focus on myself and not try to go too fast too early in the season.

Gatedrop: I need to check your passport! You’ve pretty much always been better in sand and that’s not typical of the French. What would you put that down too?

Gatedrop: At the moment do you feel as comfortable in the hard pack as you do in sand or is that an area for improvement?

Renaux: I really enjoy riding the sand and hard pack. I don’t think there’s a good part or a bad part, I feel the same at both type of tracks so I think this is a positive point for the championship. I want to keep going and be consistent.