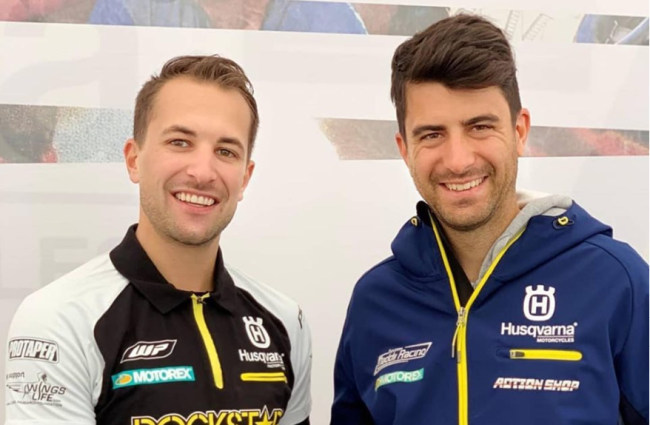 Heading into the 2020 season things are looking great for Marco Maddii and his racing team. The Italian who has plenty of experience as a rider in the GP paddock now has a very successful race team as well.

Going into the 2020 season, Maddii has secured factory support and his team become the official Husqvarna Junior team.

Alberto Forato will stay with the team but move into the MX2 World Championship with the talented Mattia Guadagnini contesting the EMX250 series after a dominate year on the 125cc.

Also with the team are new signing Max Spies in the EMX250 class as well as Federico Tuani and Barbaglia Eugenio contesting the EMX support classes.

We sat down with Maddii to get his thoughts on his team and much more.

Gatedrop: It’s been confirmed that Maddii Husqvarna will become the Husqvarna Junior team and receive some factory support. You started the team pretty small so it must feel amazing to get this support for 2020? The hard work paid off!

Marco Maddii: Yes, I feel pretty good about this, I’m very happy to have the trust of Husqvarna and move to the next step. It’s true I started with team three years ago but I’m sure we have a lot of potential and we can do great things. Starting with Facchetti in 2017, Guadagnini 2018 and Forato 2019 we achieved great results.

Gatedrop: Just on 2019, Alberto Forato and Mattia Guadagnini had wonderful season’s. Before the season did you expect to have such a good season?

Marco Maddii:  Yes, I expected to see them at the top and to fight for the titles. With Mattia I was more sure, Alberto has been our bet but I saw he had great speed from the beginning.

Gatedrop: Guadagnini moved up from the EMX125 class to contest the last two fly away MX2 World Championship races and he rode really well. I know he’s supposed to ride EMX250 next year but is there a temptation to let him race MX2 now after he impressed?

Marco Maddii: Yes, Mattia will ride the EMX250 and most of the mx2 (rounds that don’t collide) so he has the chance to make a lot of experience and races. I believe it’s more important for him to learn to menage the pressure of be a title pretender.

Gatedrop: Forato semms like a funny guy and always makes people laugh! What’s he like to work with?

Marco Maddii: Alberto is hard worker, never tired and brave! I try to keep him with his feet on the ground and stay serious when we are training. For the rest this is him so it’s part of his character to joke and laugh.

Gatedrop: What do you expect from Forato in the MX2 World Championship next year? I think he can do really well but starts might be an issue..

Marco Maddii: I hope he can be in the top ten every time and put the goal to get in the top 5. I think he has the talent for that.

Gatedrop: The team have signed Max Spies for 2020, I was shocked to read that he’s still only 15 years old! He has a lot of potential, what do you expect him in 2020 and what was the reason to sign him?

Marco Maddii:  Yes, Max is very young with a great potential. I hope to see a consistent season and learn from every race. To get points every time is the goal. We wanted him in the team because is one the best guys in Germany now and still very young.

Gatedrop: I was a little bit surprised that the team didn’t keep Raf Meuwissen for 2020, before his injury I thought he rode really well. What was the reason for him leaving in the team?

Marco Maddii: Raf is a very good guy and it was nice to work together in 2019. Simply he had good sponsors to race in Holland and not for an Italian team so we took the decision to stop.

Gatedrop: The team will also have Tuani contesting the EMX2T series and Barbaglia Eugenio, the team seems to enjoy supporting the EMX classes too, what’s the reason for this?

Marco Maddii:  Yes, we support the emx classes and even if Eugenio and Federico are only 18 years old they will race the EMX 2T because this class is more accessible for them, right now the EMX250 class is too big a step.

Gatedrop: When will the team start the winter preparation and testing for the 2020 season and what are the team’s plans for it?

Marco Maddii:  We already started, to tell the truth we never stopped. We only took it easy for a couple of weeks but we never stopped. I don’t like to stop, I prefer to keep the rider active and have fun with bike in this part of the year. We are based in center of Italy near to Florence.

Gatedrop: The 2020 calendar has recently been released, what’s your thoughts on it?

Marco Maddii: It’s a tough calendar and to ride the full season with Forato in MX2 is hard but this is how it is so we go for it. Today, Motocross means lifestyle and we are busy all year.