Interview: Livia Lancelot on being a team manager & 114 Motorsport 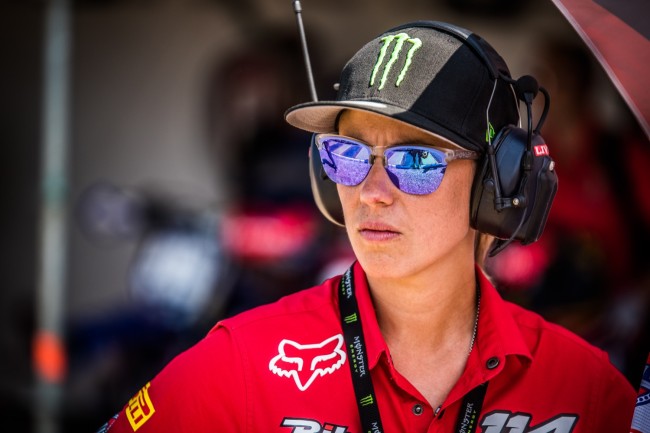 It’s now been two season’s for ex WMX rider, Livia Lancelot as a Motocross team manager. Lancelot is the team manager of the 114 Motorsports Honda team and has worked with Hunter Lawrence, Bas Vaessen, Mitch Evans and Zach Pichon over the two season’s.

There’s been some up and down’s for Lancelot but she has podium as a team manager in the MX2 World Championship thanks to Hunter Lawrence and Mitch Evans.

Injuries have been a big blow at times but overall, Lancelot is doing a very good job in her short time as a team manager.

We caught up with Lancelot at Assen during the MXoN to discuss a range of topics.

Gatedrop: Livia, you’ve been a team manager in the paddock for two seasons now. You’ve had some highs and some lows but what have you learnt so far as your time as team manager?

Livia Lancelot: Yeah, like you say, some up’s with some down’s.  I guess it’s racing, you know and nothing to do with the work of the team. It’s like riders, injuries, results, they can’t always be 100% all the time. We’ve had to deal with some down’s but so far we’ve had two really good season’s.

Last year for our first season as an MX2 season, we had two podium’s. We did the same this year again so I’m really happy about the way it’s been going. It keeps improving every year, the sponsors are happy and more people are coming. It’s not easy because we are still a private team, officially Honda but we are still a private team. It’s not easy every day but I’m pretty happy about it.

Gatedrop: Being an ex rider and now a team manager. How would you compare the two different worlds? I’m assuming you’re a lot busier as a team manager!

Livia Lancelot: (laughs) It’s totally different worlds, there’s nothing to compare actually. It’s like sometimes, I’m as tired as I was when I was riding but it’s definitely not in the same way. I spend hours on the computer doing emails, phone calls and you get tired from it but not physically, just mentally. Compared to going home after a good day of riding, I was just falling asleep because my body was destroyed lets say. Now it’s way different, but it’s not the same pressure and not the same stress, everything is different. I have a lot of people I’m with now, the staff – mechanics, riders, it’s different but I like both.

Gatedrop: Being a former rider yourself, that probably means you’re more likely to listen to them and more likely to give them what they want. I guess that would make you less stubborn than some team managers and what’s it like working with the riders you’ve worked with this year?

Livia Lancelot: When they arrive the first day of riding, I know exactly what they will ask. I’ve been there for so many years that I know what they want and I know what they need. I honestly try to do my best all the time to go in their direction. Of course, it’s not always possible because of budget and a lot of things but I definitely try to be on the side of my riders all of the time. Maybe more than other team managers, I don’t know, I’m not in a position to say that. But from being a rider before it helps to have a good relationship with them.

Gatedrop: On Mitch Evans, he started the season with a real bang getting on the box at Argentina, that’s a great place for you with Hunter Lawrence getting a podium there last year too! With Mitch, he had injuries and stuff mid-season but overall where you happy with his season?

Livia Lancelot:  For sure I am happy with the season. We started with the podium in Argentina which I really didn’t expect. I knew Mitch was fast and I knew he could podium but during the 20 rounds not at the first one. During the second moto when we started to count with the mechanics we weren’t ready and I was like “f**k, it’s a podium”. I just ran back to the team truck to find a jersey in his bag (laughs), we weren’t ready for it at all. It was awesome to start like this.

Like you said, with injuries and stuff, it’s really hard with the Aussie’s to come over and understand all the travelling, the different countries. It’s a long season with twenty rounds, it’s really hard for the staff and the riders so Mitch started to struggle but it’s the way it is. We tried to help him as much as possible but he didn’t find away to come back as strong as he was at the beginning, so everyone learned from that. Hopefully next year will be better.

Gatedrop: Just on Aussie’s, sometimes it’s hard to know how they’ll perform in the GP paddock and some of them get a bit of a culture shock but you’ve been quite lucky to work with two top guys, you must be happy with their attitude as well as their speed?

Livia Lancelot: I won’t say we are lucky with that. With Giacomo Gariboldi we are spending time to look at the video’s over there, look at all the lap times, timed practice, all the moto’s. I can give you all the stats of all the Aussie riders the last season of every round. So, it’s not only luck, we are really looking at everything. Then it’s a lot of work to get them here to put them in the best position to make results.

Like you said, they have a great culture over there and they are really motivated, easy to work with and even this weekend again with Kyle Webster. He needed a bike for the Nations so we give him Mitch’s bike, he almost holeshot the qualifying race and he did a great result this weekend. We definitely like Aussie’s and we keep working like that.

Gatedrop: Just on Zach Pichon, I feel like he improved a lot this year, where you happy with his progress? There’s also talk he’s going to Enduro next year, would that be a bit of a shame because he still has lots of potential I feel as a Motocross rider…

Livia Lancelot: For sure, he improved a lot. I mean last year he was struggling a little bit to get in the points. I don’t know right now how many points he got last year but definitely this year was really good. He almost reached the top ten a few times but some times had some small bike issues and stuff which meant he couldn’t be in the top ten. He really did improve, he’s only 18 years old so he can keep on improving, he has a lot of years to do in MX2.

Apparently he wants to try Enduro, he was racing the final round of the World Championship but I don’t know if its completely decided yet for him. For sure, he can do good either in Motocross or Enduro because he is some talent, we know where that comes from (laughs). He is a good rider.

Livia Lancelot: Actually, every year we improve with Honda. This year, we got more support from them with parts and next year we should get even more again.  It’s step by step, you can’t ask a factory like Honda, Japanese people to trust me in like a few months, you know? We proved last year we can do a great job, this year they give us a little bit more support and trust. They are happy about the work we do and it will be a little bit better next year. Thanks fully to Giacomo who is fully behind me as well and he’s the one that also pushes for everything. Step by step we are getting there.

Gatedrop: Just on next year, you can’t tell me too much yet, but can we expect the announcement soon? Rumours suggest it’s going to be two Aussie riders!

Livia Lancelot: (laughs) Yeah, everyone knows that I really like Aussies now so it’s possible that we will have two Aussie’s in the tent next year. Nothing is 100% signed yet, we are still waiting some direction from Honda. It’s not totally totally signed but it will be announced hopefully pretty soon.

Gatedrop: Will you have any EMX250 riders next year? I know you had Axel Louis from France this year, will you continue to support him?

Livia Lancelot: Yeah, Axel is like a supported rider. He just turned 15 this year and is really young. He should be on the 125cc but he loves the four stroke so he will still be on the side of the team next year. I will keep giving him the support but he’s not officially in the team yet, he’s too young for that. He will still go to school this year, he’s not a pro rider yet but we will keep helping him. At the moment, we don’t have any information about if we will keep another European rider, it’s not decided yet.