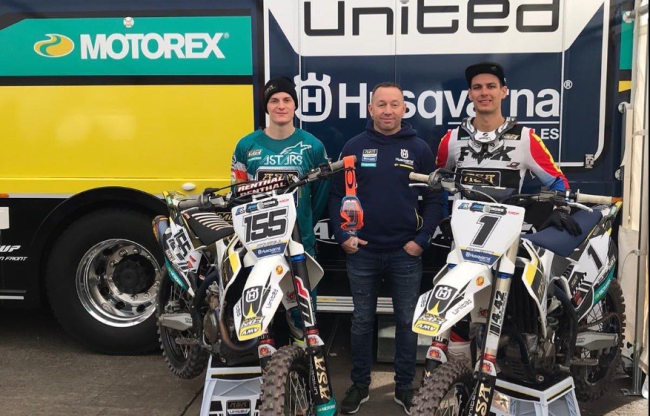 The ASA United Husqvarna team have an impressive setup, it’s hard not to be impressed by it and Lee Tolan, the man behind putting the team together has only ran a team for just over two years which makes it all the more impressive.

The team are having their first year contesting the Arenacross UK series with Cedric Soubeyras and Jack Brunell – luck wasn’t on their side at the first two rounds in Belfast but there’s still plenty of positives to take for them and the team.

Heading into the outdoors, the team will line up with the impressive line up of Brent Van Doninck (MX1) and Jörgen-Matthias Talviku (MX2) which will see both contesting in the British Championship.

We caught up with Tolan to get his thoughts on the team and much more.

Gatedrop: Lee, we’ve had two rounds of Arenacross here in Belfast and your new to the series, how do you find it and are you satisfied with how your riders done here in Belfast?

Tolan: Yeah, I mean we got unlucky but Hsu rode really well. We struggled with our starts in the second races but we managed to get second overall with Cedric which we are over the moon with. I mean his goal was to be on the podium and he succeeded so we’re happy with that. Jack was very unlucky, he rode a bit tight during the first night and had a bit of bad luck, he struggled and didn’t get through to the main. Today (Saturday), it was kind of a flip, Soub was struggling and Jack seemed to find his flow. Jack had a second and rode really well, I was pumped with how he was riding, the bike and his riding was nice. The Superfinal, carnage (laughs), I thought we were going to have both riders on the podium but it didn’t quite go to plan. Soub went down, Jack was going nicely so the podium was still on and then he slid down in the corner, gutted for him.

Overall, I am happy with the way things have gone. We had a little bit of bad luck which we can’t do anything about but everyone here has been amazing and all the guys have done their best, we were just unlucky. I might be new with a team but I’ve been involved in it for a very long time. We just have to dust ourselves off and focus on the next one. This Arenacross malarkey is a bit of a lottery. If you’ve got Soubeyras on a proper Supercross track, he would dominate most of the riders but here you can come through as a promoters choice and win.

I am happy, I’d have liked to have gone away with a win but I am used this kind of result its bad luck but we’ll take it and we are all in one piece which is the main thing.

Gatedrop: Just on Motocross, you’ve only had a team for a short period of time but you’ve already managed to gain Husqvarna UK support for 2020, you must be pleased with that as it shows you’re doing something right? Some teams never get a chance of that support.

Tolan:  For sure we are doing something right but I’m my own worst critic. I feel like I never do enough to fulfil my own expectations but other guys obviously see it, like Husqvarna UK. We’ve been working with Matt for a while now and we were waiting for the opportunity to arise. We obviously done enough so we are over the moon with it. Like you say, some team’s try their whole lifetime to get it. I’m very grateful for it, any bit of help we can get is well appreciated.

Gatedrop: Just on the line up for the Motocross season, it was looking like Pocock would stay and partner Jörgen-Matthias Talviku, a good team! But then all of a sudden you get Brent Van Doninck – how did that all arise?

Tolan:  Mel is still a very good friend of mine. We just couldn’t get a deal done, at one point we thought we had a deal and then for one reason or another it didn’t happen, we both felt we could draw a line in the sand. Mel is going his way and I’m going mine. I was then hunting for someone else, a friend of mine told me that Brent Van Doninck hadn’t got a ride, I called him and after 2/3 conversations we were able to strike a deal. I was unable to provide him with a full GP season like he wanted but I could provide 3 rounds.

I’m really pleased with that deal we got done and Brent so far has turned out to be such a lovely guy who put loads of effort in. His goal is to do a full season of GP’s, we are unable to provide that, I just can’t get involved that deep. I don’t have the money and I don’t think we could compete as great as Brent is. I’ve only had my team in the paddock for two and a bit years, a lot of people try to jump straight in at the deep end, I think that’s a mistake and  I won’t be making that mistake. 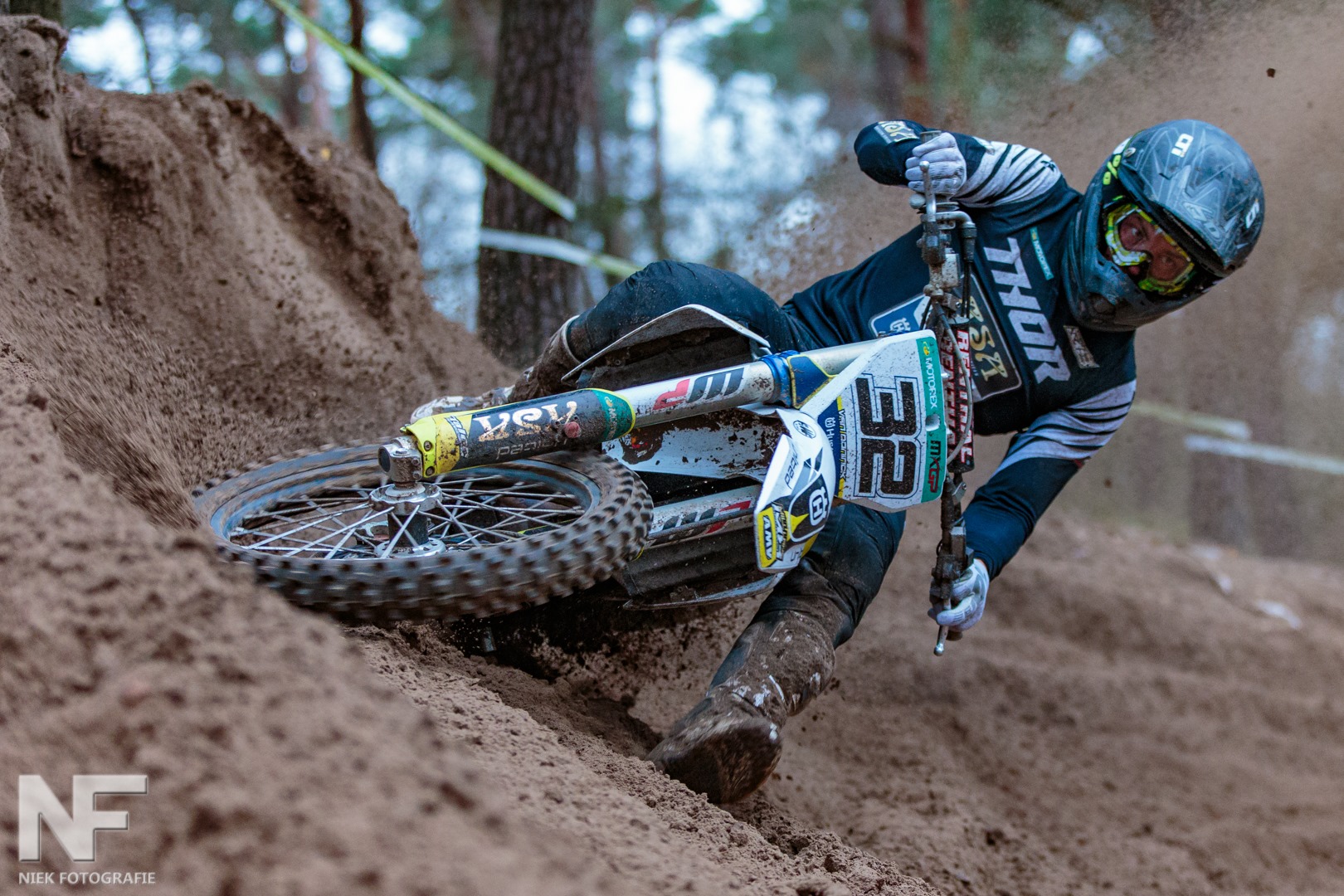 Gatedrop: I’m sure you’ve seen both riders on the bike – Jörgen and Brent, what are your expectations for them in the British Championship?

Tolan: I could tell you right now that Brent looks amazing, that the calibre of rider that he is, he should be successful and we should be successful. We are doing all that we can for him and he’s putting the work in, he’s so dedicated to being a top ten GP rider that he’s putting in the work as if he’s going to compete a full season of GP’s. I can’t fault him in that area but nothing counts at the practise track, it only counts when the gate drops. You can’t get too excited, he didn’t look too far off Herlings and he looked a bit faster than Guillod. We are all going in the right direction and everything is how I expected it to be and I just keep an open mind, like tonight Soub should be dominating but he wasn’t, I’ll keep my excitement for when we are on the podium.

Gatedrop: Brent is very talented, I rate him highly but perhaps mentally he’s a little bit weak. Is that something you think you can help him with? In terms of the 450cc, I think that bike should suit him way better!

Tolan: He’s definitely got the stature for the 450cc and we know it’ll suit him better. He will have all the power he needs but he’s also moving up to a class where everyone else is really fast. As far as it goes with Brent mentally, I don’t really know what his past has been like but I do know he’s had a podium in MX2 on the Yamaha and I know he kind of went from hero to zero over a few years. I don’t really know what had happened, I have spoken to him briefly about it but we try not to look at the past. We try to look ahead, he’s got a great future and it looks like he can do the job. He’s definitely looking good on the bike and I will be there to help him with anything that I can with the knowledge that I have. Any demons he may have, we will work together and try to get through it. I do know that he’s happy and I believe that when you’re happy then you ride your best on a motorcycle. I think that will be the ingredient for us to get great results. He has a good team behind him and we are there to help him with anything, hopefully that will be enough and his talent will do the rest, the proof is in the pudding as they say!