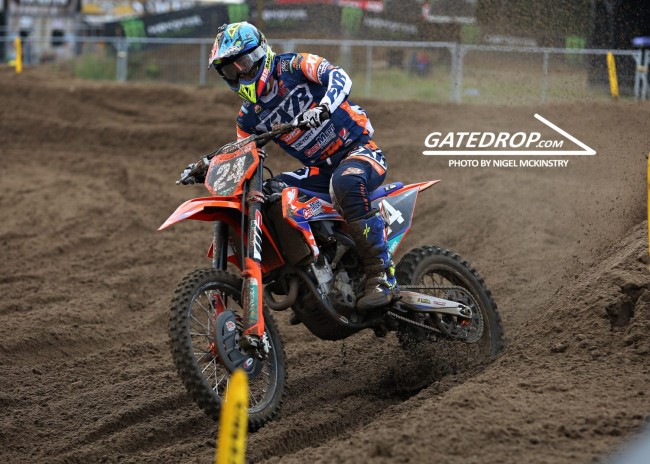 The young Norwegian raced his first MX2 World Championship in Loket and finished a very impressive ninth overall. A week later in the EMX250 series at Lommel, he got on the podium in second overall.

The young Norwegian has showed good speed this year and is certainly one to watch out for in the future.

We caught up with Horgmo to discuss a range of topics.

Gatedrop: Kevin, You were back in the EMX250 series at Lommel and had a great day getting on the box. Can you talk me through your races?

Kevin Horgmo:  In the first race, I took the holeshot and it was a matter of surviving after that. I haven’t been feeling well after Loket, I got sick on Sunday actually.  It was a really hard race for me, I just tried to survive as I said. Roan (van de Moosdijk) was a little bit in a class of his own but I was second for most of the race. Haarup passed me towards the end of the race, he had a higher speed and I just couldn’t do anything. I finished third and I was really happy with that actually considering just coming back from a jaw injury and also not being able to train in the sand going from the Zwarte Cross to Czech Republic and then back here. It was three crazy weeks with a lot of races just coming back from injury.  To manage that at one of the toughest races was really good.

I was not feeling very well this morning, a little bit better with my body but not 100% still. I just knew I needed to get a good start as I did, I was second from the beginning. At the beginning of the moto there, I just rode my own race and Forato passed me, he was pushing really hard so I couldn’t do anything about him. I think if I was 100% shape and was able to train in the sand lately, I would have probably been a little bit better than him and maybe get second. But that’s all excuses so I’m just happy with third place.

Gatedrop: As you mentioned you got sick at Loket, did that change your preparation for coming here? If so are you surprised to get on the podium?

Kevin Horgmo:  On Tuesday, I did a little bit of testing and then on Wednesday I was supposed to do some training. I couldn’t get it done, I just done a twenty minute moto or something and then I was completely dead. Probably it was good that I just stopped riding and tried to rest as good as possible because I knew this weekend would be hard.  A lot of the guys they go for moto’s the last week so maybe that had a little bit of an effect. I got ill but I am just happy with my two third places.

Gatedrop:  Just how did you find the track? Was there much difference between the first and second moto’s after some overnight track prep?

Kevin Horgmo:  I think it was actually much worse today (Sunday). You didn’t have those few spots were you could rest. Yesterday when I did the sighting lap I was like, “what the hell, are we going to race in this?”. It’s crazy but once you start to find your rhythm it gets a little bit better. Today, my back was killing me so when I started to sit down in the bumps, the trouble begins.  I was just trying to hang on and I finished in third.

Gatedrop: Just on Loket, that was your first MX2 World Championship race and you got ninth overall. Did you surprise yourself with that result? Not many riders can say they got a top ten overall at their first attempt.

Kevin Horgmo:  I was aiming for a points finish so it was really good. I knew from preparation this year that I had good speed. It’s just putting it all together. The first European rounds I was struggling to put two good moto’s together so that’s just it. I try to work on the consistency and also when I was injured, I got to step back a little bit, reflect on some stuff and then try to push harder. I was really hungry and motivated with it. It’s also the mentality with the starts I was able to put two good starts together. It really helped so then you can take it a little easier in the moto and try to finish good.

Gatedrop: In the past I feel like you’ve always had one good moto but then something would happen you in the second moto. Maybe pushing too hard sometimes but that’s all just an experience thing. Do you think now you’re able to manage a race better than in the past?

Kevin Horgmo: I think actually, the thing that I’ve been struggling with is so many hours between the moto’s in EMX250. On Saturday you have one moto and then on Sunday you wake up and have the next moto. With the GP in Loket, it was just a different feeling because you always go out on the track and you’re there to see the changes. With the European, you ride on a flat track in the morning and then you come out for race one and it’s completely different. With MX2, you get to ride it a little bit more and with both moto’s on the same day I felt better. I was pleased.

Gatedrop: Have you any plans to do any more rounds of the MX2 World Championship with only one EMX250 rounds remaining?

Kevin Horgmo:  For sure, not Imola. It’s a little bit too far, I’m going to start preparing for Uddevalla now and then we will see. I am entered for both European and MX2 so if I get the start in MX2, I will do that.

Gatedrop: Just on next year, I think you’re ready to make the jump up to MX2 now. Have you any plans for that and is that what you’d prefer?

Kevin Horgmo:  For sure, I would like to step up now that I’ve been at the top of the EMX250 for two years. I haven’t put it together in the championship but speed wise I’ve been at the top. I think now the next step is MX2 and that’s why I’ve been doing the wildcard entries for MX2 so I get a little bit of experience.  Hopefully I can get a deal to do the full MX2 series next year.

Gatedrop: Do you think it’s likely we’ll see you in MX2 next year?

Kevin Horgmo:  It’s really likely because I have some contracts on the table. We are still testing and stuff so we will see eventually.