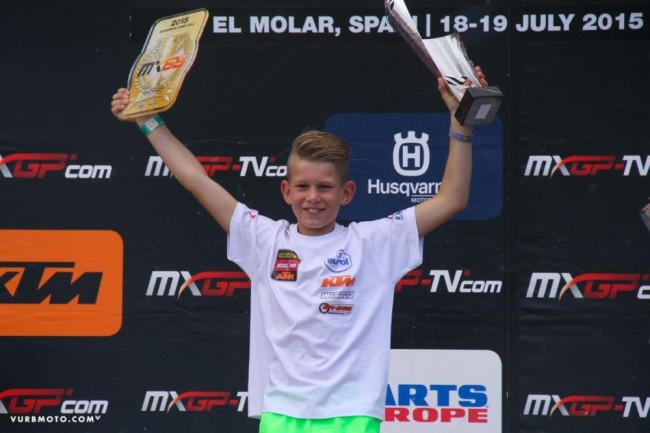 The weekend marked a special date for Kay Karssemakers as five years ago he become Junior World Championship in the 65cc class. The young Dutch talent was amazing as a youngster and people forget the talent he has. After his rookie year in the EMX125 class, there’s no reason why Karssemakers can’t be a front runner in the class this year.

We decided to catch up with Karssemakers  to discuss his special day winning the Junior World title in Spain.

Gatedrop: Kay, back in 2015, it was a great year for you as you became Junior World Champion in the 65cc class. Going into the event, do you remember the hype, you must have been very excited going into the race?

Karssemakers:  Yes, I was very excited. It was the second time that I was selected for the 65cc World Championship. I knew what I could do and I only wanted one thing. The weekend before the EMX65 final was in Latvia. I ruined this in the second moto. I won the first moto there, but crashed in the first lap of the second moto and came back from P36 to P6. It was all mud. With a 1-6 I became Vice European Champion 65cc, with the same number of points as the winner. I was very disappointed, but even more motivated for the World Championship in Spain.

Gatedrop: Can you just talk me through your races, from what you remember?

Karssemakers:  That weekend was really cool! The track was very nice, a hard track with many jumps. Not really Dutch, but I liked the track. On Saturday we had a free practice and a time practice. Both went well, and I had a second time both practices. The times were close, so I was happy with that. I knew it had to happen on Sunday.

In the first moto on Sunday I had a good start and started the race in second place. They had sprayed the track a lot, so it was wet in some places. For me that was only an advantage, the heavier the better. I took the lead in the first lap and rode my own race. With a 15sec lead I won the first moto. I was happy with that, but I knew I had to stay focused, because there was a second heat.

In the second moto I took the lead. This time the track was a bit drier and the second and third men stayed in my rear wheel. I remained focused and also won the second moto. When I crossed the finish I knew I had done it. With a 1-1 in the moto’s I took the 65cc World title. What a special weekend that was! 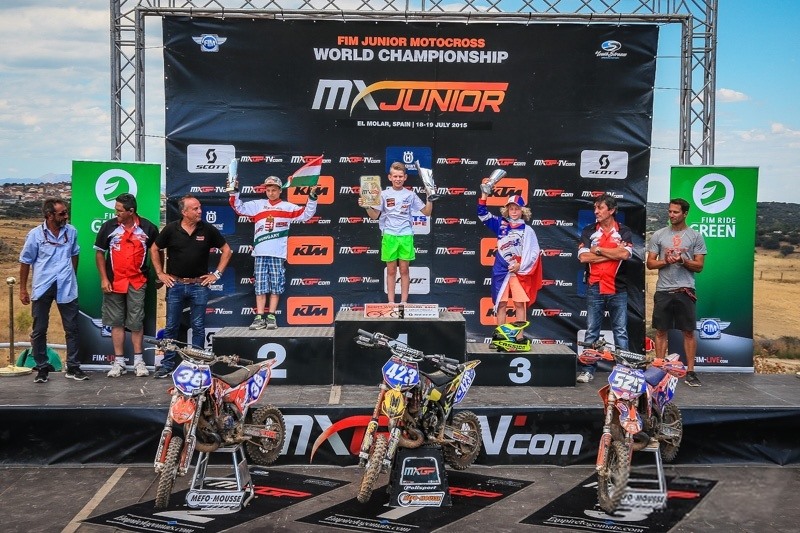 On top of the box!

Gatedrop: At the time, what did you think of the level? Do you remember some riders you were battling against and beat to the world title?

Karssemakers:  I think the level was already high then and still is high! Many riders were evenly matched so the level went up every race. In the EMX and the Junior World Cup, but also in the Dutch Open.

I was very young when I switched to 65cc and 85cc, most riders were always one or two years older. In Spain I took the World Cup 65 title while I just turned 11 years old. I remember fighting in the EMX finals and Junior World Cup with Adam Zsolt Kovacs, Constantin Piller, Radek Vetrovski, Florian Miot and Scott Smulders, except Scott, they were all one year older than me. Now I still ride with these riders, but also with many more riders. The level is high.

Gatedrop: What were your expectations going into the event, did you expect to win and go 1-1 and clinch the title – maybe you surprised yourself a little?

Karssemakers:  Like I said before, I only wanted one thing. And that was winning! I knew what I could do, but then you have to do it. Luckily the weekend went the way I wanted, go 1-1 and get the title! 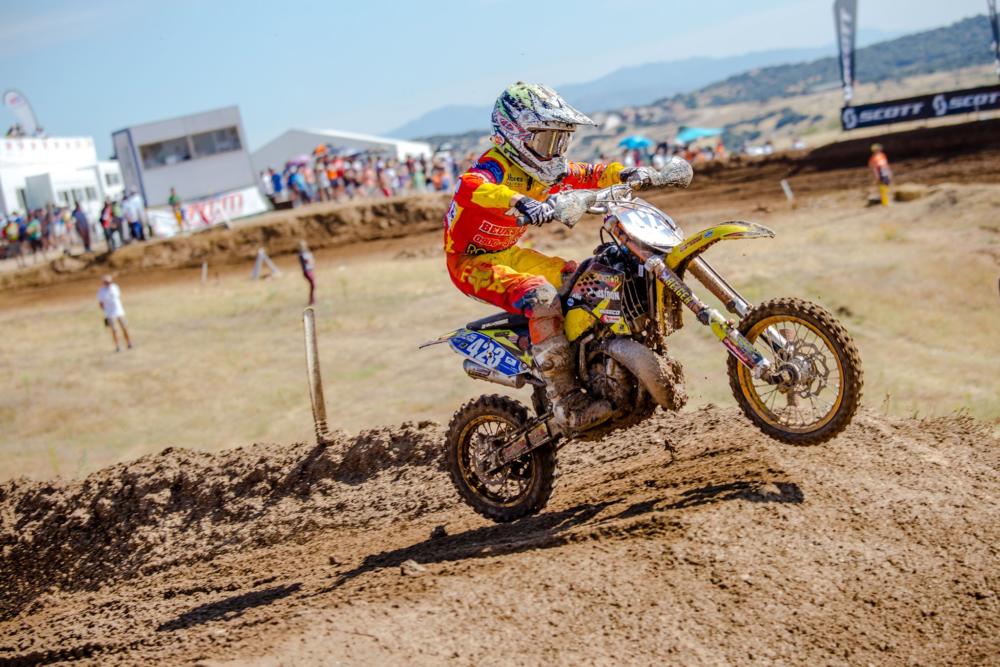 Gatedrop: Do you remember how you felt when you clinched the title?

Karssemakers: I was super happy! After the first moto I remained focused, because I knew that a lot could happen in the second moto. After the second moto I knew I had done it. I was happy, it was a really special moment. Especially when I was on podium, got the gold plate and the Wilhelmus sounded. I will never forget that!

Gatedrop: What was the track like at Al Molar in Spain that year – not exactly a typical Dutch track?

Karssemakers:  (laughs) No, it was not a typical Dutch track, but I liked it! It was a hard track with a lot of jumps. From the first free practice I felt good on the track, and that actually continued all weekend. It was a fun track and I enjoyed the ride!

Karssemakers: The Junior World Championship 65cc in Spain is definitely the best weekend of my life. It was so special and they never take that away from me!

Gatedrop: What races/memories stand out for the most and why?

Karssemakers: In addition to the Junior World Championship 2015 in Spain, the Junior World Cup 2017 in Estonia was also one of the most beautiful weekends in my career. I believe I was only 12 years old at the time. I surprised everyone and myself, I finished third in the World in the 85cc class, just two years after my World title in the 65cc class. My reaction when I crossed the finish line really felt like a victory!

The Junior World Cup 85cc in Australia was also really nice! There I was again third in the World in the 85cc class. Maybe I was not completely satisfied with that, but what an experience it was to be allowed to ride in Australia!

I also remember my first European win ever with a 1-1 in Emmen in 2015 on the 65cc! And my first European podium ever in Denmark in 2014 on the 65cc when I was just 9 years old. Lastly, my 4x Dutch titles were also good moments but the first one in 2011 was a special one! I was 6 years old when I became Dutch Champion for the first time and it all started from there..

Gatedrop: So far how would you describe your career since moving up to the 125cc contesting the EMX125 class?

In 2019 I switched from the 85cc to the 125cc. That was a difficult year, especially in EMX it often didn’t work out the way I wanted it to. But that is also part of the learning process. While I did become Vice Open Dutch champion in my own country. At the end of 2019 I decided to go to the MJC Yamaha Europe Official EMX125 team. We worked hard all winter and I was ready to start the season. Until I crashed just before the first race during a training in Spain. I broke my wrist and suffered two compression fractures in my spine. I missed the first EMX125 race in Matterley Basin, but the recovery went well and within 6 weeks I was back on the bike.

Unfortunately, then we had to deal with Covid-19. Fortunately we can now train again and if all goes well the competitions will start soon. At the moment I feel very good on the bike and I can’t wait for the races to start! It’s a pity I missed the first EMX125, but I’m going to do everything I can to make it a successful season!

Karssemakers: My goal is to race the GP’s within a few years. Ride for the podiums and win GP’s. Later to become World Champion in MX2 and MXGP and I hope that someday I can ride the Motocross of Nations for Team Netherlands!