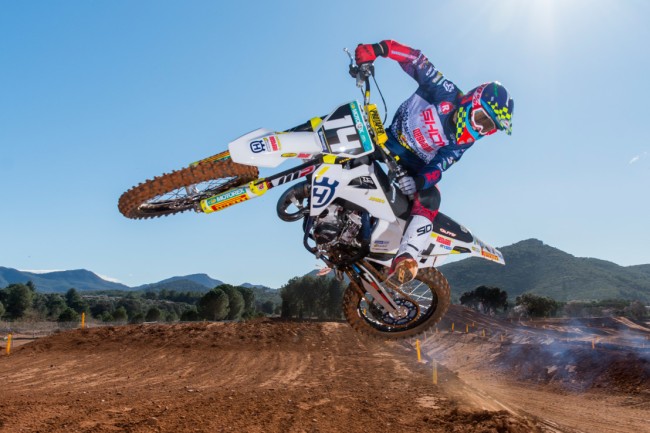 Wednesday, March 13, 2019 — This autumn Kay De Wolf (14) switched from the 85cc to the 125cc. He moved from a private team to the JM Racing factory Husqvarna team and started a thorough training program under coach Rasmus Jörgensen. Seems like a lot to deal with? Not for the ambitious young Dutchman. Even before the start of the EMX125 season in Valkenswaard, De Wolf has already chalked up two superb wins.

One thing is still the same however. Kay still sports his trusted number 14 on the bike. For Dutch sports fans the number will forever be synonymous with the genius of football legend Johan Cruijff. In motocross #14 belonged to De Wolf’s countryman and GP’s enfant terrible Marc De Reuver. In contrast to Kay’s illustrious predecessors wearing the number his modus operandi is completely devoid of bragging or ego.

The schoolboy / budding elite athlete is polite and modest, yet very precise in his words. At first glance, however, there is little that indicates that De Wolf is one of the greatest European talents in his age group. That is until you see the 85cc vice world champion in action. His results, perseverance and an undeniable potential were the reasons for Husqvarna to offer him a multi-year contract. This weekend the protégé of Jacky Martens will be lining up for his first important appearance in front of his home crowd at the opening round of the Dutch Masters of Motocross in Axel.

Few fans realise that no one in your family rode motocross before you, just like Adam Cianciarulo.
Kay De Wolf: “True! It’s only 500 meters as the crow flies from our house to the track in Eersel but my father had never been there before I started racing. We have a tree nursery at home and when my father went to buy a new quad for his job I got a small Suzuki quad. Two years later I got my first minibike and at the age of five I lined up for my first race. That’s how it started. As a child I always watched motocross movies, I learned so much from them. Jeffrey Herlings was my big example from early on.”

You made your 125cc race debut at Hawkstone Park and came out with a perfect 1-1 scorecard after an exciting battle with Joel Rizzi. That was a big shocker for many!
De Wolf: “It was a surprise for me too! I could never have dreamed that I would win straight away. Moreover, it was my first time in Hawkstone, but I enjoyed it a lot because it is an awesome track with some nice elevation changes. Of course I hoped in advance for a good result. Winter went well, I trained well and had a very positive training camp in Spain. The adjustment to the 125cc went pretty smooth actually. At first you notice the weight difference but I quickly got used to it and in retrospect the timing was right. In the end I just noticed that my 85cc wouldn’t go any faster, that I had reached its limits so to speak.”

A new class, a new start. Does it feel as if you’re starting from scratch again?
De Wolf: “Of course I know many of my competitors because I already rode against them in the past. Yet it is very different. Maybe those riders can handle the 125cc better than the 85cc? You never know in advance. In recent years I have also seen that some riders who were not at the cutting edge on the 85cc or 125cc suddenly step it up on an MX2 bike.”

We’ve seen some very spectacular photos of the team shoot. They’re awesome to see! Is style on the bike important to you?
De Wolf: “No, I’m not that concerned about it… I just want to win! I really felt comfortable and in control on the bike at RedSand, I think that shows in the pictures. It’s just a bit easier to make nice jumps on a 125cc. The proportions of the bike and the engine power seem to be a more rounded package you know. On the 85cc it’s more of a struggle to do big stuff, or it can get sketchy easily. For a nice jump you also need much more speed. At home I sometimes do some play riding. There are certainly things to take away from that, but ultimately it’s all about speed. ”

You’re the team’s first EMX125 rider since Pauls Jonass in 2013 and you’re currently the only one on a 125cc. How did the development of your new bike go?
De Wolf: “We have tested a lot. But I felt that every upgrade was super positive. I have learned a great deal from the whole process of testing itself. And picked up a lot about adjusting the suspension as well. We’ve found a good balance now and I’m really satisfied with the Husqvarna.”

You are now part of a factory team alongside the GP riders Thomas-Kjer Olsen and Jed Beaton. From who did you learn the most during the last couple of months?
De Wolf: “That would be my trainer, Rasmus Jörgensen in the first place. He is very professional and in general my physical training regime can be compared to that of Olsen and Beaton. Obviously they work with different weights in the gym and some other things have been adapted but in Spain I was training alongside them. The training sessions are quite tough, but I’ve certainly become stronger physically. In addition to working with Rasmus I received a lot of helpful advice from Jacky Martens. Sometimes it can be about very little things yet you just understand that he has so much experience ”

Many people compare you to Jeffrey Herlings. He also rode for Martens’ squad when he started his international career, and you’re from the same region. What do you think about that comparison?
De Wolf: “I am me and Jeffrey is Jeffrey! Whatever people think about having talent he’s worked really, really hard to achieve what he did. Just to see him ride is super inspiring and you can always learn from him. However it’s not as if I know him well or that we are regularly in contact. Actually this winter in Spain was the first time I got to know him a little better.”

You are about to embark on your first complete international championship campaign. The EMX125 series has seven rounds while the EMX85 and Jr. world championship are both decided in one weekend. That’s a big difference.
De Wolf: “That’s right, I definitely like that. At least now it’s not all down to one day or one weekend anymore. I’ve experienced what that can mean last year when I crashed in the first moto of the EMX85 final in Loket. Then and there was how I lost the chance to go for the European title! On the other hand, it allowed me to race carefree in the second moto and I won.”

What are the races you’re looking forward to the most?
De Wolf: “Probably Valkenswaard and Lommel. Both are home races, exactly 20 minutes from home! Maybe I prefer Lommel a little more. The sand is a lot deeper, which is what I prefer anyway.  (laughs) And of course the weather is better in summer! I grew up in the sand. As a young rider I did so many laps in the sand, which is very different from a French rider who grows up on hard tracks.”

What is it that you like about riding in the sand?
De Wolf: “The possibility to create your own lines. You have more options. On hard pack -at least when it’s dry- it’s much more about that one racing line. Of course sand is more of a struggle for weekend warriors because it is both  physically and mentally demanding. ”

Can you compare your MX2 team mates, Thomas-Kjer Olsen and Jed Beaton?
De Wolf: “They are without a doubt two very hard workers. They want to go for the best possible result and you can see they do everything to get there. Both “TKO” and Jed have a lot of fighting spirit, they don’t want to be outdone by the other! Beaton is also mentally strong. Before Hawkstone Park he didn’t have a gatedrop in eight months, but he immediately showed decent speed. Also how he deals with his back injury now shows how strong he is. Thomas is quite big for a 250 but he copes well. He has a good style and adapts perfectly. ”

Thank you for the interview Kay.
De Wolf: “You’re welcome!”