Interview: Kade Walker on racing the British Championship & his future 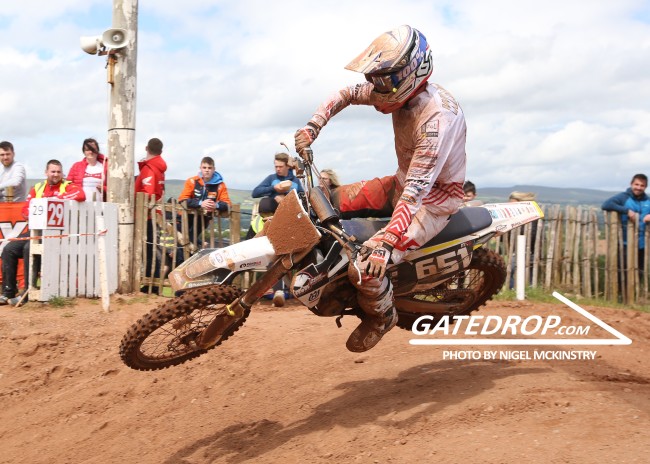 Desertmartin hosted round five of the Maxxis British Championship and Kade Walker secured a last minute entry to contest his first ever round of the British series.

Walker who was born in Canada but has spent the last seven years in Europe used a practice bike from Adam Collings so it wasn’t easy for him but he showed some pretty good speed despite some bad starts and crashes.

Walker ended up seventh overall which isn’t bad going considering he was on a practice bike.

We caught up with Walker to talk about Desertmartin, his plans for the future and much more.

Gatedrop: Kade, we are here in Ireland, you’ve came a long way to be here but can you talk me through both your moto’s here at Desertmartin?

Kade Walker: The moto’s were pretty good. It was difficult on a stock bike, a practice bike from my buddy.  It’s not the best so the starts were bad, after that it’s hard to come from behind to try and get in the top five with those guys. In the second moto,  I had a bad start again and I crashed three times, that didn’t help me, I’m not even sure where I finished (Kade finished tenth in moto two).  All in all, I think this is one of the funniest tracks I’ve ever been too.

Gatedrop: You must be happy about the first moto, you got a bad start like you said but when Walsh passed you, you were able to follow him for a bit which was good.

Kade Walker: Yeah, that was fun. It was fun to follow Dylan (Walsh) because I’m on a stock bike and I saw that bike and I was thinking, I must be riding pretty good. I had fun the whole time actually, I had no arm pump, nothing. It was just so much fun and awesome.

Gatedrop:  Just how difficult was it riding the standard bike? Those guys at the front have fast bikes to say the least.

Kade Walker: Those guys are on the best bikes for sure. Being on a stock practice bike kind of sucks but you have to do what you got to do. I’m here to try and get something, maybe get a ride and a deal. If somebody wants to give me a fast bike then I will send it on a fast bike too. It’s no big deal for me.

Gatedrop: This is the first round of the Maxxis British Championship you’ve rode this year. Just how did the opportunity come about?

Kade Walker: It came about because I live in Holland, I’ve been racing the Dutch Championship but there’s no races for about two months.  I thought I’d ask around and I asked Adam (Collings), if I could use his practice bike and he said sure. I got on a plane and flew out pretty much. I’m sending it around the world and it’s pretty fun.

Gatedrop: Have you any plans to do the rest of the series?

Kade Walker: I can’t race the next round of the series at Hawkstone because I have a Dutch Championship but I will be at Foxhill for sure.  I don’t know about the last one yet but for sure Foxhill.

Gatedrop: Just on the track, what were your thoughts coming over here and did the track exceed your expectations?

Kade Walker: I’m telling you right now, I’ve been to GP tracks that are not as good as this one for sure. I think if you are going to have a GP then you should have one here. It’s a beautiful country, it’s chilled, peaceful with a bunch of sheep and stuff like that.  You get here and it’s like the Motocross oasis, you know? It’s kind of in the middle of nowhere but it’s a perfect track.

Gatedrop: It seemed to be pretty fast out there and didn’t get as bumpy as I thought it might have. It also seemed one-lined which would have made it hard for you with the bad starts. How did you find the track?

Kade Walker: It was pretty hard to pass. I think it should have been bumpier too, I think you need more races and more classes. It would make the track bumpier but it was still pretty gnarly in places.

Gatedrop: I know next year will be your last chance to do a full MX2 or EMX250 series due to the age rule. Which championship would you prefer to ride next year and I’m guessing you’d like to be in the GP paddock?

Kade Walker: I would love to be in the GP paddock but to be honest with you, I have had a go for a long time and I think I just want to be on the podium in EMX250. If I could be in the top three overall in the EMX250, for sure I want to stand here and say I want to win the title but as of right now I’m not in a position to make top three or first. If I have the chance, top three would be the goal.

Gatedrop: I know you are a Supercross rider too, do you plan on doing SX during the winter? I feel that maybe doing it means your not as prepared for Motocross when the season starts.

Gatedrop:  You rode the MX2 World Championship in Valkenswaard earlier in the year. Do you plan on doing any more GP’s this year?

Kade Walker: I’m not sure yet if we will do some more GP’s. It all depends on the team that I am with right now. If they want to go there then we go, maybe we will go to Lommel or Loket. As of now, I don’t think so which is sad. Maybe I will do something at the end of the year in EMX250, just one race for fun but other than that, nothing.

Gatedrop: You were born in Canada, just how long has it been since you’ve been back there and do you miss it?

Kade Walker: It’s been since the beginning of 2013 so around seven years I think.  I don’t really plan on going back, I’ve raced so long in Europe and I’m having fun here. I don’t know, I have always found Europe like my playground. Anywhere I want to go, I just go but if I go back home then opportunities will disappear. Honestly, I’m scared to go back home plus I have a family over here and a girlfriend, stuff like that. It feels more comfortable in Europe than it would in Canada.