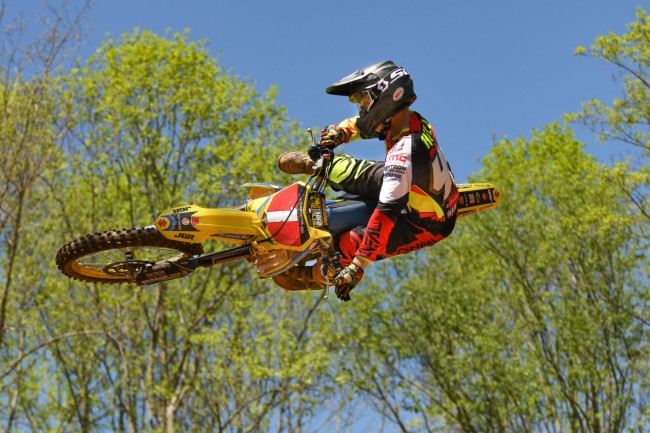 Justin Hill is a thinker. Articulate and intelligent, the JGR Suzuki rider thinks before his speaks and analysises situations.

It’s perhaps one of the reason he does better in supercross than motocross, he prefers the technicality of it all and doesn’t like just holding a bike wide open around a disced up motocross track.

He also has his hobbies away from the sport, loves two-strokes and simply cant wait to get on a 450 full time in supercross next season. In many ways he reminds you of young Jeremy McGrath who also had a nice balance between the sport and the rest of his life.

Doug Turney caught up with Hill while he was testing for outdoors at the JGR facility to get his thoughts on the upcoming motocross season as well as an insight into what he likes to do away from the track.

Really my plan is to just try and showcase the bike as well as I can and that is by winning! So I am going to go for it. My first impressions from hitting the outdoor track, I have way more outdoor time on this bike since I raced on them as an amateur than I did on supercross. Right now I feel very comfortable. I actually feel awesome, it’s burning my lungs a little but and making a couple of things sore that you don’t feel in supercross!

We are making more power by the second and everything is coming along. I don’t have an outdoor win so that is the plan I have to get a win. This is my last season on a 250 season ever so I am looking forward to trying to make it the best one that I have had. The chassis is so good when I go into turns and go through bumps, it’s a really solid chassis, I am having a good time, for the first time in a while I am really enjoying outdoors.

The differences between supercross and outdoors

For some people one is probably easier than the other. For me supercross is easier by nature, I feel I can get a flow and the rhythms and everything comes easier in supercross to me. but if I implement that I think it can come just as easy, it isn’t as busy, you have a lot more just gassing it and holdling on type stuff.

My game-plan is to implement my supercross style outdoors, jump the bumps and do things that are sneaky and try to get around the track more economically, hopefully that will translate into better times. If you burn yourself out for 35 minutes, just hitting every single nook and cranny on the track, it tires you and it’s never quite as good as it could be. So the physical challenge I’m hoping is going to be less with where my head is at this time.

Outdoor tracks that suit his style

There are a couple with enormous jumps that you can’t help but jump and that’s what I like. Red Bud is one of those and I had a terrible year last year outdoors but I got fourth or fifth in a moto there and was pretty solid I was way under prepared and half injured, so it was a throw away season but I saw there I could do pretty good if I ride that way. Washougal is not, it takes finesse because the ground is tricky but it doesn’t take any rhythm so I wouldn’t say that suits my style but it is warm and cosy because I can ride it blindfolded (Hill’s home national).

Millville I haven’t really done well there but I have some plans and ideas how to bring my style forward to there. I really like Indiana, that’s a really fun track, it takes a lot out of the bikes, but it is a heck of a time riding that. Glen Helen isn’t my favourite even though it’s my only podium, the year I got a podium there was big jumps and made everything technical and I was like ,’Sweet!’ and I did good! Hopefully they do more of that this year, I hope they rip it less and do more obstacles, because ripping it ten feet deep and watching us go, ‘braaaaaaaaaap’ around the whole track is not fun to watch or do, so I hope they create some obstacles and keep it old school that would be cool!

Everybody is pretty laid back but everybody is do their job and is very smart, we don’t lack anywhere. At times before I would sit there and scratch my head and think if only we had this guy or did that, but I don’t think that around here. I’m hanging out and everything is well taken care of. The biggest thing they are good at is respecting who you are as an individual. There is definitely a longer leash and that is good for me because my best level is when I can do things how I want and I love it here, I wouldn’t want to go anywhere else or leave this area I love it.

We can take a broken part to the NASCAR shop and they test it and tell you what happened, what else could have happened and tell you in hard cold science fact within 24hrs, it is way above my head!

I have so much more confidence on the 450 that I can do anything that the track will require. I think on the 250 you stress about it more, if the bike will be able to get over it or an obstacle is difficult. The 450 is heavier and it can spit you if you get out of shape for sure but I think I make less mistakes and I can use the power to my advantage to get out of situation on little bikes that I was never able to do.

People say I am having a good 250 career or whatever but I am like, ‘ I am just trying to get through this damn thing so I can ride a 450!’ I have said it, this RMZ250 I love it, it’s awesome but the 450s are where it’s at and I have been trying to get there for a long time and I am thankful that Joe Gibbs racing has given the opportunity to come on.

I just like 250 two-strokes, I think they are cool. I rode them a little bit when I was a kid. I found one and had my eye on it a for a little bit and dropped down and checked it out. I have to rebuild it but when I do will put in some laps and share some videos.

I bought it from a random guy, he had this look on his face that he couldn’t figure out who or what I was, then he  asked  my last name and realised it was me. The other guys didn’t know who I was so he was telling them, ‘ this guy rides for Joe Gibbs,’ and they start flipping out, looking me up and taking Instagram. It was pretty funny.

I am definitely mechanical, I work on cars and I enjoy working on bikes, that’s why I got a two-stroke – I hate working on four-strokes! As soon as the sport went to four-strokes it just went over my head. I have rebuilt engines and stuff but they are just so complicated.

I have so many projects, that’s what eats my time up. I have cars, I make music all the time – I have endless amounts of not finished things!

Ilike to link up with the team and hang out. This is probably the most social I have ever been being here with this team. Previously I was normally in my house just doing stuff I like to do. My brother is the opposite he always has his crew, but I like me time, that’s for sure!