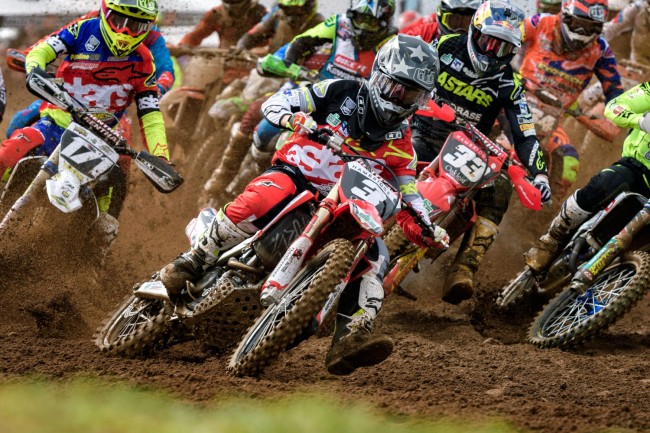 20 year-old Josh Gilbert was always a rider with promise but last weekend at Culham he delivered on that promise in style, going 2-2 for second overall his best ever result in the British championship.

Gilbert has been building himself up each year in the British scene and began really making people stand up and take notice of his talent and smooth style with some impressive performances last year, but for 2018 it appears Gilbert has went to another level.

We caught up with the Dave Thorpe Honda adventure centre rider to get his thoughts on the best day of his young career.

Two second places and on the podium at Culham, did you expect that for the first round?!

Not really, last year I think my best result was a sixth. Going in I was aiming for a top really, I had a good off-season, I have been feeling strong and everything. I thought if I could come away with around two fifth it’s would be a good day.

You were up front, did you feel the pace or the intensity trying to stay with Conrad or did you feel comfortable at the sharp end?

The first race when I holeshot – I had never holeshoted a moto before ( in the British championship) so it felt a bit strange -I think the last time I holeshoted I was in MXY2! So it was a bit of difference, but you could breath a bit more and ride the lines you wanted and everything, it was a better. I could relax more. When Conrad got behind me and passsed me, I did make a few little mistakes when he passed me straight away. I took a lap to regroup and once I re-grouped I just settled for second really. Conrad is a step above at the minute and with doing the world championship it has dragged him on and it showed that at the weekend.

Does this change your goals for the rest of the season?

On your EMX250 race in Spain, you had a time that would have qualified you in the top 36 but because they don’t merge the times you didn’t get? That must have been a frustrating weekend?!

It was one of those days where things didn’t go to plan – it was a long way to go really to find that out. I did more laps in qualifying than anyone else, so it wasn’t lack of effort. I was 0.1 of a second out from qualifying and in the first group that would have given me a top ten position! So I was a bit annoyed with that and then in the LCQ I ended up going into the first corner and two bikes in front of me came together and I had nowhere to go, so I hit them and then bent my radiator and couldn’t continue – so that was the end of that really!

Does the speed you still had there and your speed at the weekend plus Martin and Mel winning a moto each in EMX250 give you confidence you can do well once you get into the races?

Yeah, I beat Mel at the weekend and Mel won a race in Spain. When I was watching the races it was a little bit frustrating knowing I should have been there but it’s the way it goes sometimes – it’s just the highs and lows of motocross!

I remember you racing in MXY2 and moving into the adults you were very smooth, but the last couple seasons you seem to have went up a level in speed each winter yet still retained that smooth in control style, how were able to increase your speed but stay smooth and not increase your risk?

I think my confidence has grown a lot more recently. I have been practising with Jake a lot recently and he’s really good company. We went to Spain at the end of January and that helped so I have been putting the work in. I don’t really know but I just seem to have taken that next step, it seems to be going well and I feel in control and that’s how I like to ride really?

For the rest of the season are you concentrating on the British and EMX250, no plans for MX2 GPs?

No I haven’t really thought about that yet. The main concentration is the MX Nationals and the British MX2 then I will do selected EMX250 still. This is the first time I have been racing full-time and if I was to get a paid ride for next year that will probably be in Britain, but then again if I did a couple of EMX250 races and get good results in them then you never know I could maybe get picked up by a team there or something. We will see how it goes this year and see the deals that come in at the end.