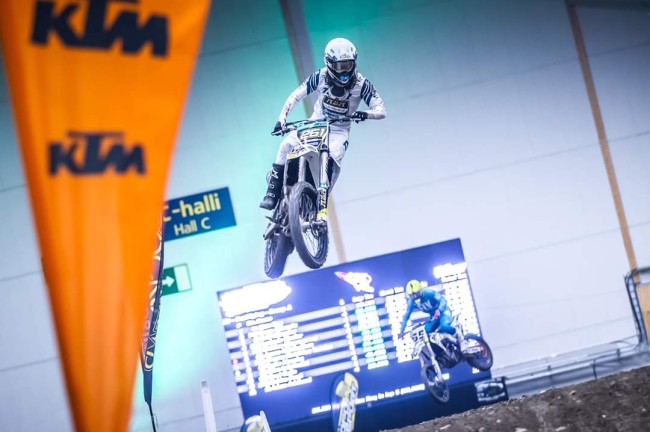 The young Estonian had a great season and finished fourth in the EMX125 series but will move up to the 250cc in 2020 where he’ll focus on the British Championship as well as the EMX250 series.

There’s no doubt that Talviku has a lot of potential and will be one to watch for during the season ahead.

We caught up with Talviku to discuss the move to his new team and much more.

Gatedrop: Jorgen, a few weeks ago it was announced you’ve signed with the ASA United Husqvarna team. Just how did the deal come about and was it difficult in getting the deal done?

Jörgen-Matthias Talviku: I think it all started, when I raced at the end of the season last British and National round. I showed pretty good speed there and after that trip, my good friend Harri Kullas talked with some people, and it all went down to Lee Tolan, from the ASA UNITED HUSQVARNA team. We went to England and met with the team, and everything went well there. Basically it was pretty clear to me, at the beginning, that I wanted to belong on that team.

Gatedrop: I believe you raced a Supercross in Finland with the new bike and team last weekend. How did that go for you?

Jörgen-Matthias Talviku: Yeah, everything was pretty late for that, because we met the team week before the race, so to put together every peace for that event was crazy, but we managed to show something what is going on for next year, so it was awesome. About the race, this year the level was very high there, with some USA guys, and for me it was pretty much up and down. I showed some good speed, learned a lot and gained new experience.

Gatedrop: What’s your first impressions of the Husqvarna and the 250cc?

Jörgen-Matthias Talviku: I think the Husqvarna is pretty much the best bike for me and suits me very well. When I compare 125 to 250, then I think 250 is better for my riding style, I felt it right away, when I made the switch. I feel very relaxed and comfortable on the bike. I need to grow my strength and muscles now, to be ready for the season.

Gatedrop: You rode a round of the EMX250 series this year in Latvia and done really well. Did you surprise yourself that day and where you happy with your EMX250 debut?

Jörgen-Matthias Talviku: I think it was some of the highlights of the year for me. I really surprised myself, about my speed compared to other fast guys, and also my starts were on point with a stock bike. It was a great debut in the EMX250 class, in front of my sponsors and Estonian fans.

Gatedrop: This year you finished fourth in the EMX125 series, one of the most improved riders in the class I feel! What where you expecting coming into the season and reflecting on it are you happy with the season?

Jörgen-Matthias Talviku: Thank you for that. After good preseason races in Italy, I gained a lot confidence to do well in EMX125 series. So I made podium in the first round, and hopes were very high, after that. I had some bad races in the middle of the series, and hurt myself, but at the end of the season 4th place was good for me, because I showed potential, and as we can see now, people recognized that!

Gatedrop: You were with the A1M team and worked with Tanel Leok. How was it working with him and what sort of things did you pick up from him?

Jörgen-Matthias Talviku: I am very thankful to Tanel and all the A1M squad, that they picked me up last season, and helped to get me there, where I am today. Tanel has a lot of experience, so it was great to learn motocross, from his side. Very hard working guy, with big heart. Thank you!!!

Gatedrop: You contested the last round of the British Championship this year, how did you find the weekend and what’s your thoughts on the series?

Jörgen-Matthias Talviku: Harri Kullas invited me to UK, and his team Cab Screens helped me to race there. Definitely had a good time over there, and I had to say big thanks to Lee from Cab Screens and to my trainer Harri!!! I really liked the British series and tracks were well prepared, so it’s good to race there in the upcoming season.

Gatedrop: Harri Kullas is your trainer, how is it working with him and how does he help you?

Jörgen-Matthias Talviku: Harri has helped me since the end of 2017, to prepare my physical condition and also riding. Harri is really smart and a fit rider, so there are many things to learn from him. I can say now, he is a very good friend for me, and I think that’s why things are going in right direction. Thank you very much Harri!!

Gatedrop: For 2020, what’s your expectations for the British series and the EMX250 series?

Jörgen-Matthias Talviku: I want to enjoy the full season of racing! I love to have fun on the bike and to improve every round. Consistency is the key for the season!

Jörgen-Matthias Talviku: I want to thank Lee Tolan from ASA United Husqvarna team for giving me such a good opportunity. Also I want to say a big shout out to all the team sponsors and my own private sponsors!! See you in 2020!