Interview: Joel Smets on his son, Vialle, Hofer and KTM 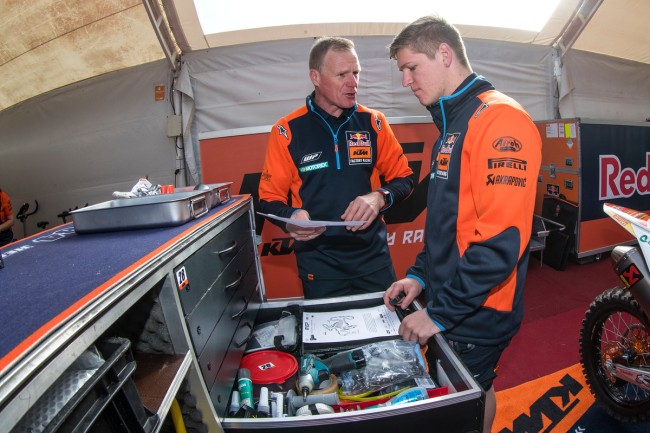 Joel Smets, a former world championship himself is now part of the very successful Factory KTM team in the paddock.

With Prado winning the title last year and heavy favourite to win it this year, the team took what was seen as a risk by signing French rider, Tom Vialle.

The French rider has improved a lot working with Joel Smets and grabbed the opportunity with both hands and sits third in the MX2 World Championship which is very impressive – he’s proving his doubters wrong.

We caught up with Smets to discuss Vialle, his son who also races and much more.

Gatedrop: Joel, overall it was a pretty good day here for Tom Vialle at a track that maybe isn’t his strongest. Are you happy with his performance?

Joel Smets:  Yes, very happy. He still needs to learn a lot in the sand, as well as in the hard pack but also in the sand he’s making quite good progress.

Gatedrop: Compared to this time last year riding in the sand, he’s improved a lot so I’d say he had a good winter?

Joel Smets: Of course. That we’ve seen already in the GP’s, especially in the sand. If you are born in the south of France it’s not so easy to be fast in the sand and that’s just a matter of time to improve.

It’s putting hours and hours so we need to give him a bit of time to develop. Technically we’ve already worked quite a lot on the technique and stuff. He has also for the sand a pretty good technique which should allow him for good progression in the sand. If you want to be fast in the sand, it’s not only technique but it also comes with muscle and physical power which is what he is lacking a little bit. That comes together a little bit, speed and muscle, physical power, it will come together, it’s just a matter of time.

Gatedrop:  I feel like people always forget that you’ve also got a son that races! How was it watching here at the Zwartecross and are you happy with his progress? I feel like he’s improving all the time.

Joel Smets: Yeah, he’s doing well. Today was a really good day for him, I’m really pleased with those results. He’s got an opportunity to do the EMX250 championship so he’s preparing for that. We’ve made a plan with that, together with DIGA KTM Racing. Today was one step towards the EMX250 round in Lommel. Today he did two very good solid races so I am happy with the way he was riding, the way he was adapting to the bike and track. I’m a happy dad!

Gatedrop: You’re going to be pretty busy at Lommel, not only with Vialle but also with Greg racing at a higher level than usual..

Joel Smets: Yeah, I’ve experienced it in the past when he’s done some two-stroke European rounds. It’s then quite busy but in Lommel we probably won’t have anyone in MX1 yet so that helps. If you have a European rider, MX2 and MX1 then at the end of the day you have to look at the sole of your shoes – they might be warn out!

Gatedrop: What’s your thoughts on the Zwartecross event by running a festival and a motocross race, did you race anything like this in your day?

Joel Smets: Yes, I did in the past. Then it was smaller, there was only like one third of this but that was already big (laughs). Already when I raced it, it was still in Halle and there was around 30-35 thousand spectators. I thought it was already massive but it’s exploded, it’s grown so much.

We have to keep on evaluating, how we can implement really world class racing with a festival. They both need to go hand in hand, it needs to be a win win situation and that’s not always easy. With such a big crowd and implementing the crazy cross and stuff like that isn’t easy but I’m a fan of it. I mean by combining it this way, we are bringing the sport to the people and that’s important I think. It’s not like cycling, tennis, soccer or formula 1 were the people will always come to the sport. With motocross sometimes we have to bring the sport to the public. You can see there’s a lot of people visiting the festival but once the races are on, it’s a massive crowd out there also watching the real racing. That means there is some interest but we need that interaction and I am a fan of it.

Gatedrop: Just on Tom Vialle, some French riders are known to be hard to work with but what’s he like to work with?

Joel Smets: Yeah, he’s very un-French (laughs). He’s not as stubborn as some of those Frenchies are. He really understood when we signed him and that was also important in the negotiations It was important he clearly expressed his wish to step out of his comfort zone and to make a jump out in the dark, let’s say.

For him, he knew it would be a jump in the dark but that it was the way to do it and his family as well. It was very important and the results have proven it. Okay, good results always brings good moves and good vibes. The day when it’s a little bit less might be more difficult, then everyone is a little bit more grumpy but so far coming from were we did in the winter to now is just an incredible journey. I think it’s actually not so often seen in Motocross that a kid makes so much progress in such a short time.

Gatedrop: What’s the latest on Jeffrey Herlings, do you know when he’ll be back on the bike and what race he could make his return to racing?

Joel Smets: He is not going to be on the bike this week. He will probably start riding between Loket and Lommel so he’s not going to ride at Lommel. 10 days after Lommel we have a national race in Belgium, a sandy race and that we have in mind but of course it will all depend how it all goes when he jumps on the bike.

Gatedrop: Just on next year, KTM’s MXGP budget isn’t cheap with Herlings, Cairoli and Prado. Do you know yet if there’s plans for signing a team mate for Vialle or could Hofer get promoted to MX2?

Joel Smets:  At the moment, not yet. At the moment the deal is still to be two times two line up. Prado and Cairoli with Claudio’s side and Jeffrey and Tom in our side. The plan with Hofer isn’t actually completely clear so we still have to decide whether we do EMX250 again or do selected rounds of the MX2 World Championship. It’s unlikely that he’s going to be a full time MX2 World Championship team member.