Interview: Jeffrey Herlings on Valkenswaard and battling with Gajser 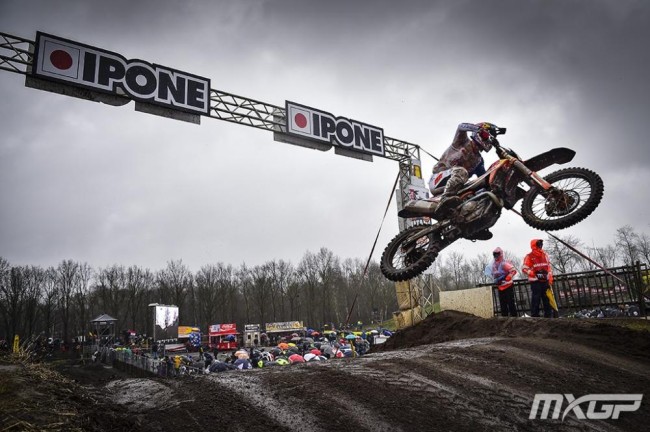 We are only two rounds into the 2020 MXGP World Championship season and despite only winning two out of four races, Jeffrey Herlings has won both at Matterley Basin and Valkenswaard. Both tracks offering completely different conditions but that’s what makes the MXGP riders the best in the world when it comes to Motocross – they can adapt to all sorts of conditions.

Despite not winning the first moto at Valkenswaard, Herlings went out in the second moto and it was vintage Jeffrey Herlings in the sand as he lapped up to fifth in what was a sensational ride.

We caught up with Herlings to discuss his home GP and more.

Gatedrop: Jeffrey, that’s your ninth win here at Valkenswaard, was that maybe the hardest one yet with how the second moto went?

Herlings: No, I don’t think so, I’ve had some harder ones.

Gatedrop: In the sand, I’ve not seen you being pushed before except for Cairoli at times. In the second moto today, is that maybe the most you’ve been pushed by Gajser? You rode amazing to lap up to fifth but for him to follow you for a while, you both rode great!

Herlings: Yeah, I think it was a very difficult one. In 2013, I had to fight until the last few laps to win the overall, 2017 I didn’t even win but never the less I’ve had some easier wins here as well like 2014, 2015 and 2016, they were a walk in the park. But today I had to really work for it, Tim was really good and as you can see the guy has really stepped it up in the sand. He’s racing really good so it’s going to be a good year of racing hopefully.

Gatedrop: Do you think that Gajser can push you the way you’ve never been pushed before or maybe he already is?

Herlings: It’s hard to say. in 2018, I had to push every weekend really hard with Tony (Cairoli) but it’s hard to say. Tim (Gajser) is not a three time world champion for no reason, you might win a GP by luck but you don’t win three championships by luck, it means he’s high class and a top rider and athlete. He will be one of the biggest competitors for this season, I’m not counting out the other guys but as it looks now we are going to have many battles. Hopefully I will race him clean and he will race me clean and may the best one win. It’s going to be a good year hopefully.

Gatedrop:  In 2018, you only lost a few moto’s in the whole season and this year you’ve lost two already but have won both GP’s so that way it’s looking good.

Gatedrop: With the way Gajser rode today, in hard pack it could be pretty close so that must give you something to work towards?

Herlings: We will see. England was pretty muddy so it wasn’t really a hard pack circuit and the track was different, it was the same weekend.

Gatedrop: In terms of your preparation coming into the season, I know you’re thinking about the championship this year and lasting the season but did you change anything over the winter?

Herlings: Definitely we tried to be more consistent. I mean in 2018 yeah I was consistent, I almost won everything but I still broke a collarbone and missed a race. I can get lots of second place finishes for not even participating at that one race. We will see, many things cam happen, it’s going to be a long season. We will try to be consistent and be good, there’s still 18 rounds remaining so lots can happen but I am looking forward to it . I have to give it up to the Red Bull KTM Racing team.

Gatedrop: The field is stacked in MXGP this year, you just lapped guys like Van Horebeek and Coldenhoff, that’s not normal!

Herlings: That was because of the track condition I would say. The track wasn’t how it is normally, Valkenswaard is usually more dry but this year there were a lot of lines and really bumpy. That made a difference.