Interview: Jason Meara on adapting to the 450cc 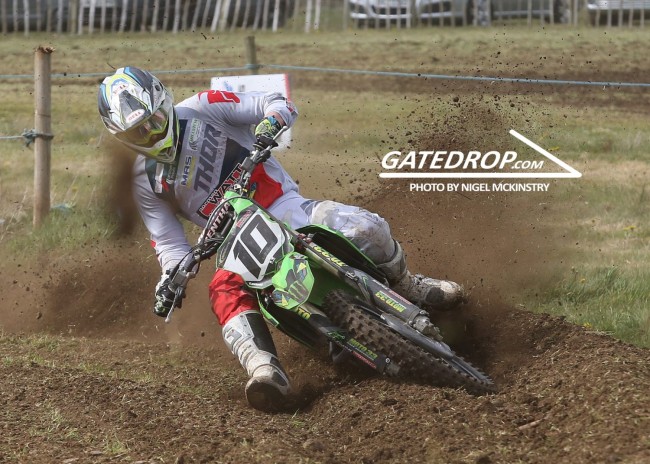 It’s all change for Jason Meara in 2019 as not only has he made the decision to move up to the MX1 class but he’s also joined his brother in riding a Kawasaki.

Meara seriously injured his wrist doing supermoto towards the end of the 2018 season and despite not having a full off-season to prepare has already showed good pace this year on the bigger bike and looks silky smooth.

We caught up with Meara after round two of the Irish Championship at Tandragee to get his thoughts on his start to the season and more.

Gatedrop: Jason, we’ve just had the second round of the Irish Championship here at Tandragee. Overall I would say there’s plenty of positives but a really bad start in the last moto really didn’t help you!

Jason Meara: It wasn’t the worst of days. It was solid, a couple of fourth’s and a win. I ruined my chances in the first race by out-breaking myself over a berm. In the second race I got the head down, got a decent start and got going to take the win. In the last race I was just riding terrible, I got a bad start and I just couldn’t get into it at all but overall it was a good enough day.

Gatedrop: In the second race, for the fans it was a great race as you and Mackrel really went at it in the last two laps. It must have been a good race to be part of and ever better to come out on top in that one.

Jason Meara: Yeah, it’s fun to be part of but when it’s hard but clean racing. That was a bit stupid if you ask me down that hill but anyway it is what it is. I came out with the win in that one but on to the next one.

Gatedrop: Everyone knows you’re recovering from a wrist injury, how much would you say is it affecting your riding?

Jason Meara: It’s hard to say because I never got going on the 450cc with a good wrist but I’m adapting to riding in a different way now. Every week we are getting stronger and better.

Gatedrop: On the 250cc you were quite aggressive but you’re looking really smooth on the bigger bike. Have you enjoyed adapting to the 450cc?

Jason Meara: I think a lot of that is coming from the bad wrist too, I just don’t have the confidence to be aggressive and maybe make a lunge down the inside of someone. I’m happy enough just to sit there and settle for a result but I’d have thought I was always pretty smooth. I like riding with the taller gear and it’s nice to be able to ride the track. The power is there now so I can ride the track rather than race the track, it’s enjoyable.

Gatedrop: I knew you’d make a good 450cc rider but thought considering the injury you’d need a bit more time to get up to speed. Are you happy with the progress you’ve made so far?

Jason Meara: Well, I sort of knew myself, in my head that I was going to be a good 450cc rider. I’d never rode a 450cc, maybe a couple of years I took a spin on one but I’ve never really ridden one. I jumped on it and that new Kawasaki is just awesome. Overall, I am really happy with the 450cc.

Gatedrop: You have rode a Kawasaki before but you were mainly a KTM man on the 250cc, what’s it like being back on a Kawasaki?

Jason Meara: Yeah, I just got the hang of it straight away. The main reason why I went with KTM in the 250cc’s was because at the time it was the only competitive bike. Any other bike was just too far behind speed wise. I was getting a bit bored of riding the same thing every year so I wanted to change it up a bit this year. Myself and John were able to put a bit of a package together and it’s been enjoyable. We are able to walk the track, help each other out with lines and stuff which is benefiting us as well.

Meara in action at round two of the Irish Championship. Pic: Nigel McKinstry

Gatedrop: You’ve never really been a good starter, I think that cost you a bit today as well. Why do you think you’re not the best of starters and is that something you’ll work on?

Jason Meara: I think on the 250cc I was a bit big for it and that was holding me back a bit. On the 450cc, I’ve had my moments so far this year but I need to be more consistent on them. I maybe didn’t have the smartest gate pick there today but overall, I’m confident that I can make some good starts.

Gatedrop: You’re also racing the MX Nationals MX1 Expert class, it must be nice to be able to race John and other new competition?

Jason Meara: It’s like riding an Ulster or Irish Championship, you’ve got the same top three guys there but you’ve a few others to throw into the mix. The tracks are obviously different which is good, it’s good to ride different tracks. You will learn a lot more, I had a solid start to the series and now I’m looking forward to heading to round two.

Gatedrop: You’ve rode British Championship races in the past, are you planning on doing any this year? I know the local fans would love to see you race Desertmartin!

Jason Meara: Well, I will see how it goes. It’s down the wrist and stuff too. If we make some more progress with then we will stick an entry in for Desertmartin. Who knows, I might do some more if we can get the funds together.

Gatedrop: On Team Ireland for the Nations, it’s obviously really early to talk about it but with Irwin retiring that possibly opens up a spot in the team. I’m sure you’d love to represent the country but there’s also John and James. Is that pushing you on out there because you’re best chance of getting selected is beating them!

Jason Meara: It’s always been a dream of mine to ride for my country. I wouldn’t really say it’s in my head at the minute. Right now I am just focusing on getting the wrist sorted, my own riding and trying to improve every week. Hopefully when the time comes I will be riding good enough to be picked.