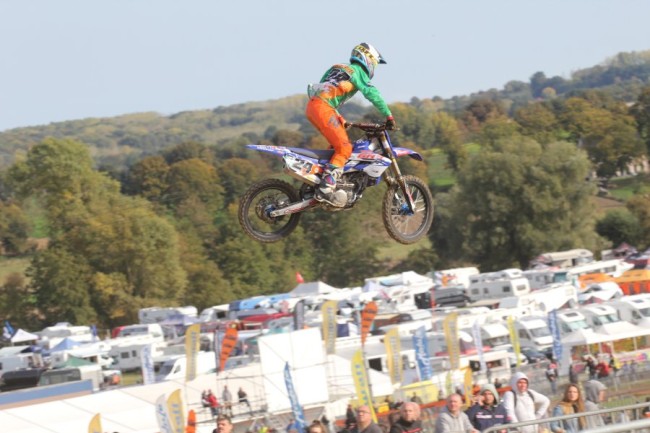 Contesting at the Coupe de l’Avenir, James Mackrel put in a superb ride as he ended up fourth overall in the U21 (Open) class. There was a lot of young EMX talents contesting the class and Mackrel showed he can be competitive with some of the brightest talents in world motocross.

We caught up with Mackrel to discuss his weekend.

Gatedrop: James, what a weekend it was for yourself and team Ireland winning the Coupe de l’Avenir. First of all, can you just talk me through your moto’s?

James Mackrel: In moto one I got off to an 8th place start and worked my way up to 3rd place and that’s where I finished. Race two I got a bad start but made good ground in lap one and on lap 4 I got a rear flat wheel and could only manage 5th place. In race three on lap one I collided with another rider coming off, I was last place and made my way back to 9th. I wish I could have got further but got held up by a few riders on my way through and just ran out of time.

Gatedrop: The event was held in Belgium, what was the track like and did it take you a while to get comfortable or did you feel great from the get go?

James Mackrel: Yeah, the track was real old school and got really rough so it suited me well. It didn’t take me long at all as I had been previously at the track and it was just the same. After about 5 laps I felt comfortable and my new YZF250 Yamaha handled great so that was half the battle.

Gatedrop: Mikkel Haarup is a huge talent, obviously he dominated and won all three moto’s but in the first moto you were only 16 seconds behind. How did it feel to race alongside him and other bright EMX talent?

James Mackrel: In race one I actually had him in front of me when I got into second but he upped it again and pulled away but I suppose that EMX experience helps with that. The whole weekend I felt fine and didn’t once feel like I shouldn’t have been there so I’m happy with my pace the whole weekend.

Gatedrop: At the end of the third moto when you and Ireland camp found out we won the U21 class, what was the reaction like? Where you’s shocked?

James Mackrel: Mick had told us before the race who we needed to finish in front of and obviously with my first lap crash I pushed hard to catch those riders in front but didn’t quite beat all the riders we needed too. I thought I threw it away but Mick then came and gave us the news that we won and it was a great feeling as no one else ever done it.

Gatedrop: You proved at the weekend you can be competitive against some top talent. Have you any plans to race any rounds of the EMX250 championship next year?

James Mackrel: I would like to but I know what I have to work on over the winter to improve so I will see how that goes and take it from there.

Gatedrop: Just on your season, you were racing the British Championship and at home, where you happy with how your season went?

James Mackrel: Yeah, I enjoyed my season this year it was a change in program racing away but I would have liked to race a bit more at home. Just the way it worked out it wasn’t possible.

James Mackrel: Would just like to get a shout out to everyone that has made this year happen as without them it wouldn’t have been possible and they kept the belief as well as I did: